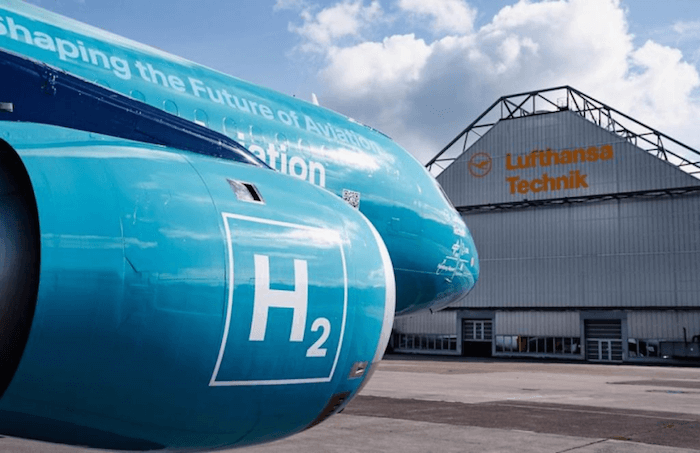 A decommissioned Airbus A320 is being given a new life as Lufthansa Technik’s Hydrogen Aviation Lab, Hamburg’s new field laboratory for testing maintenance and ground processes for future hydrogen-powered aircraft, which was unveiled on Friday October 28th. Hamburg’s Senator for Economic Affairs Michael Westhagemann – whose ministry funded the joint project between Lufthansa Technik, the German Aerospace Center (DLR), the ZAL Center for Applied Aeronautical Research and Hamburg Airport – inspected the repurposed Airbus A320. The presentation of the Hydrogen Aviation Lab marked the start of the installation of the hydrogen components in the coming months.

We are following two strategic goals: the development of a hydrogen economy in Hamburg and the decarbonization of the mobility industries.

The aviation industry is striving to become climate-neutral, with hydrogen widely expected to play a role as a future energy carrier. This requires not only new aircraft but also new infrastructure on the ground. Hamburg is forging a path towards such a hydrogen infrastructure: Lufthansa Technik, DLR, ZAL and Hamburg Airport have joined forces to design and test maintenance and ground-based processes for hydrogen technology. The project is funded by Hamburg’s Ministry of Economic Affairs and Innovation as well as the city’s investment and development bank.

Lufthansa Technik has prepared the aircraft, which flew for Lufthansa Group for 30 years as “Halle an der Saale”, for its crucial next stage. Over the next few months, the Hydrogen Aviation Lab will be fitted with a full suite of test systems as well as an internal tank for liquid hydrogen and an onboard fuel cell, paired with supporting ground-based hydrogen infrastructure. The plane is capable of being towed to locations at the Lufthansa Technik base and Hamburg Airport to enable real-world research of ground-based processes.

The Hydrogen Aviation Lab will make a valuable contribution to enabling the use of hydrogen as a fuel for aviation.

With the Hydrogen Aviation Lab, the project partners want to prepare for handling and maintenance of hydrogen-powered aircraft, whose entry into service is forecast for the middle of the next decade. Yet the laboratory will also spur on developers of future hydrogen-powered aircraft generations by helping optimise the procedures and safety levels during maintenance work or ground-handling.

A particularly striking example is refueling with liquid hydrogen (Liquid H2, or LH2 for short). Using current technology, the refueling for a long-haul flight could possibly take several hours. Given the pressure on aircraft turnaround times in the airline industry, this would be clearly impracticable. The Hydrogen Aviation Lab is designed to address this and many other areas of research.

Parallel to research carried out using the physical hardware of the Hydrogen Aviation Lab, the project also involves the creation of a so-called digital twin of the Airbus A320. Simulations will enable researchers to develop and test predictive maintenance methods for the systems and components of future aircraft generations. Using targeted data analyses, failures of hydrogen components and systems could thus be predicted ahead of their failure in the physical system, allowing timely replacements before component failures affect aircraft operation.