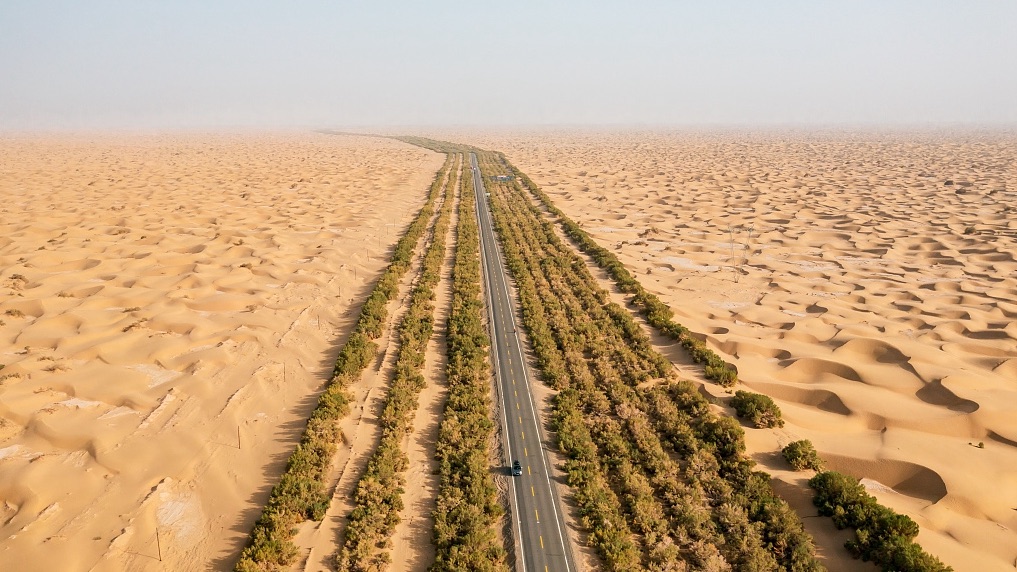 The Tarim Desert Highway, which traverses the Taklimakan Desert in the Xinjiang Uygur Autonomous Region in China, has recently lowered its carbon footprint thanks to a transformation project aimed at refurbishing the irrigation system along its shelter belt. The shrubs growing along the highway are now irrigated with the help of solar powered pumps, instead of diesel ones.

Xinhua News Agency reports that the project is estimated to cut diesel consumption by about 1,000 tonnes and carbon dioxide (CO2) emissions by 3,410 tonnes per year, according to PetroChina’s Tarim oilfield, which is in charge of the project.

Among the great dunes of the Taklimakan, the Tarim Highway is not only the largest highway ever built across a desert, but a true achievement of Chinese engineering. Its 522-kilometer route crosses one of the most extreme regions of the planet, an area of 270,000 km² whose name, in the Uighur language, means “if you go in, you can’t get out”. For the Chinese, since the time of Marco Polo, the place has also been known as the “Sea of Death”.

Since its construction in 1995, the problem to be solved has always been the same: how to prevent the dunes from burying the highway? For the first ten years, the road was permanently affected by sand, which cut off dozens of trucks transporting oil from the Tarim basin to the south and for whom the route was designed.

To find a solution, technicians built a gigantic green belt on both sides of the highway, supported by long drip irrigation lines that make the vegetation grow. In this way, the belt of bushes and small trees stops the advance of the sand and keeps the highway clear.

To maintain this enormous infrastructure, and to maintain the road open for the transportation of oil, the Chinese government has hired an extensive staff of workers who are housed at the foot of the highway. Every four kilometers there is a small blue house where a Chinese couple stays, dedicated exclusively to monitoring and repairing the irrigation systems on their stretch of highway. Each couple stays there for a maximum of two years and often has no contact with anyone else during this time, not even their neighbors.

Since 2003, the Chinese government has planted around two million plants each year, built dozens of wells and increased the dimensions of the shelter belt to around 70 meters wide and more than 400 kilometers long. The reforestation of the Tarim Highway is being studied worldwide as an example of how to develop irrigation systems in arid areas.

Eighty-six of the well stations were previously powered by diesel fuel.
In January of this year, PetroChina’s Tarim oilfield branch launched the transformation project, which sought to alter all the diesel power generators into photovoltaic ones.

In addition to the CO2 emissions reduced with the help of the project, CO2 captured by the shelter belt is believed to surpass 20,000 tonnes each year. It can help reduce the CO2 emitted by the passing vehicles.

The solar power generators are also equipped with energy storage facilities, which ensure a stable power supply and provide the maintenance workers with accessible electricity.