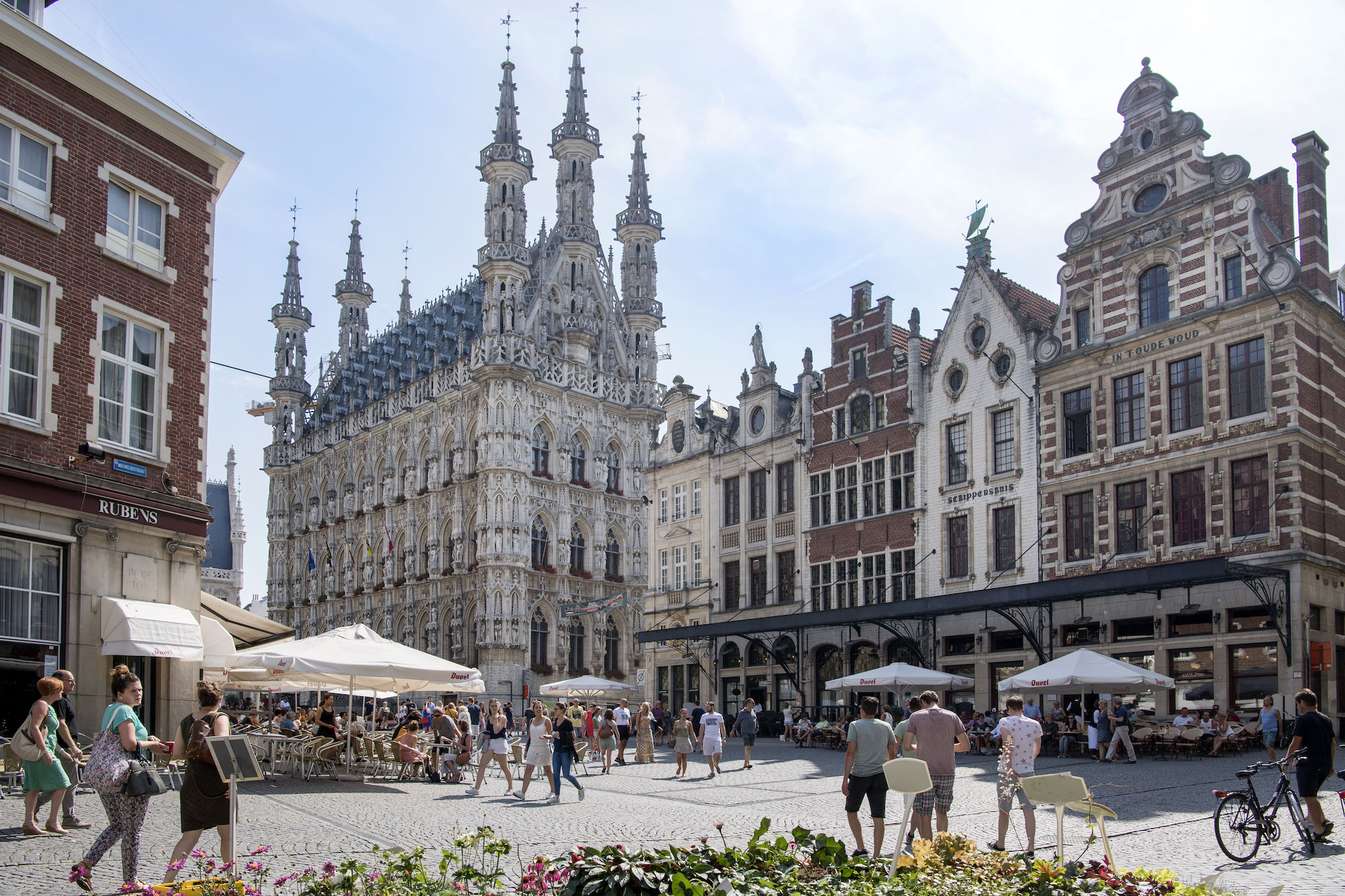 3 Hidden gems you have to discover in Venice

Have you chosen your favourite city for 2022? Until 10 February, you’ll be able to vote among 20 European cities selected by a Brussels-based organization — “European Best Destinations” — and help promote culture and tourism in Europe. This year, the featured destinations span a variety of countries, including the Netherlands, France, Czech Republic, Bulgaria, Austria, Romania and many others.

Since 2009, “European Best Destinations” has been working with major European tourist offices to  showcase the beauty of Europe. From iconic capitals, cosmopolitan cities, to hidden charming locations surrounded by nature, warming locals and interesting food, there’s no doubt that Europe has a vast amount of richness in culture and traditions.

The winner of last year’s competition was the Portuguese city of Braga, collecting a total of 109,902 votes from internet users, 72% of which corresponded to participants outside the national territory, according to the municipality.

“The media value per destination has been estimated at + 1,6 million euros (up to 10 million euros for the 1st ranked destination) and the tourist growth of + 15% (average) for the promoted destinations,“ the CEO of “European Best Destinations” Maximilien Lejeune told Travel Tomorrow when asked about the value of such competitions.

Having the largest university in the country — KU Leuven — the Belgian city of Leuven is known for its lively academic environment, attracting around 45 thousand students per year. The city, not far away from the capital, Brussels, is also famous for its brewers, clean streets and for having a large percentage of the population using bikes across the city.

Amiens is a hub between the Île de France and the rest of northern France, Normandy and Benelux. A central landmark of the city is Amiens Cathedral, the largest gothic cathedral in France. The French city has one of the largest university hospitals in France, with a capacity of 1,200 beds. The author Jules Verne lived in this French city from 1871 until his death in 1905, and served on the city council for 15 years. French president Emmanuel Macron was born in Amiens.

Situated on the Vltava river, Prague is home to about 1.3 million people, while its metropolitan area is estimated to have a population of 2.7 million. The city has a temperate oceanic climate, with relatively warm summers and chilly winters. The city has more than ten major museums, along with numerous theaters, galleries, cinemas, and other historical exhibits.

London is a destination to visit at least once in a lifetime. Combining the richness of multiculturalism and cultural activities, this rush city is rich in tradition thanks to its longstanding Royal Family. The imposing Houses of Parliament, the iconic Big Ben clock tower and Westminster Abbey, site of British monarch coronations, are some of the most famous attractions in London. Across the Thames River, the London Eye observation wheel provides panoramic views of the South Bank cultural complex, and the entire city.

Plovdiv is the second-largest city in Bulgaria and has a rich cultural heritage cumulated for 8 millennia. Sites like the Roman Stadium in the heart of the city or the Ancient Theatre, one of the best preserved in the world are must-sees in the Bulgarian city.

The city is home to a variety of Roman mosaics in the Small Basilica and the Old Town of Plovdiv with its splendid Bulgarian Revival-style wooden-frame houses dating back to 18th and 19th centuries. In September 2014, Plovdiv was selected as the Bulgarian host of the European Capital of Culture 2019 alongside the Italian city of Matera.

Vienna, Austria’s capital, lies in the country’s east on the Danube River. Its artistic and intellectual legacy was shaped by residents including Mozart, Beethoven and Sigmund Freud. The city is also known for its Imperial palaces, including Schönbrunn, the Habsburgs’ summer residence and its stunning architecture.

Graz is the capital city of the southern Austrian province of Styria. At its heart is Hauptplatz, the medieval old town’s main square. Shops and restaurants line the narrow surrounding streets, which blend Renaissance and baroque architecture. A funicular leads up Schlossberg, the town hill, to the Uhrturm, a centuries-old clock tower.

Oradea, a sub-region of Transylvania, is located near Romania’s border with Hungary and is considered a small Art Nouveau city, with a charming architectural heritage. Late fall is the best time to discover it and truly enjoy its magnificent autumn leaves.

Lahti is a traditional sports city whose iconic landmarks are two radio towers and three ski jumps. Lahti region offers lakeviews and urban nature all around. Located in Finland, Lahti is both a city and municipality, the capital of the region of Päijänne Tavastia. The city offers Finnish architecture, terraces of local artisan breweries, farmers markets and a wide range of activities in the surrounding of Salpausselkä Geopark area.

Bavaria is a unique part of Germany, with a unique culture, largely because of the state’s large Catholic plurality and conservative traditions. Bavarians have traditionally been proud of their culture, which includes a language, cuisine, architecture, festivals such as Oktoberfest and elements of Alpine symbolism. The state also has the second largest economy among the German states by GDP figures, giving it a status as a rather wealthy German region.

Lucerne, a compact city in Switzerland known for its preserved medieval architecture, sits amid snowcapped mountains on Lake Lucerne. A paradise for nature lovers, the city also offers cultural activities and a gourmet cuisine. The Chapel Bridge with the Water Tower is the landmark of Lucerne and the most photographed monument in Switzerland.

Each neighbourhood in Athens has its own unique attractions and character. From great cafés, a vibrant nightlife and the coolest shopping, Athens is the perfect choice for a city trip. One of the most iconic structures in the city, the Parthenon, makes the great contrast between the Classical Athens from ancient times and modern times.

The Irish city of Clonakilty will show visitors what life was like in rural Ireland back in the late 1880s. As part of the tour, travellers will learn the history of the famous Clonakilty Blackpudding and how it has evolved through the ages. Situated in the County of Cork, the rural hinterland is used mainly for dairy farming. Filled with a strong sense of family, tradition and Clonakilty pride, the city was recognized as the “Best Town in Europe” in 2017 by the Royal Institute of the Architects of Ireland.

The capital of Slovenia, Ljubljana, is one of the smallest European capitals with a population of around 293,000. It’s never crowded, but also never boring. The city welcomes around 50,000 university students, since university is free for everyone in the country. The capital has become an economic and cultural hub in Slovenia with an exciting mix of different cultural traditions with a green soul.

If you love History, Rome is a must see. Home to many ruins and excavations and several other historic sites like the Forum Romanum and the Colosseum, gives visitors an impression of how gladiators had to do battle in this enormous Roman amphitheatre. The Pantheon, which is now a church, has its characteristic round, open roof and is one of the best kept buildings from Roman times.

With over 900 churches, no other city in the world is so representative for the Catholic faith. Rome has four papal basilicas and seven pilgrimage churches

Unique is the ministate of Vatican City, of which the pope is the head of state.

Deemed an outstanding illustration of a Mediterranean landscape by UNESCO in 1997, the Amalfi Coast is one of Italy’s most memorable destinations. With a stunning natural diversity, the Coast is a very popular destination for upper-class Europeans since the 18th century. The Amalfi Coast has been used as a setting for several movies such as Federico Fellini’s Roma or most recently, the superhero movie Wonder Woman.

Crete is the largest island in Greece, and the fifth largest one in the Mediterranean Sea. Here, you can admire the remnants of brilliant civilizations, explore glorious beaches, impressive mountainscapes, fertile valleys and steep gorges, and become part of the island’s rich gastronomic culture.

Being home to a very diverse crowd, and holding two continents together, Istanbul is the “new cool“. Straddling the Bosphorus Strait between Europe and Asia, Istanbul is etched with thousands of years of history, bearing the marks of the Ancient Greeks, the Persians, the Romans, the Byzantines, the Turks, and the Silk Road traders who’ve lived here over the centuries.

Filled with yachts on its ports and rich people everywhere, Marbella holds its own glamorous label and is often compared to the French Riviera. Located on the southern coast of Spain, Marbella has become a luxury beach destination: there are Michelin-starred restaurants, golf courses, designer boutiques and a long chain of sandy beaches.

No wonder that celebrities and millionaires have stopped in the Spanish city for decades. For those not fancying luxury trips, there are lots of little discoveries to be made around the resort, whether it’s the renaissance palaces in the old-town or the remnants of Roman villas hidden between the luxury developments.

Considered the oldest city in the Netherlands, Nijmegen is located along the Waal river, roughly six miles from the German border. Around 2,000 years ago, Nijmegen was a Roman military camp. Later, it grew in scale and became the first settlement in today’s Netherlands to be named a Roman city, thereby granting Roman citizenship to local inhabitants. Ver recently, a perfectly preserved old Roman glass bowl was discovered in Nijmegen.