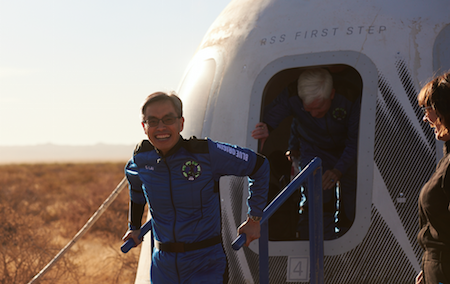 Space tourism continues to be on the rise

Blue Origin has unveiled the crew for its upcoming NS-21 mission, the fifth human flight in the New Shepard program and the 21st in the company’s history, which will carry six people into space. The six members who will be part of the mission include Katya Echazarreta, an electrical engineer and former NASA test leader, who will be the first woman born in Mexico and the youngest American woman to fly in space.

As a female and Mexican Engineer working in the Space Industry, I know first-hand how little of us there are.

Echazarreta moved to the US at age seven, and was separated from her family for five years during the immigration process. She won her sponsored seat through Space for Humanity’s Citizen Astronaut Program, a non-profit organization that seeks to expand access to space for all humanity among more than 7,000 candidates from more than 100 countries, with the intention of experiencing and sharing the “Perspective Effect”, that is, the moment when the shape of the Earth is observed firsthand while in orbit.

Echazarreta is also a co-host of the YouTube series “Netflix IRL” and “Electric Kat” on the CBS show “Mission Unstoppable”. After graduating with a degree in electrical engineering from UCLA in 2019, she worked for nearly four years at NASA’s Jet Propulsion Laboratory, participating in five Agency missions including the Perseverance rover and Europa Clipper and is currently completing a master’s degree in electrical and systems engineering at John Hopkins University.

I started helping students and women in Mexico who hear the same words I used to hear all too often: It’s not for you.

According to Space.com, Evan Dick will be the first person to fly aboard a New Shepard spacecraft twice. He was in the NS-19 mission of December 11, 2021. He is a pilot, engineer, investor and managing member of Dick Holdings, LLC. He used to be senior vice president of D.E. Shaw and managing director of Highbridge Capital Management. Victor Correa Hespanha, 28, is a civil production engineer from the Brazilian state of Minas Gerais. His seat was sponsored by the Crypto Space Agency, and he is identifying himself as the world’s first cryptonaut.

Jaison Robinson founded the commercial real estate company JJM Investments and co-founded Dream Variations Ventures with his wife, Jamie. Victor Vescovo is a co-founder of the private equity investment firm Insight Equity. He completed an “Explorer’s Grand Slam,” which is an adventurer community term for skiing to the North and South Poles and climbing the highest mountains on the world’s seven continents, including Everest. He is a commercially rated multi-engine jet and helicopter pilot, as well as a certified submersible test pilot.

So far, Blue Origin has flown 20 people to the Kármán line at an altitude of 100 kilometers, including Jeff Bezos himself and William Shatner, the actor who played Captain Kirk in the Star Trek series.

Each of the astronauts aboard the NS-21 flight will also carry a postcard in coordination with the Club for the Future, a Blue Origin-sponsored partnership that seeks through the “Postcards to Space” program to provide direct access to space to students by carrying postcards written by them aboard the company’s rockets.

According to Blue Origin, the exact launch date will be announced soon, where the six new members of the flight will be able to enjoy for a few minutes the experience of being launched into space, weightless before their return to Earth.