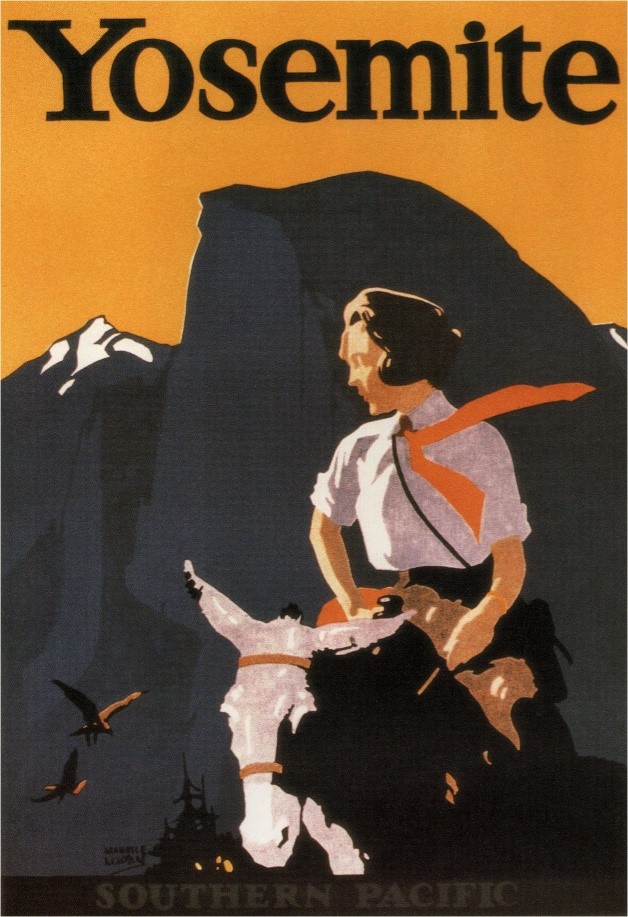 10 vintage travel posters to get you dreaming

There’s just something about a vintage travel poster. The artists behind them were expert at finding visual symbols to capture our collective imagination and celebrate the romance of travel. What’s more, the timing of the growth of the travel poster, spurred by the arrival of the three-stone lithograph process for ‘mass’ colour printing in the 19th century, the development of railways and then air travel, means these images are heavy in Art Deco and Modernist styling. They somehow speak to us of a golden, more innocent age. Here are ten of the best to get you dreaming.

Surely the perfect poster for a bedroom or bathroom or hallway. Who could fail to be uplifted by this female figure’s elegant sun-salutation as she stands before a glorious sunburst surrounded by large tropical leaves and pretty flowers?

Broders (1883-1953) was Parisian by birth and apparently a notorious cigar and good-life man. Between 1922 and 1932 he produced around 100 posters for the Paris Lyon Méditerranée Company (PLM).

This red-and-white illustration of Florence Cathedral’s distinctive basilica oozes confidence with the simplicity of its one-word message ‘Firenze’ in white font against dark foregrounded roofs. It was created by Vittorio Grassi (1878-1958) a painter, decorator and one-time typographer who worked against counterfeit banknotes for the Bank of Italy.

Harry Rogers (1929-2012), an Australian illustrator, worked extensively with Australian airline Qantas, using collage and water colour. This series used creatures iconic to each destination – a turtle for the Pacific Islands, a bulldog for Britain, and here – a multicoloured dragon and white-line drawing of carnival flag bearers.

Anyone who can make Wales look like it’s in the Caribbean gets my vote. Harry Stevens (1919-2008), who started his career self-taught, also got the vote of the Council of Industrial Design, winning their poster award in 1963.

Another self-taught artist who went into cartooning, Albert Solon (1897-1973) worked for numerous airlines including Sabena and Air France. This sun-drenched image of a plane flying away above a silhouetted palm is hauntingly nostalgic

Daphne Padden (1927-2009) was one of the few females to have the opportunity to succeed in the travel poster space. The daughter of travel artist Percy Padden, she designed for many companies including P&O Orient and British European Airways. But it is her posters for the coach company Royal Blue that I really love. She rightly avoids focusing on the coach, instead focusing on the characters at the destination in England’s south and southwest – bearded fishermen in warm sweaters and striped beanie hats are set against backgrounds of lighthouses and bobbing boats.

After a memorable four-day cross-Canada rail-trip two years ago, I just couldn’t resist sharing this stunning Roger Couillard (1910-1999) poster for Canadian railways. The streamline train certainly gave Couillard more to work with than the Royal Blue coaches of our previous artist. Here he shows its sleek form snaking through the Rockies next to a lake and I can confirm: yes, the journey really is as epic as it looks.

Osaka-born, Paris-trained Munetsugu Satomi (1904-1996) worked for all manner of well-known clients, from Gauloise cigarettes to Galeries Lafayette, but in the 1930s he returned to Japan and produced some astonishingly modern images for Japanese Railways. We can’t see a train but the sense of speed and movement here is unmistakeable.

While not many women were producing these posters, they frequently featured on them as figures not just of desire but of freedom, as in this beauty from 1923 by Maurice Logan. Notice how the subject’s cravat blows in the wind echoing the wings of the eagles beyond. Logan (1886-1997) was a member of the Oakland, California, ‘Society of Six’ – a group of artists who painted outdoors, socialised and exhibited together.

I defy you not to fall in love with Yasse Tabuchi’s 1952 Air France advert, featuring a woman clad in a pink floral kimono against a cherry-coloured backdrop where distant snow-topped mountains seem to float and an Air France plane passes forever overhead.