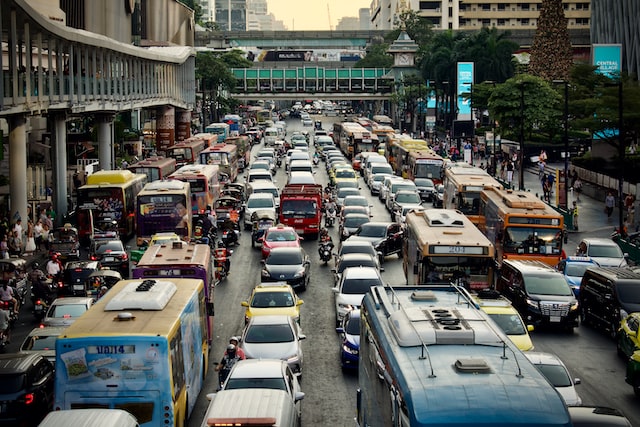 Many used cars are exported to low- and medium-income countries (LMICs) after 10-15 years in developed markets. This means their emission levels tend to be higher, which in turn could lead to an increase in respiratory health conditions. As the World Economic Forum (WEF) reports, a fair net zero transition requires accountability for the outdated carpool that LMICs are left with. Without decarbonization of road transport everywhere, such a transition is impossible.

If no proper system is in place to recollect and recycle vehicles at their ultimate end of life, valuable resources are lost and severe pollution issues arise, most notably the terrible burden on up to 800 million children through lead poisoning, caused especially from ill-managed car lead acid batteries.

“European nations have to stop exporting pollution to the Global South. A lot of responsibility lies with European and national governments that must close the – often – illegal export of old cars that are no longer fit for EU roads,” says Julia Poliscanova, Senior Director at Transport & Environment. “European end-of-life of vehicles (ELV) rules are about to be reformed in 2023, which offers a key opportunity to tackle this. Digital tools are needed to trace car movements across and beyond Europe.”

1. The impact of used car exports

Africa is the ultimate destination for some 40% of used light-duty vehicles. Central Asia receives another sizable chunk. Half of these cars do not meet the fuel economy, exhaust emissions, and safety standards imposed by their original home countries today.

Stricter penalties for illegal import of polluted vehicles are needed.

They become a major source of particulate matter and nitrogen oxides. These pollutants exacerbate because fuel quality poured into these old engines is unregulated and, hence, poor. Conversely, poor fuels pose a challenge for more modern vehicles, so both issues need addressing simultaneously. The result is deadly for the many families practically living alongside roadways, as alerted by the World Health Organization.

“Through emissions standards, emissions from cars, trucks, buses, locomotives, and other mobile sources – as well as gasoline and diesel fuel – can be reduced up to 99%. These regulations are not only critical to protect public health and environment for combating climate change, and instrumental in preventing over 40,000 premature deaths and hundreds of thousands of respiratory illnesses each year in the US alone,” says Margo Oge, who served at the US Environmental Protection Agency for 32 years, directing the Office of Transportation Air Quality for the majority of her career.

As the WEF reports, policies are set in developed countries not only to regulate the quality of vehicles produced and sold, but also to encourage consumers to demand more efficient cars and drive less. That interplay of supply and demand efforts will not be as useful, nor fair, in emerging markets. Many families rely on mobility offered with used vehicles due to their low price point, or as alternatives are often not on offer at all. Import dependency on exporting markets thus persists.

2. Used car exports on the rise

In 2015, 3.4 million used cars were exported globally, by 2019 this had increased to nearly 5 million, as reported by the WEF. The largest exporters are the US, Europe, Japan and South Korea, where approval for vehicle manufacturing and road-use regulations are most progressive.

About a decade ago, vehicles in Europe were required to consume a little over 5 liters of petrol per 100 km driven, or 130g CO2 per km. The average fuel consumption in second-hand car market-dominated developing countries is almost 1.5 times that amount today.

Countries have to stop exporting vehicles that are no longer roadworthy and fail environment and safety inspections.

Rob de Jong, the report author and Head of Sustainable Mobility at UNEP

Electric vehicles are projected to make up 70% and 50% of new car sales in Europe and the US by the turn of the decade. This transition will help address half of transport emissions in developed markets and is essential. Yet, without informed action, it will translate to intensification of the vehicle emissions gap between the Global North and South.

Not only will battery electric cars require charging infrastructure to enter the market – a challenge which even the richest nations struggle with so far – but they’ll also face ageing and end-of-life battery vehicles for which they are so far ill-equipped. The necessary circular governance and infrastructure need to be put in place quickly. In 2020, the United Nations Environment Program (UNEP) issued its first ever global overview report of the trade in used vehicles.

The ageing fleets put people at risk and will need to be decarbonized fast in emerging markets as well. ”The Zero Emission Vehicle Transition Council (ZEVTC) brings together ministers from governments that represent over 50% of the global car market and one quarter of the global truck and bus market,” said Drew Kodjak, CEO of International Council on Clean Transportation. “Council members have agreed to collectively address key challenges in the transition to ZEVs [zero emission vehicles], enabling the transition to be faster, cheaper, and easier for all. We are glad to support stakeholder collaboration for exploring measures to develop second-hand markets for ZEVs.”

Existing multinational frameworks have been slow to respond due to the complex situation – innovative multi-stakeholder collaborations could step in and step up to accelerate action to ensure that global trade of used vehicles happens in a more responsible fashion, to contribute to well-being of people, decarbonization and circularity everywhere.