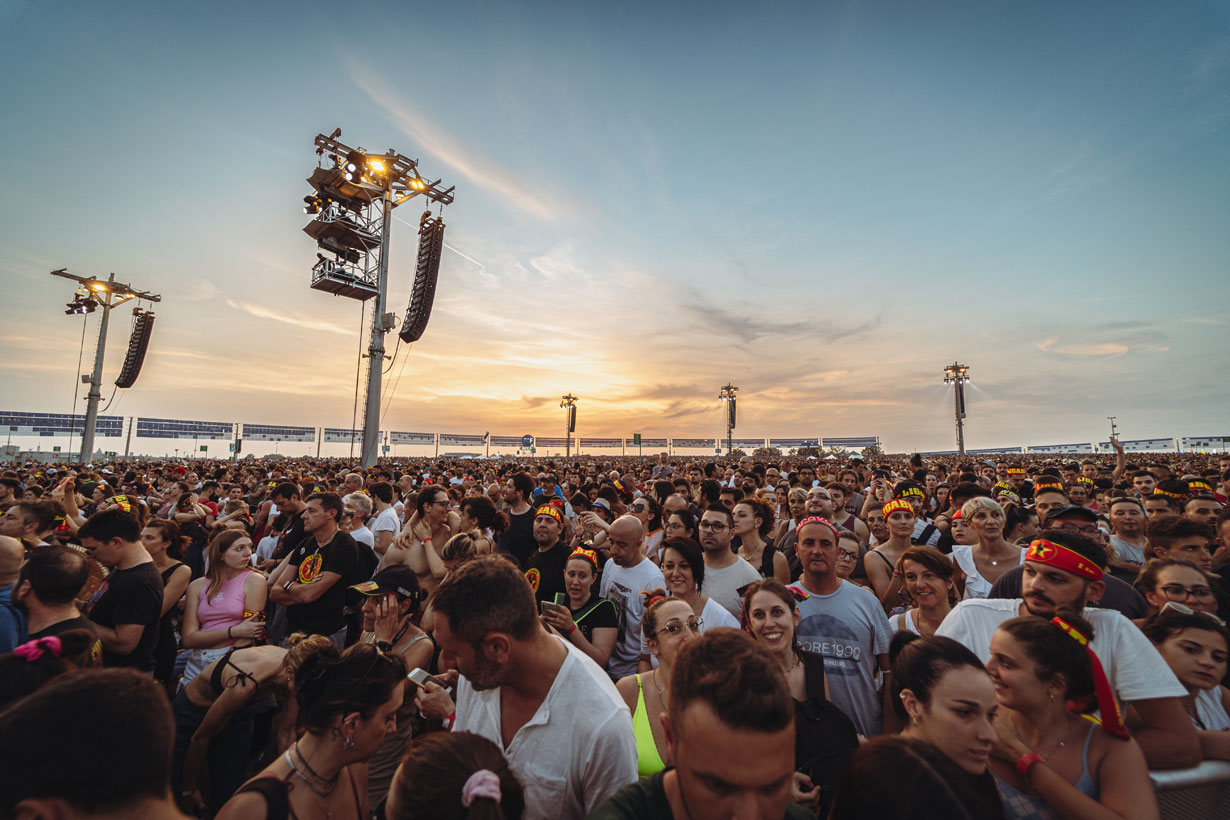 The landscape close to an airport in Italy has been transformed into Europe’s largest concert venue: the RCF Arena. With a capacity with up to 100,000 people, the location is set to host the singer Harry Styles in 2023. The 20-hectare site is located on the fringes of Reggio Emilia Airport, just outside Bologna in northern Italy. The venue was born in the airport area formerly known as Campovolo.

In the past, the site was part of a buffer zone surrounding the runway. It was mostly covered in asphalt but today most of the site has been taken up by a grass covered mound that slopes upward from the stage to give everyone in the audience a good view. RCF Arena is equipped with a total of 410 high-end loudspeakers and approximately 2 MegaWatts of sound power.

We have brought the excellence of Italian sound to an international level and today we are among the major players in the market.

The arena’s proximity to the airport means it has excellent transport links. 7.5 million people live within 1 hour’s travel time. The arena is also situated within a larger public park, which the public can access via walking and cycle paths. Because Reggio Emilia is a small regional airport, it doesn’t operate into the night. Events and their audiences are not disturbed by aircraft noise.

The arena was designed by Italian architects Iotti+Pavarani. They say this project shows how underused spaces can be re-imagined from airport buffer zones to neglected urban spaces. The inauguration of the Arena took place with a concert-event that celebrated Ligabue’s 30-year career, who performed historic concerts here. In 2015, the Italian rock artist set a European record with 150 thousand paying admissions for a single artist, already amplified by an RCF audio system. The space, covered mainly by grass, includes all the services and amenities for event production, including a proper lawn slope of 5% and a “guitar pick” configuration divided into 5 main areas to ensure optimal visibility and acoustics.

The stage is located in the lowest part of the Arena in a central position with a viewing angle of 110 ° – an optimal value for the audience to fully enjoy any event. The venue is centrally located, with airports nearby, a high-speed train station – connecting Milan, Bologna, Florence, Rome, and Naples, and has a large parking area.

“The RCF TT+ audio system, part of the flagship line of large RCF systems for live events, consists of a main system at the sides of the stage, with 4 line arrays covering the front and a further 10 systems distributed on permanent metal towers (delay towers), which can also be used as supports for video and lighting equipment,” said Emanuele Morlini, RCF System Designer. “The sound system is designed for the best sound coverage to each seat, no matter the distance from the stage. At the same time, the orientation of the system is optimized to ensure the lowest noise impact towards the inhabited areas of the city.”

We have a strong bond with this region and we intend to take care of it in the best possible way.

RCF has deployed a new TT+ line array called GTX, a brand new audio system with innovative features, distributed over 4 main arrays on the sides of the stage. Reinforcement for low frequencies comprises two arrays of suspended double 15″ modules and a sub-frequency reinforcement system on the ground consisting of TTS 56-A double 21″ subwoofers. Along with the massive GTX, additional 10 line arrays consisting of TTL 55-A modules are installed on towers. The GTX 12 line array and the GTX 15S low-range extension are part of the RCF line of TT + ultra-high performance audio systems and have been designed for the debut of RCF Arena.

GTX 12 features two 12″ woofers in an axially symmetrical three-way system with a 4PATH waveguide, while the GTX 15S hanging module houses two 15″ woofers in bass-reflex loading. The management of all parameters takes place through a new powerful high-bitrate floating-point DSP engine, the result of substantial research work by the RCF development team.