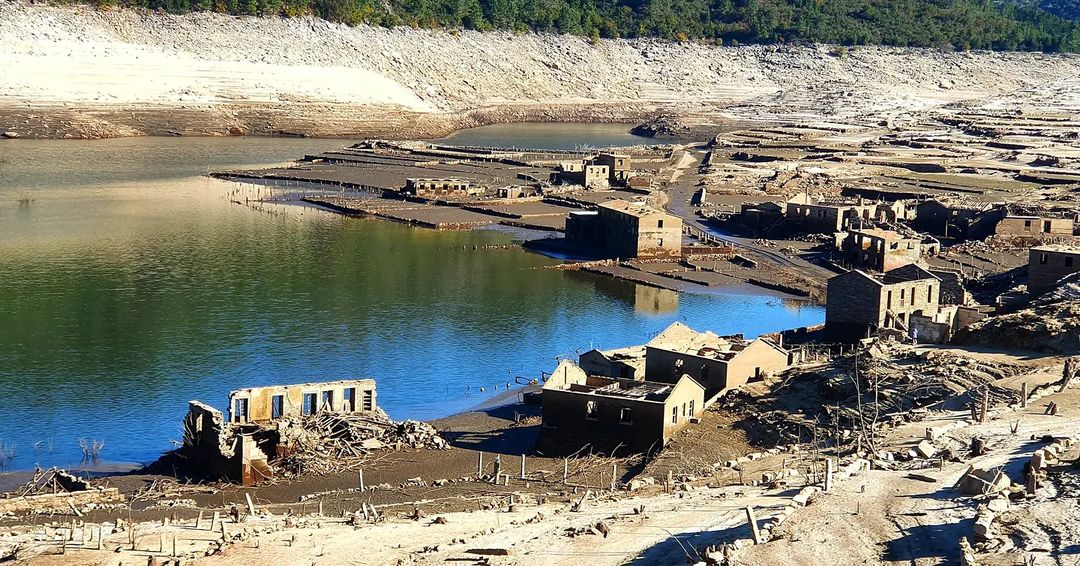 The severe drought affecting the northern border region between Spain and Portugal has brought down the water levels of a reservoir in southern Galicia, and something surprising has emerged: a ghost town. With its gray and mysterious ruins attracted the attention of many tourists who come these days to visit it.

The small town is Aceredo, a village in the municipality of Lobios, a few kilometers from the Galician city of Orense, which was flooded in 1992 by the waters of the Limia River to create the Alto Lindoso dam. It is located across the border in Portugal. Today, the dam’s body of water is at 15 percent of its capacity and the remains of the small village are again visible.

“As if I were watching a movie. I have a feeling of sadness, that this is what we are going to get over the years, with the drought, and everything we are going to encounter with climate change,” Maximino Perez Romero, a 65-year-old retiree from the city of La Coruna, told Reuters.

Visitors to the ghost town walk across the muddy ground, which is also full of cracks in some spots because of the drought. They find houses with their roofs partially collapsed and the remains of timbers that were once doors or windows. There is even a fountain from which water still gushes through a rusty pipe.

Tourists not only come, see Aceredo and leave, but there are many who stay to eat and visit other areas of the municipality.

María del Carmen Yáñez, Mayor of the municipality of Lobios

Boxes with empty beer bottles lie stacked next to what was, in the pre-flood era, a cafeteria. An old car, partially destroyed and rusted by the action of the water, rests as it drains next to a stone wall.

María del Carmen Yáñez, the mayor of the municipality of Lobios, to which Aceredo used to belong told Reuters that it was the lack of rainfall in recent months, especially in January, which had caused the emptying of the dam. But he also accused Energias de Portugal (EDP), the company in charge of the dam, of being partly responsible for a “rather aggressive exploitation” of the dam.

The Portuguese government ordered on February 1st that six reservoirs, including the Alto Lindoso dam, should not use water for electricity production or irrigation, due to the problem of the extent of the drought, which is already reaching historic dimension in Portuguese history.

The drought is also causing have a beneficial effect as a consequence: an increase in visitors. “The number of people who come, especially on weekends, to see Aceredo is brutal,” Mayor Yáñez told La Voz de Galicia.

In the early 90s, there were many demonstrations and even hunger strikes. “Many people were reluctant to sell, but soon the company had already acquired 51 percent of the land,” Francisco Villalonga, one of the residents of Aceredo at the time, told the Spanish media outlet Nius.

The date that many residents of Aceredo remember with nostalgia is January 8, 1992. On that day, a little over 30 years ago, the gates of Alto Lindoso were closed for the first time and the flooding of the village began.