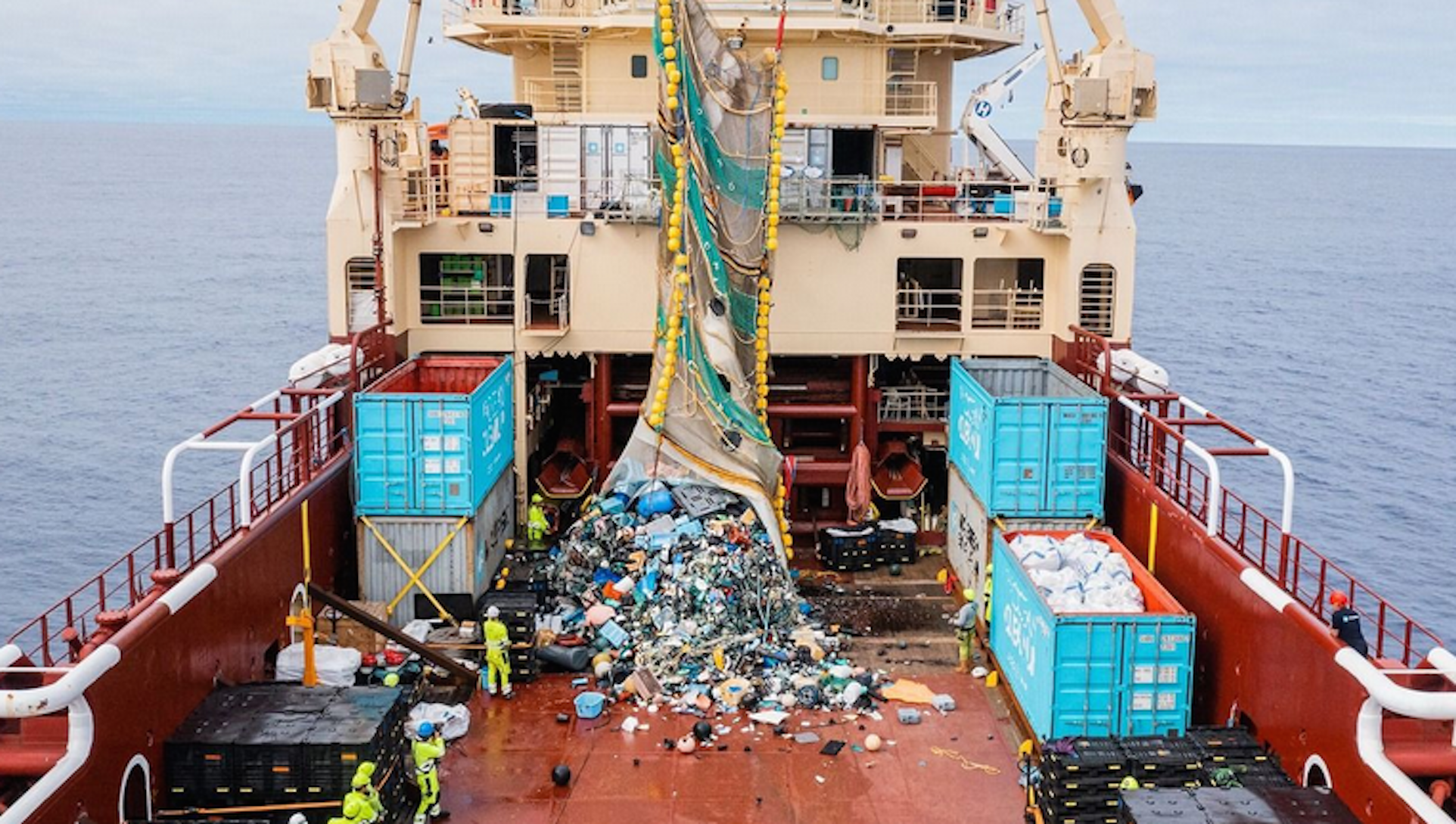 On October 20th of this year, the non-profit foundation The Ocean Cleanup announced that its System 002, the technology behind the largest ocean cleanup project ever, reached proof of technology, which means they can now start working on their massive endeavor.

Two vessels from The Ocean Cleanup finished a twelve-week trial period where their trash collection systems would be tested. Over those weeks, System 002 collected more than 63,900 pounds of trash from the Great Pacific Garbage Patch. Some of the objects collected included flippers, shovels, flippers, toothbrushes, sunglasses, and more.

The Great Pacific Garbage Patch is the largest accumulation of ocean plastic in the world and is located between Hawaii and California. Scientists of The Ocean Cleanup have conducted the most extensive analysis ever of this area.

It is estimated that 1.15 to 2.41 million tonnes of plastic are entering the ocean each year from rivers. More than half of this plastic is less dense than the water, meaning that it will not sink once it encounters the sea.

The stronger, more buoyant plastics show resiliency in the marine environment, allowing them to be transported over extended distances. They persist at the sea surface as they make their way offshore, transported by converging currents and finally accumulating in the patch.

Once these plastics enter the gyre, they are unlikely to leave the area until they degrade into smaller microplastics under the effects of sun, waves and marine life. As more and more plastics are discarded into the environment, microplastic concentration in the Great Pacific Garbage Patch will only continue to increase.

The Ocean Cleanup is a non-profit organization developing and scaling technologies to rid the oceans of plastic. To achieve this objective, society has to work on a combination of closing the source and cleaning up what has already accumulated in the ocean and doesn’t go away by itself.

Trash accumulates in five ocean garbage patches, the largest one being the Great Pacific Garbage Patch, located between Hawaii and California. To solve it, humans not only need to stop more plastic from flowing into the ocean, but also clean up what is already out there.

Floating plastics trapped in the patches will keep circulating until they break down into smaller and smaller pieces, becoming harder to clean up and increasingly easier to mistake for food by sealife. If left to circulate, the plastic will impact our ecosystems, health, and economies for decades or even centuries.

The fundamental challenge of cleaning up the ocean garbage patches is that the plastic pollution is highly diluted, spanning millions of square kilometers. The Ocean Cleanup’s solution is designed to first concentrate the plastic, allowing us to effectively collect and remove vast quantities.

To clean an area of this size, a strategic and energy-efficient solution is required. With a relative speed difference maintained between the cleanup system and the plastic, artificial coastlines are created, where there are none, to concentrate the plastic. The system is comprised of a long U-shaped barrier that guides the plastic into a retention zone at its far end. Through active propulsion, the Ocean Cleanup maintains a slow forward speed with the system.

Their floating systems are designed to capture plastics ranging from small pieces, just millimeters in size, up to large debris, including massive, discarded fishing nets (ghost nets), which can be tens of meters wide. Modeling predicts humans need around 10 full-size systems to clean up the Great Pacific Garbage Patch.

After fleets of systems are deployed into every ocean gyre, combined with source reduction, The Ocean Cleanup projects to be able to remove 90% of floating ocean plastic by 2040.