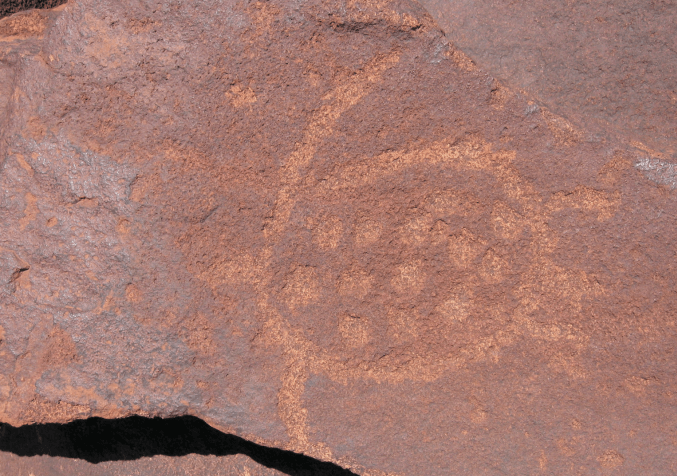 Western Australia‘s 50,000-year-old natural rock art gallery of more than 1 million petroglyphs at Murujuga, also known as Burrup Peninsula, could be destroyed within a century by pollution from industrial activity nearby. Woodside Petroleum, Rio Tinto and Yara Pilbara, are hoping to turn the area into one of the largest industrial hubs in the Southern Hemisphere.

According to ABC News Australia, seven world renowned scientists have compiled four years of research to prove that the ancient rock art at Murujuga is under threat. Nitrogen oxides, released from industrial activity, land on the rocks as dust, which then mixes with rain and dew to form acids that degrade the patina, a varnish that coats the rocks into which the engravings are carved.

Nitrogen oxides, released from industrial activity, land on the rocks as dust, which then mixes with rain and dew to form acids that degrade the patina, a varnish that coats the rocks into which the engravings are carved.

University of Western Australia world rock art professor Benjamin Smith, who led the research, said that over time, the patina would be dissolved by the acid and the petroglyphs would be permanently lost. What is in question, is the rate of acceleration of the decay caused by industrial pollution. Smith said he was unsure of an exact point of no return for the rocks, but believed it was imminent.

Murujuga National Park has the distinction of being Western Australia’s 100th national park and the first to be jointly managed in Western Australia. It is owned by the Murujuga Aboriginal Corporation (MAC) which represents the five Traditional Custodian groups of the area Ngarluma, Yindjibarndi, Yaburara, Mardudhunera and Wong-Goo-Tt-Oo, collectively known as Ngarda-Ngarli.

The national park is leased back to the WA State Government and jointly managed by MAC and the Department of Biodiversity, Conservation and Attractions. The recognition of ongoing Aboriginal connection to and responsibility for country is at the core of this joint management approach, which is underpinned by a legislative framework.

The national park is part of larger area known as Murujuga which means “Hip Bone Sticking Out” in the Ngarluma-Yaburara language, and refers to the 42 islands of the Dampier Archipelago, the Burrup Peninsula and Murujuga National Park. The Ngarda-Ngarli have been part of Murujuga for tens of thousands of years and have a deep and spiritual connection to it.

With Aboriginal people living there for more than 50,000 years the engravings (petroglyphs) have been estimated to be as old as 40,000 years. The petroglyphs are diverse, depicting a record of what was meaningful to the Aboriginal people of the Pilbara and beyond. From human figures and birds, to marine life and extinct creatures, the art provides an insight into an ancient world. Ngajarli (Deep) Gorge situated on the Burrup Peninsula is a popular site for those wanting to see these traditional engravings.

In January 2020, the Murujuga Cultural Landscape was added to the World Heritage Tentative List, which is the first required step in the World Heritage nomination process. The cultural heritage values of the area are already recognised through National Heritage Listing, which covers an area of 36,860 hectares and affords the area protection under the Environment Protection and Biodiversity Conservation Act 1999.

Thirty per cent of all plants and animals that occur in the Pilbara are found on the peninsula – an amazing statistic for a relatively small area. At least 23 plant species found here either have restricted distribution or are poorly known. Plants such as the native fig are more typical of the wetter Kimberley region, but here they grow in humid, fire-protected pockets and creek beds.

Mammals include the northern quoll, Rothschild’s rock-wallaby, echidna, euro, common rock rat and delicate mouse. Shady valleys contain temporary pools, and provide interesting wildlife homes. The Pilbara olive python lives amongst the rock piles, and evidence of rock-wallabies can be seen beneath overhanging rocks, where they frequently shelter from the heat. According to ABC News Australia, Murujuga contains the highest concentration of ancient rock engravings in the world, some of which are thought to depict the earliest known representations of the human face.