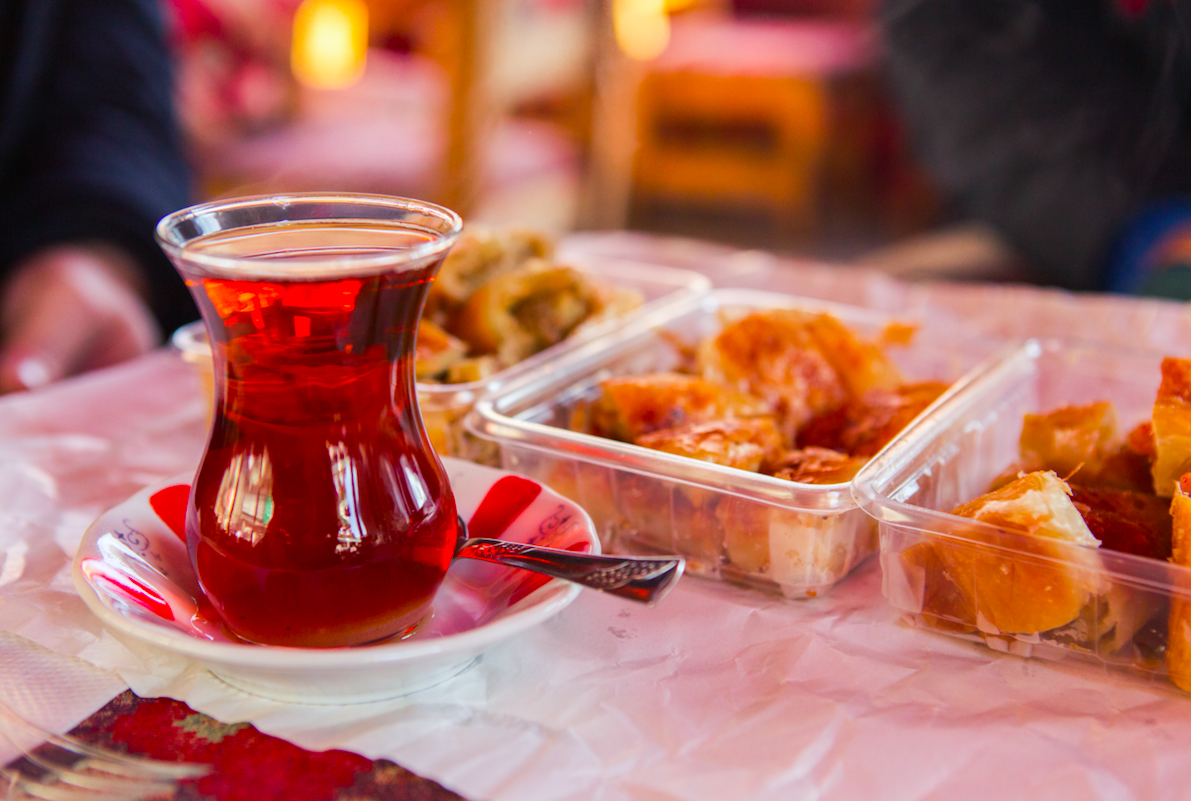 At the confluence of Europe, Asia and Africa, Istanbul is one of the world’s most cosmopolitan mega-cities. This diversity has given rise to an exceptional heritage, culture and culinary tradition.

Founded on the Bosphorus Strait in the 7th century B.C., Byzantium (which was later renamed Constantinople and then Istanbul) is heir to a prestigious past, of which forums, capitol, racecourse, aqueducts and ramparts bear witness. It was also a political capital, with a court life that was dazzling, as well as spiritual, cultural and economic. A city that connects several worlds, and has inevitably left a legacy of unparalleled richness. A destination that deserves to be visited with a guide who can depict its rich history.

In the case of the Turkish megalopolis, we opted for three experts who each present their “home” from a different angle. These are all original suggestions from local agencies that make a selection according to the tastes, desires and rhythm of each traveller. For this exclusive report, we have chosen the gastronomy, the heritage and the trendy districts of the city.

To tell us about the history of Istanbul, we were recommended to speak with Hülya, a dynamic Turkish woman, who spent part of her childhood in Paris. We find her in the lobby of our hotel, in the heart of the port district of Karaköy. After a captivating introduction to the history of the city, our guide takes us to the palace of Topkapı which was, from 1465 to 1853, the main residence of the Ottoman sultans. It is a huge estate of some 70 hectares overlooking the Golden Horn, the Bosphorus and the Sea of Marmara and surrounded by five kilometres of ramparts. The opportunity to discover its harem, its sumptuous courtyards, its hammams, its kitchens and its ceremonial rooms. A group of exceptional buildings built over four centuries that allows you to appreciate the life that was led at the time of the Ottoman court.

Hülya then takes us to the Basilica Cistern, a gigantic freshwater tank erected on the initiative of the emperors Constantine and Justinian until 532. Rainwater was captured and collected by means of an ingenious drainage system and then redistributed to the Great Palace and the Baths of Zeuxippe. A veritable underground cathedral that was only rediscovered in the 1950s and was used as a set for the films From Russia with Love and Inferno.

Then on to the sumptuous Basilica of Saint Sophia, a church turned mosque, built between the 4th and 6th centuries. Since 1934, this place of worship has been transformed into a prestigious museum, which is now a must-see attraction in Istanbul. Contrary to the fate of a great majority of Christian buildings that were subjected to intensive looting by Ottoman troops, Hagia Sophia was spared. When it was converted into a mosque, the many Christian mosaics and murals were preserved, making it today a meeting place for the Christian and Muslim faiths. And if President Erdogan now wishes to make Hagia Sophia a mosque instead of a museum, this basilica will always remain a witness to the Christian era present right up to the gates of the Middle East.

After a hearty lunch, Hülya invites us to join the imposing imperial Süleymaniye Mosque, designed for Sultan Suleiman the Magnificent between 1550 and 1557. Its harmonious proportions, its cascading dome and the light that penetrates it make it a remarkable monument. The silhouette of this mosque, with its four tapering minarets, dominates the skyline of the southern bank of the Golden Horn, while its gardens offer a breathtaking view of the nearby Bosphorus. This day rich in discoveries ends in the maze of the Grand Bazaar of Istanbul where gold jewelry, colored blown glass lamps, antique fabrics rub shoulders with souvenirs and other leather goods. This covered maze of 65 alleyways is home to some 4,000 shops, including nearly 1,000 jewelers.

2. Istanbul the glutton one

For this second day spent in Istanbul, it’s time for gastronomy. Straddling two continents, Istanbul offers a cuisine that is a fusion of Western and Eastern dishes. Malik, our guide for the day, suggests that we start our tour with a breakfast of böreks, a variety of salty pastries from Central Asia. The Ottoman Turks then popularized them throughout the Mediterranean basin. Filled with cheese, spinach, minced meat or potatoes, this hearty and inexpensive delicacy is sold in small bakeries or in specialized shops. It can be eaten throughout the day and allows you to treat yourself to a hearty meal at a democratic price.

After a stroll through the Armenian quarter and then to Barbaros Square Parkı, where Barbarossa’s mausoleum is enthroned, Malik takes us to one of the best establishments where we can taste the famous kebab, the emblematic dish of Istanbul. Composed of beef, chicken or lamb, it consists of very thin slices of meat grilled, laid or rolled in a bazlama, a bread both tasty and soft. The meat can be garnished with vegetables, but also with yoghurt or some French fries. A delight to be enjoyed with a local beer such as Efes or Bomonti. The kebab, like grilled fish or fried seafood can be tasted in the popular district of Beşiktaş which concentrates the best restaurants in Istanbul.

In the afternoon, Malik opens the gate to sweet delights with the unavoidable baklavas, a traditional dessert common to the peoples of the ancient Ottoman and Persian empires, which today’s Turks manage to design with the right balance between sugar syrup, pistachio or walnut. This is a far cry from the pastries found in the Maghreb. The baklavas are tasted with a çay (tea in Turkish) or with a coffee which is prepared in the local fashion, i.e. as a decoction. Here, very fine ground coffee and sugar are poured into cold water. The mixture is then put on the fire and when it foams, without boiling, it is removed from the fire and served immediately.

3. Istanbul the trendy one

The third theme of this tour: the trendy districts. Accompanied by Can, a Franco-Turkish boy who arrived in Istanbul at the age of 12, we first discover the district of Yeldeğirmeni. Its name, which means “windmill”, evokes the 17th century, when Sultan Abdulhamit I had four windmills built in the district to supply the inhabitants with flour. Situated on the eastern bank of the city, between the landing stage and the station of Haydarpaşa, one discovers a multitude of riches. If you look up, you can admire the numerous and imposing murals, born in the wake of the protest movements of 2013 and realized with the blessing of the town hall. Numerous wooden houses still have gables on the street, as well as stone façades that bear witness to a glorious past.

In recent years, Yeldeğirmeni has taken on the look of Turkish Berlin, with a thousand and one hipster-looking shops, small cafés with sober, contemporary decor, and record and musical instrument dealers. A young and trendy atmosphere is also to be found just a few steps away, in the Moda district, where you will find large green spaces, bars and restaurants with terraces, all with a breathtaking view of the sea. Another Istanbul, still untouched by the mass of tourists who mainly frequent the European side of the city.

Can invites us to spend the afternoon in the Feriköy district, which we reach by taxi. Here stands the former Bomonti beer factory, founded at the end of the 19th century by two Swiss brothers. Closed in 1991, the factory rose from the ashes almost 30 years later under the name of Bomontiada. The place has been converted into a very dynamic artistic centre where shows, concerts and exhibitions take place, as well as a good meal in one of the restaurants in the centre.

The day ends with a bottle of Öküzgözü, an excellent red wine produced in the province of Elazığ, in the centre of the country. Can has opted for a friendly bar in Nişantaşı, a posh residential area of Istanbul, famous for its fashion boutiques that bring together international brands, local designers and many chic bars and restaurants.

An extraordinary city, a link between two continents, Istanbul is much more European than we think in the West, both in terms of its geographical location and its past. It is the showcase of a modern, dynamic Turkey, open to the world, and home to an urbanized and highly westernized population. The image that it reflects to tourists is far removed from the clichés that sometimes circulate in our countries. But oriental influences are also an integral part of Istanbul’s identity. The colorful side of the city is what makes it so rich and interesting. A European capital like no other, Istanbul succeeds in uniting the diversity of influences to better bring people together.