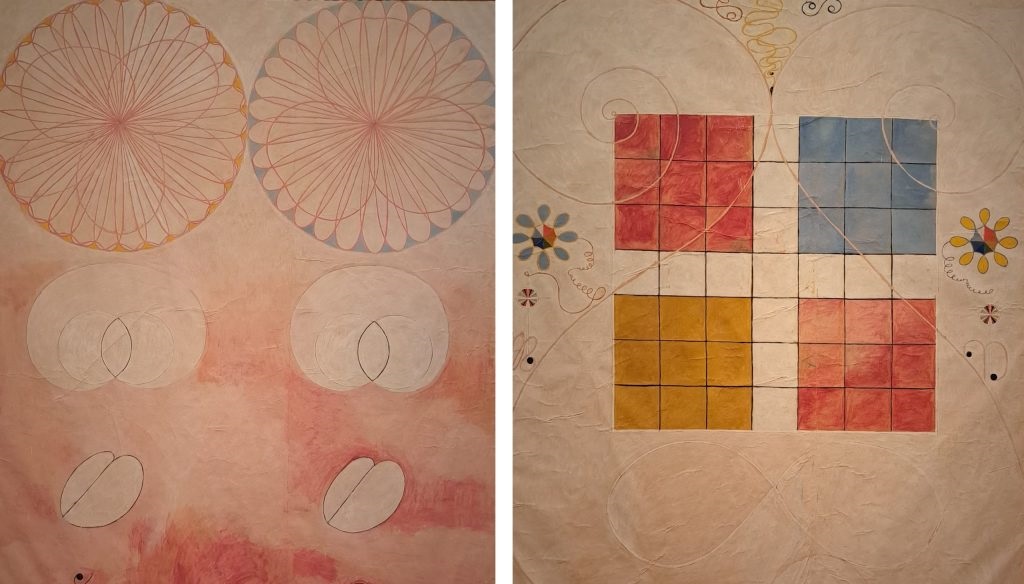 Long overlooked, the abstract art of Hilma af Klint, with its mystical language of forms and colours, is finally getting the attention and recognition it deserves. The Ten Largest, on show at the Moderna Museet in Stockholm, explore the four phases of life: childhood, youth, adulthood and old age. They are presented together with her watercolours that explore the forms and shapes that become her personal language communicating her vision.

Hilma af Klint was a pioneer of abstract art, producing The Ten Largest in 1907. The Russian giant of art, Wassily Kandinsky, painted his first abstract art arguably only around 1910, apparently after being introduced to Hilma af Klint’s work via her friend Rudolf Steiner. This echoes the important “who came first” and “who deserves the praise” questions that plague art (e.g. Gauguin and Bernard) and all disciplines: literature (Orwell’s 1984 and Huxley’s Brave New World were inspired by Yevgeny Zamyatin’s We), science (Tesla and Edison) and maths (Newton and Leibnitz).

It also raises the other critically important question of societal bias against recognising women’s historical contributions. Justice is essential. It is more than about time that men and history give due credit to the creations and influence of inspirational women. Credit where credit is due.

The focus of the rest of this article is on the profound beauty and meaning of Hilma af Klint’s unique and ground-breaking creations. If Hilma af Klint inspired Wassily Kandinsky and other abstract artists, we should appreciate her and her creations even more.

The Ten Largest is an impressive and intriguing set created in 1907. Her work ranges from vibrant – see the use of orange in Childhood 2 and yellows in Adulthood 7 – to a more subdued palette (Old Age 9 and 10). They integrate nature’s forms as symbols: lily, rose and clover patterns in Childhood 1 and 2. The works also make extensive use of geometrical patterns leaning on nature, such as snail shell-like spirals and seed pods, to pure geometric patterns from intersecting circles to those many of us produced as children using spirographs (see Old Age 9).

Childhood 1 and Adult 5 and 6 integrate writing, notably with both visual impact and statements of communication. All use colours to portray meaning beyond the emotional impact of seeing the colours. There is a language in af Klint’s symbolism.

Notes on Letters and Words pertaining to Works by Hilma af Klint gives us a key. Blue represents the “feminine, the powerful, real nature, the faithful”, and yellow “the masculine, the splendid colour of light, the foundations of knowledge.”  The notebooks also go into the spiritual meaning: “The snail or spiral represents development or evolution. The eyelet and the hook, blue and yellow, and the lily and the rose represent femininity and masculinity respectively. W stands for matter, while U stands for spirit. The almond shape arising when two circles overlap is called the vesica piscis and is an ancient symbol for the development towards unity and completion.”  (extracts from an article by Emily Pothast)

Hilma Af Klimt, born in 1862 in Sweden, was a mystic and spiritist who dedicated her life to giving form in her paintings to the invisible reality of the spirit world. She was a follower of the then-contemporary “theosophy” movement (inspired by the Russian Helena Blavatsky), where all souls are sparks of a “Universal Over-Soul” and life is a pilgrimage through the cycle of necessary incarnation, as well as “anthroposophy” (founded by Rudolf Steiner), which postulates the existence of an objective, intellectually comprehensible spiritual world, accessible to human experience. Hilma af Klint claimed direct contact with spirits, notably “The Elders”, and maintained that her work was to share insights from the beyond with us.

While abstract art in many ways, it was not in the sense of art exploring how colour and composition affect viewers, but a message to us in a unique language she created. It was an ode to the spiritual world and our cycles of life and need for self-development. The abstract creates a direct portal to our deeper reality and necessity.

Wassily Kandinsky was similarly inspired by theosophy and anthroposophy and developed his own explorations of the spiritual world, building on his passion for music, itself sometimes seen as a portal to the soul and spiritual world. His books Concerning the Spiritual in Art, 1910 and Point and Line to Plane, 1926  are fascinating.Leaving aside that Hilma af Klimt came first, Kandinsky’s tomes merit being read, just like Hilma af Klint: notes and methods, edited by Christine Burgin in 2018, to help us interpret her work further and understand the language of form and colour.

There are as many meanings as there are viewers. So, while I have to declare some degree of ignorance as to what the artist meant with each painting and each symbol, at first encounter, Childhood 1 and 2 present, with the rich colours, nature’s forms and writing, a statement of joy and potential.   Youth 3 and 4, with the intense orange and again many forms, communicate the energy and intensity of youth.

Adulthood 5 to 8  use a more subdued mauve palette, more writing and spots of black, but also warm yellow – communicating to me the more reflective and emotionally mixed reality of adulthood, yet still full of life and meaning. Finally, old age is yet more subdued, with more geometrical shapes underlining a time of reflection and understanding. Life seeps out of the palette, but there is still consciousness.

This short article is only a “toe in the door” to Hilma af Klint’s work, a first reaction to something that merits far more analysis and appreciation to help with the wider journey offered through this and her wider work. Many artists have talked of being vehicles for messages from beyond. It is worth standing in front of these paintings and imagining The Elders communicating to Hilda af Klimt. What message would these works, which still resonate now, have for us in these difficult times?

The Ten Largest is on show at the Moderna Museet in Stockholm until 8 January 2023. If you want to read more on Hilma af Klint, see Stuart Jeffries’s article in the Guardian, Emily Pothast’s The Visionary Practice of Hilma af Klint, and Marcus Bunyan in Art Blart on the  ‘Hilma af Klint – a pioneer of abstraction’ exhibition held almost a decade ago also at the Moderna Museet.  Go also to the Guggenheim museum notes on its 2019 exhibition, Paintings for the Future, see Zeitgeist Films’ Beyond the Visible – Hilma af Klint, directed by Halina Dyrschka, and, of course, explore the Hilma af Klint Foundation. If you are more patient, then the Tate Modern London, London will host Hilma af Klint & Piet Mondrian, 20 April to 3 September, 2023. History is being rewritten, for the better this time.