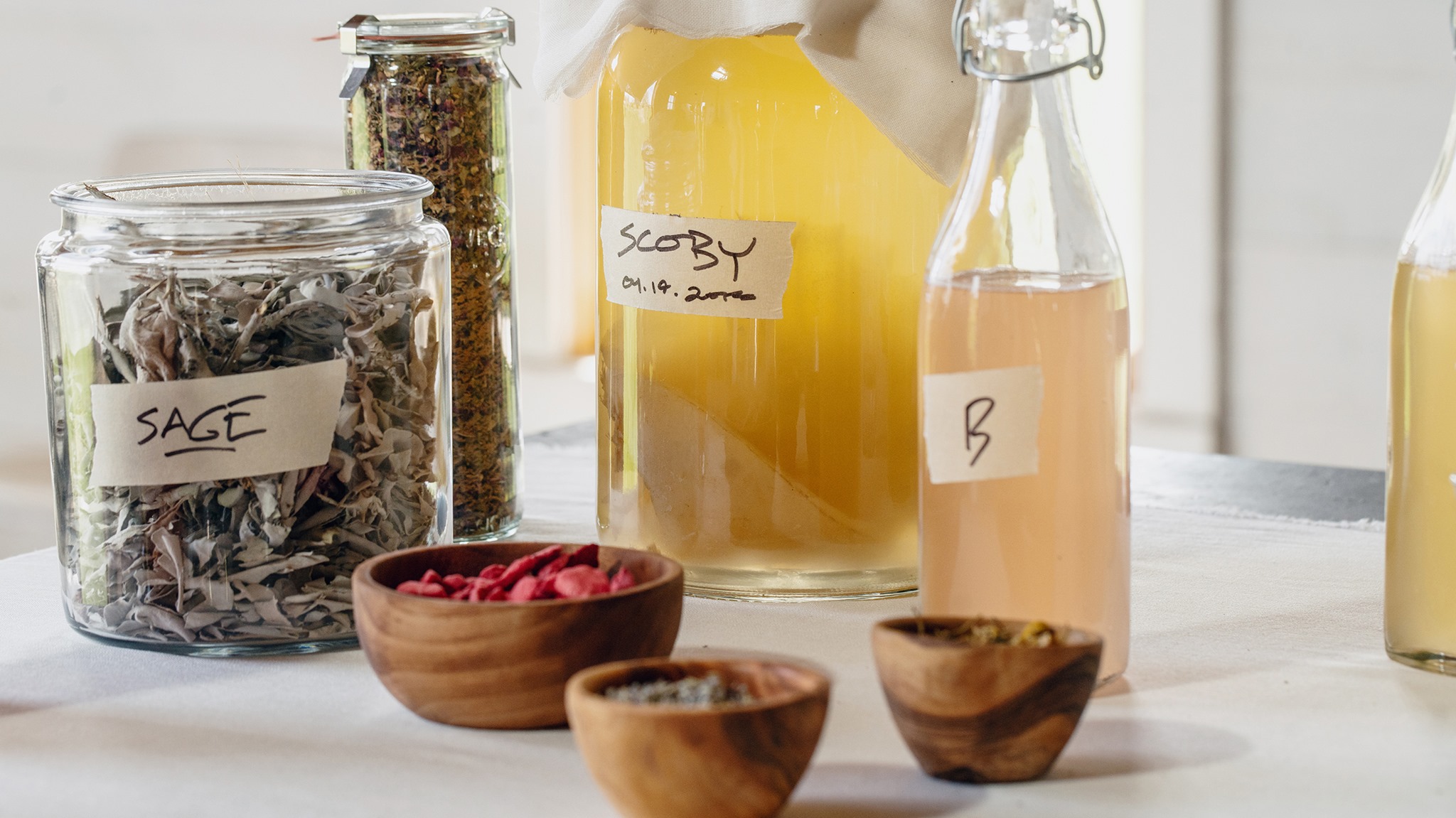 Kombucha is a fermented and sweetened Chinese beverage with a controversial history. Normally made with black or green tea leaves, Kombucha requires a double fermentation process. Firstly, a so-called “scoby” (acronym for “symbiotic culture of bacteria and yeast”) is left to ferment at room temperature in a sweet tea mixture (tea leaves, water, and sugar) for 1-3 weeks. Secondly, the beverage is bottled and left there for 1-2 additional weeks to carbonate. As the bacteria and yeast feed on the sugar, carbon dioxide is released: This is why Kombucha comes out fizzy. Once these two steps are completed, Kombucha is refrigerated to slow down the fermentation and carbonation processes.

The final product contains vitamin C, B6 and B12, thiamin, acetic acid, and lactic acid, as well as small amounts of sugar, since the bacteria eat most of it. The fermentation process also leads to the production of alcohol. The longer the fermentation process, the higher the alcohol content. The drink can be consumed plain or mixed with fruit juices or herbs. Throughout the years, Kombucha has been subject to several controversies related to its alcohol content and its broad and varied health benefits.

So what’s the history behind this ancient controversial beverage?

Kombucha was probably invented around 220 B.C. in Manchuria, a historic region located in Northeast China. Throughout the centuries, this beverage was brought to Europe and the United States. Kombucha’s popularity increased around the 1960s thanks to a Swiss study on its health benefits. In the 1990s, the beverage gained popularity among many western consumers, who started to homebrew Kombucha, associating it with numerous – though not always true – health benefits. However, some studies carried out in 2010 showed that several benefits associated with Kombucha had been overblown by the media. This does not mean that the beverage doesn’t have health benefits at all. Thanks to the fermentation process and to its tea content, the beverage contains probiotics that ease digestion and encourage gut bacteria diversity.

The success of the Kombucha industry is often associated with the company GT’s Kombucha. GT’s Kombucha was founded in 1995 by GT Dave, who began bottling the beverage in his kitchen in Southern California. That same year, Dave sold the first bottles to an LA health food store, becoming the first person to market Kombucha in the United States. From that year on, the company expanded in many US markets, adding different flavors to the products’ portfolio, and enriching the recipe with other super foods.

Through the early 2000s, sales of Kombucha steadily grew thanks to the broad availability of GT’s products. In 2010, the distribution of Kombucha was stopped following a food inspection in US supermarket Whole Foods. During the inspection, some leaking Kombucha bottles were noted. A few of those bottles were submitted to a food science laboratory, where some bottles were found to contain alcohol levels between 0.5% and 2.5%. According to the Alcohol and Tobacco Tax and Trade Bureau’s law, non-alcoholic beverages must contain less than 0.5% of alcohol. After the release of the results, Whole Foods decided to stop the sales of Kombucha as a precaution.

After this scandal, the Alcohol and Tobacco Tax and Trade Bureau decided to regulate any Kombucha products with an alcohol content of 0.5% or more. This is what is stated on the Bureau’s website: “Under federal law, if the alcohol content of kombucha is 0.5% or more alcohol by volume, at any time during production, when bottled, or at any time after bottling, the kombucha is an alcohol beverage and is subject to TTB regulations.”

While some Kombucha producers decided to change their recipes to reduce the content of alcohol under 0.5%, others kept their original formula. This last group rebranded the product under the name “Kombucha beer,” highlighting its alcohol content. Throughout the years, a large number of companies have started to produce Kombucha beer and to market it as a healthier and gluten-free alternative to the traditional beer.