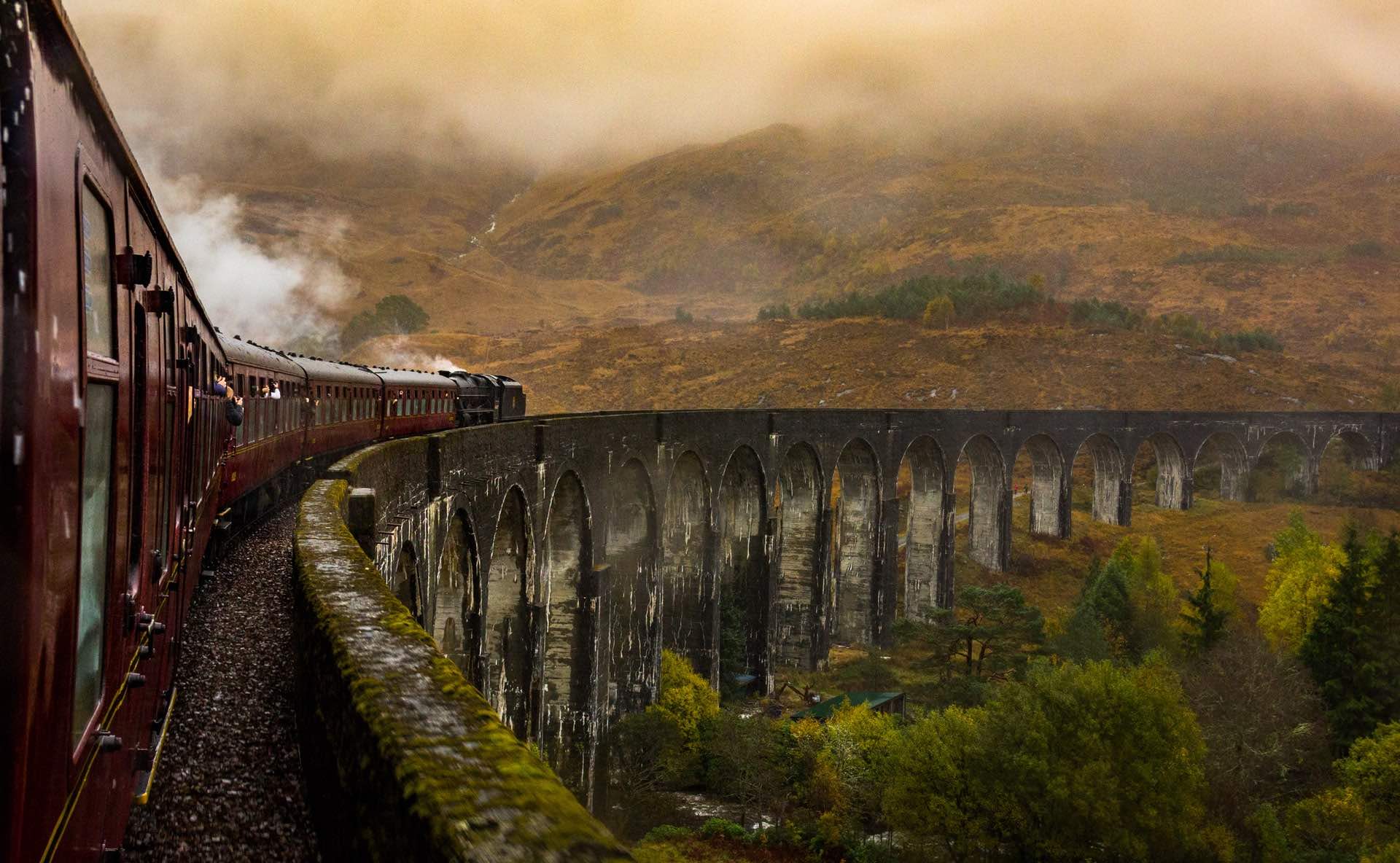 Travelling by train has always made me dream, not only for having multiple destinations at our reach within a few hours, but also for the peace it brings as it lets us look at the landscape from the window, read a book, chat or watch a film.

These are some of the most wonderful journeys around the world that we can do by train, some more serene, some more adventurous, but all absolutely thrilling. It will be hard to choose just one.

1. The Train to the Clouds, Argentina

And we start in the clouds… 4000 meters above sea level, in the Andes, “Tren a las Nubes”, is one of the highest and most iconic railways in the world, running 217 km in a journey of 16 hours.

The journey begins at an altitude of 1187 meters in the city of Salta in Argentina, goes across Vale de Lerma, enters Quebrada del Toro and ends its trip at 4220 meters in the Viaduct of Polvorilla, also crosses 29 bridges, 12 viaducts and 21 tunnels.

The train to the clouds got its name from the many clouds that are frequently seen beneath the slopes of the mountains and even the bridges.

The rail route of the Bernina Express takes you through the incredible Alps, connecting the cities of Tirano and Chur, passing through 55 tunnels and 196 bridges. A particularly unforgettable moment that deserves to be registered is the crossing of the Landwasser Viaduct, world heritage of UNESCO. If you take this trip, you can still see places that will remain in your memory, such as the curve of Montebello with a view to the Bernina Mountain range, the Morteratsch Glacier, the three lakes: Lej Pitschen, Lej Nair and Lake Bianco, Alp Grüm and the Brusio spiral viaduct. During the summer it is possible to continue the journey from Tirano to Lugano with the bus line Bernina Express.

One of the most iconic images of the train “The Jacobite” takes us back to the films of the saga “Harry Potter” and immediately to the Hogwarts Express. The line runs for 134 kilometers and connects Mallaig and Fort William, both towns in the Scottish Highlands.

Here you can marvel at the most beautiful Scottish landscapes.

The train takes us through remote areas of magnificent natural beauty, starting with Ben Nevis, close to the tallest mountain in the Great Britain and passing by Arisaig.

The most important spots are the sea lochs of Nevis and Morar, as well as river Morar and also the deepest saltwater lake in Europe, Loch Nevis, as well as the valleys covered in luxurious green.

For this reason, the train has strategic stops in the most important points: Glenfinnan, Arisaig and Mallaig, the final destination, which includes a break for lunch and for a visit to the local commerce.

This route dates back to 1901, being described as one of the best rail journeys of the world.

The West Rhine Railway departs from the city of Mainz and crosses its emblematic wine region. The rail track follows the west bank of the river Rhein and crosses some tunnels in between the mountains.

You should seat on the left side of the train to not miss any details of this superb scenery. The River Rhine Valley Railway is absolutely a scenic one. Some locations along the route are protected as World Heritage Sites.

The trip ends in Koblenz, where the river Moselle meets the Rhein.

The most magical train that travels through Morocco is the night ONCF. The sunset seen from it is something unique as it departs from Tangier. After running down the Atlantic coast, it travels across the desert dunes, arriving just next to the Jemaa el Fnaa square in Marraquesh early in the morning. Here you can start your day marveling at the snake charmers and be dazzled by the whole range of colors that are present in objects and fabrics, which abound in the region’s traditional markets.

The Belmond Andean Explorer is the first luxury train with sleeping cabins in South America.

It goes from Cusco, capital of the Inca Empire, glazing through the Andean plains, arriving at the white city of Arequipa. During this journey, you can enjoy the spectacular views of the region, especially Lake Titicaca and the Colca Canyon.

This train does one or two-night trips between Cusco and Arequipa, which is located at 2300 meters of altitude.

A luxury train was already in service, the Hiram Bingham, which travels from Cusco to Machu Picchu, but sleeping is not permitted in it.

The Flam Railway has been described as one of the most wonderful train rides in the world and it is one of the main tourist attractions in Norway. The train departs from the end of Aurlandsfjord, a tributary of the Sognefjord, to the highest mountains on which sits the Myrdal station. The trip will show the most remarkable points and a breathtaking landscape of western Norway.

The 20 kilometers of the railway line that descends from Myrdal, at 863 meters of altitude, to the harbour of Flam is incredible, has 20 impressive tunnels, one of them in the shape of a spiral.

Many times, travelling goes beyond appreciating the surrounding beauty, here it is necessary to know the history of a country. Over ninety thousand workers, among them around sixteen thousand war prisoners, died during the construction of this railway between Bangkok and Myanmar, totalling about 415 kilometres of extension. The trip in the Belmond Eastern & Oriental Express, in the only section of the track that one can travel these days, is extremely popular.

The cast iron bridge over the River Kwai and the winding rail trip that lasts two hours are all that remains from Thailand’s Death Railway.

Striking memories of a devastating history that hangs over the tropical Kanchanaburi jungle, considered by local residents as one of the most beautiful areas in the country.

Visit Kanchanaburi during a day, exiting Bangkok. There are ecologic inns and fluctuating cabins in the river that attract those who look into spending the night appreciating the natural reserves that the city has to offer.

The three routes of two-day journeys operated by the Rocky Mountaineer train are relaxing and excellent to enjoy Canada’s incredible landscapes. The coaches offer panoramic views and the onboard experience is unique, just like the food: local and in-season ingredients as well as wines are included in the three-course lunches. The overnight stops include accommodation in hotels.

Delight yourself with British Columbia and Alberta in a trip of the Canadian Rocky Mountains.
These journeys combine wildlife, welcoming communities and the best landscapes in a fabulous and iconic journey.

Recently, Ecuador has transformed its old railways, once again promoting touristic train routes. A total of eight different itineraries, with a much more extended route, that connects the coast with the capital city. Among these options, the most renowned trip is the Nariz del Diablo (Devil’s Nose) train.

Many say that the Nariz del Diablo train in Ecuador owes its name from a mountain in the shape of a somewhat scary nose, and also to the fact that it is one of the most dangerous tracks in the world, because it comes down to five hundred meters of altitude in very little time. Besides that, at the moment of its construction, during the mid-nineteenth century, it was necessary to blast giant blocks of mountain rocks that surround the trails, and unfortunately, many men died during this period, which also justifies its name.

“Nariz del Diablo” is just one part of the route between Guayaquil and Quito, and consists of a steep mountain climb.

The train zigzags through a region of magnificent landscapes in the Andes. The train departs from the little town of Alausi and ends its trip in the little village of Sibambe, from where you can have a great view of the iconic mountain.

The train travels at a low speed, allowing passengers to enjoy the landscape.
These days it is no longer allowed to climb to the roof of the coaches, although, one of them still has an observation deck.

Do venture into these incredible journeys!