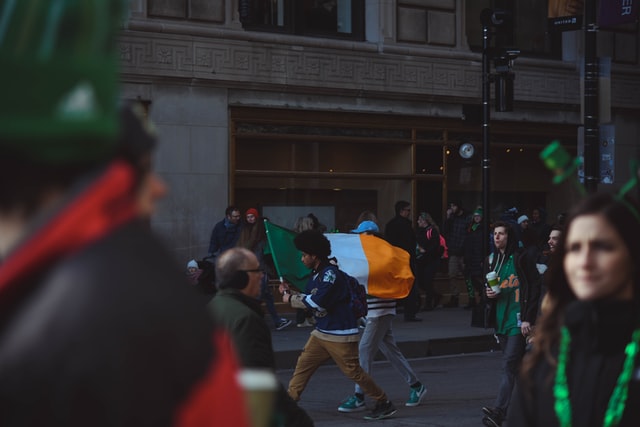 France removes all Covid-19 measures for US travelers

Saint Patrick, considered the patron saint of Ireland, was born in Banna Venta Berniae, a town in Roman Britain, sometime in the late 300s AD. His birth name was Maewyn Succat but he chose to be known as Patrick in the future. He had many nicknames throughout his life: many knew him as Magonus, others as Succetus, and some as Cothirthiacus.

His father, Calpurnius, was a deacon in the early Christian church, but Patrick was not much of a believer. It wasn’t until he was captured by Irish pirates at the age of 16 and enslaved for six years as a shepherd that he decided to convert to Christianity. While in the northeast of Ireland, Patrick learned the Irish language and culture before attempting to escape back to Britain but was captured by the French. He was interned in France, where he learned all about monasticism before being released and sent home to Britain, where he continued to study Christianity well into his 20s.

Patrick claimed that he had a vision that told him to bring Christianity to the Irish people, who at the time were predominantly pagan and Druidic. His teachings, however, were not welcome, so he had to go to other offshore islands. There he began to gain a following and eventually moved to the mainland to spread Christian ideologies in Ireland for many years. During this time, Patrick baptized thousands of people (some say 100,000), ordained new priests, led women to become nuns, converted the sons of kings in the region and helped in the formation of over 300 churches.

St. Patrick’s Day began as a religious celebration in the 17th century to commemorate the life of St. Patrick and the arrival of Christianity in Ireland. This “Feast Day” always took place on the anniversary of Patrick’s death, which was believed to be March 17, 461 AD. In the early 18th century, Irish immigrants brought the tradition to the American colonies, and it was there that St. Patrick’s Day began to become the symbol of Irish heritage and culture that it is today.

As more Irish people crossed the Atlantic, the celebration of the holiday slowly grew in popularity. So much so, in fact, that the first St. Patrick’s Day parade was held in Boston in 1737. In 1903, Feast Day became a national holiday in Ireland and, over time, morphed into what is now called St. Patrick’s Day around the world. Since then, the holiday has been celebrated around the world in countries such as the United States, Great Britain, Canada, Argentina, Australia, New Zealand, Switzerland, Russia and even throughout Asia.

Here are the top 5 most popular traditions to celebrate St. Patrick’s Day.

1. The color green and top hats

In the same sense that Patrick took up the shamrock as an example of the Holy Trinity, over the years, Christian and Catholic elements merged with pagan and Celtic elements (such as the Triquet, luck and the existence of elves) to represent the festivity.

Patrick, as a person, used to dress in light blue and characterized his order with the same color, according to the information that has been obtained from his life, however, because this tonality contrasted too much with the construction of the story, the Saint was attributed the use of green which was more significant because of the blessed plant he had used and as a tribute to “the Emerald Isle” as Ireland is known until now.

Top hats and four-leaf clovers became part of the celebration after 1970, when Irish mythology and its legends were further away from ecclesiastical tutelage and prohibition than before. The leprechauns, their reddish hair and beard coming from the Germanic peoples, their luck, top hats, the fortune that awaited them on the other side of the rainbow and the long pilgrimage they had to make to reach it once they were captured had points in common with the story of the Irish who left their country to flee famine and misery by crossing the ocean to America.

According to History.com, thousands of Irish Americans gather each year with their loved ones on St. Patrick’s Day to share a “traditional” meal of corned beef and cabbage. Though cabbage has long been an Irish food, corned beef only began to be associated with St. Patrick’s Day at the turn of the 20th century.

Irish immigrants living on New York City’s Lower East Side substituted corned beef for their traditional dish of Irish bacon to save money. They learned about the cheaper alternative from their Jewish neighbors.

Until the 1970s and 1980s, the authorities were inflexible to the idea of allowing pubs and bars to work on the day the Saint was celebrated; however, since then, March 17 has become one of the most emblematic drunkenness celebrations worldwide, bringing together cultural elements, emotions and fun.

While a good advertising strategy that saw in the celebration the perfect pretext to increase sales during those years, the load of symbolism, magic and traditions surrounding Celtic traditions and the figure of St. Patrick ended up adding the perfect ingredient for this day.

If at this point we take a look at the folkloric elements of the Irish, we find their much coveted luck a fundamental part of their history. This, being even older than the myth of St. Patrick, we have already seen it starring in tales such as that of the capture of leprechauns who in exchange for their freedom had to surrender all their riches to their captor and in the story of the Blarney Stone; a magical rock that filled whoever kissed it with bliss.

As expected, romance was also an attractive element to add to the “St. Patricks Day”, so on this date it is common to see people giving kisses of fortune brought from the region of Cork, where the rock rests, because according to tradition, those who want to receive blessings in their lives, but do not have the possibility of traveling to Ireland should only “kiss an Irishman” to try their luck.

History.com mentions that during his mission in Ireland, St. Patrick once stood on a hilltop (which is now called Croagh Patrick), and with only a wooden staff by his side, banished all the snakes from Ireland.

In fact, the island nation was never home to any snakes. The “banishing of the snakes” was really a metaphor for the eradication of pagan ideology from Ireland and the triumph of Christianity. Within 200 years of Patrick’s arrival, Ireland was completely Christianized.