Restored 1908 film shows Brussels as you’ve never seen it before.

Sang Hoon Degeimbre: the chef who brings Korea and Belgium together 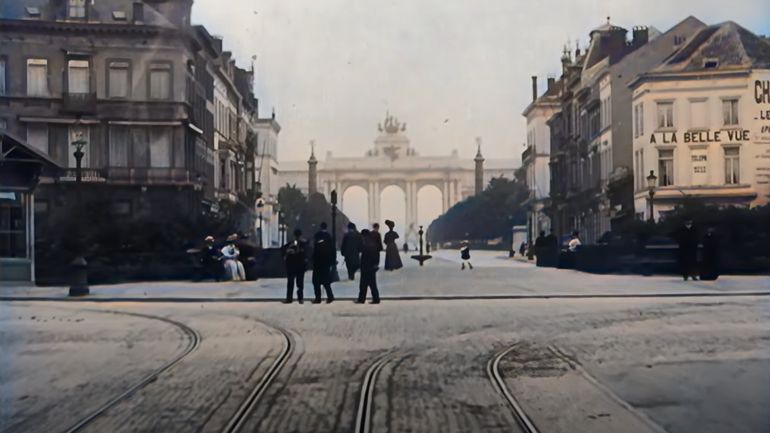 A Dutch Youtuber has restored and colorised a unique eight minute piece of footage filmed over a century ago in 1908, which shows the city of Brussels as it was under the reign of Leopold II, one year before his death. The film reveals familiar sights such as Place Rogier with the old Gare du Nord, Cinquantenaire Park and its arcades, the Royal Park, the Cathedral of Saints Michel and Gudule, the woods in Terveuren reached by the 44 tram which still exists today, and many more.

1. A glimpse of a bygone era

The Youtuber’s channel “Rick88888888” specialises in distributing video archives which have entered the public domain, using technology to enhance them. This particular film has been motion-stabilised, speed corrected, enhanced and colorised using Artificial Intelligence software. The original footage came from the Prelinger Archive collection, which provides free access to period material, and as part of the restoration music by contemporary Swedish composer Hampus Naeselius has also been added. The original video has been online since 2013 when it was uploaded by British Youtuber Cinematek and credited to a British production company, however this version was silent and in black and white.

The footage is a glimpse into an era from long ago, a lifestyle that those alive today cannot relate to, and dramatically different to the Brussels we know and love today. It was the Belle Epoque era, the time of Brussels’ renowned Art Nouveau, and the camera captures the people of the capital in the fashions of that time. Men in smart suits, top hats, boater or bowlers on their heads and cane in their hands, women wearing long skirts and feathered hats.

2. All the sights of Brussels

The film begins with the camera scanning the Place Rogier, in front of the old Gare du Nord, demolished in the 1960s to make way for the Rogier Tower. We then glimpse Boulevard Anspach bustling with coaches, horse-drawn carts, bicycles and pedestrians, even the city’s early tram network. No cars, of course.

Viewers can see how the Place de la Bourse has changed little, whilst the rue de la Loi up towards the now Robert Schuman roundabout, looks rather different than the centre of European institutions we see today. The arcades of Cinquantenaire Park are distinguishable in three parts rather than the single arch as was the case between 1875 and 1905.

Back in centre of the city the camera captures rue Royale and the Royal Park as Brussels residents of the time wander around by the Stock Exchange, the Cathedral of Saints Michel and Gudule as it was before the opening of the North-Midi junction and the demolition of an entire district, and the Grand Place with its merry-go-round and ice cream parlour.

An aged view of Place de Brouckère shows various impressive buildings, such as the former Hotel Continental, and the camera moves to show the Sonian Forest, journeying by tram along the Avenue de Tervuren and arriving at the gardens of the Museum of Central Africa, which had just been completed at the time.

The incredible footage ends with a panoramic view of Brussels, from west to east, seemingly filmed from the heights of avenue Albert in Forest. Viewers can see several landmarks in the distance; the Porte de Hal, the Palais de Justice, the Notre-Dame de la Chapelle church and the town hall of Saint-Gilles, whilst in the foreground is an advertisement for a furniture store on Boulevard Anspach, the beginning of Rue Eugène Verheggen, Avenue Ducpétieaux and Saint-Gilles prison. The eight minute video take us on a journey through time, sparking our imagination an encouraging us to wonder at all that has changed since.