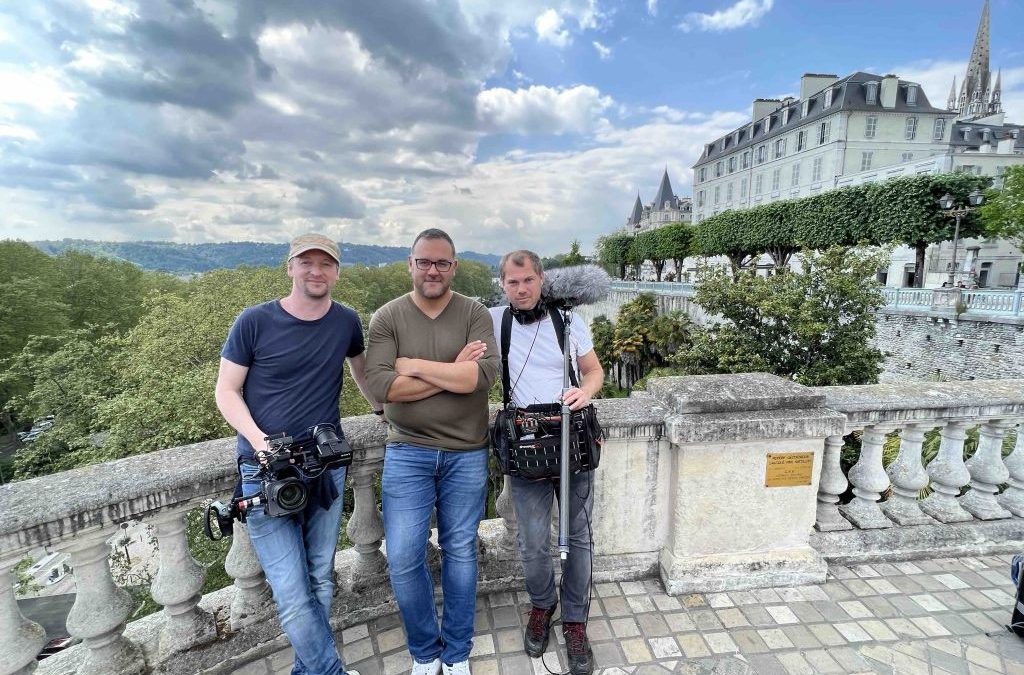 On Saturday, June 25th, TV5 Monde premiered a new episode of the Embarquement TV series showcasing the historical beauty and cultural richness of the city of Pau, France.

Capital of the Béarn, in the Aquitaine region, Pau is an old royal city beautifully set between the mountains and the ocean, at the extreme southwest tip of France. It is heir to a rich tradition of tourism dating back to the 19th century, when it was a resort for aristocrats from around the world.

The documentary invites you to embark on a journey to discover the Castle of Pau, the lush green spaces all around, the advances in sustainable mobility the city has been investing in, the Grand Prix de Pau, and more.

The Château de Pau (Castle of Pau), erected on a rocky outcrop overlooking the Gave river, is the emblematic monument of this city. The evolution of the castle and the Pau’s are closely linked. A feudal castle, over the centuries it has become a royal, imperial and national palace. Currently a museum, it offers its visitors a real dive into local and national history.

In the 16th century, the geopolitical and geo-strategic importance of Pau changed when it saw the birth of its prodigy son: Henry IV, known as “le vert galant” (a man of old age who had a lot of mistresses). Legend has it that Henry IV received a turtle shell as a cradle, a symbol of strength and longevity, still on display at the Château de Pau. The architecture of this castle-monument has a long history of more than a thousand years.

Henry IV was born in the castle on December 13, 1553. He was the last lord to have lived in the castle at the end of the 16th century. It is this King of Navarre, Prince of Béarn, who will finally ascend the throne of France and manage to restore peace by protecting the Protestants, despite being King of France, a Catholic.

On site, there’s also the flamboyant 14th century of Gaston Fébus, the great Pyrenean Prince, and his brick tower and brick keep of 33 meters high. The Renaissance later arrives along with the grandparents of Henry IV, Jean d’Albret and Marguerite d’Angoulême, who helped make this castle-fortress a Renaissance palace.

In the 20th century, Pau became a real holiday destination for winter visitors from the United Kingdom who came to “breathe in the air of Pau”. Their worldly way of life changed the face of the city: the grand hotels, the mansions, the funicular and the two-kilometer-long Boulevard des Pyrénées are all creations which, even today, contribute to the reputation of this city of international spirit.

Pau is also the perfect destination for nature lovers with more than 750 hectares of green spaces, not to mention its carefully maintained private gardens that are perfectly integrated into the urban fabric, such as the garden of the Tour des Géants (Tour of Giants), which pays homage to the Tour of France.

The Tour of Giants was an idea of ​​François Bayrou who wanted to further anchor the city of Pau precisely for the tour de France. Each totem is the story and everyone has their own, with strong events of the stage which are told by our writer Christian Laborde.

Formerly, in the year 1347, Gaston Fébus proclaimed the independence of Béarn and then made Pau a future-oriented capital. Today, proud of its past, Pau is preparing for the future with ambition by having decided to achieve carbon neutrality by 2040. A path that, to a great extent, demands a change in the field of mobility.

The city has built the world’s first high level service bus network powered by hydrogen. The new buses work with so called “green hydrogen”, which is made from water and electricity, a process called electrolysis. Breaking the water molecule produces hydrogen and releases oxygen into the air. The hydrogen is taken on board the bus, where a fuel cell transforms it by combining it with the oxygen in the atmosphere, combines it into electricity, and releases water, so we are on a circle of zero emissions, zero pollutants. The city has won the two most important world prizes for this kind of valuable resource.

Every year since 1899, the city of Pau has welcomed hundreds of thousands of visitors for a major event: the Grand Prix de Pau. The capital of Béarn is one of the few places in the world to see racing cars driving right in the city centre.

There’s been a race called the Grand Prix de Pau since 1830, which was on the horses’ racecourse, and it was then taken over by the cars to say “Grand Prix”. This is where the “Grand Prix” comes from. Later, in 1930, the first renewal competition happened, not on Pau’s circuit, but on another one on the side of Tarbes, on a road going up. The Grand Prix has been on the current site since 1934.

The Grand Prix de Pau is the only Grand Prix taking place in the centre of a city in France, for more than 100 years. Just as Monaco does. The greatest drivers in the world have come to Pau to race and win before entering and becoming the figureheads of Formula 1. In Pau they have won their first victories. It is part of the city’s historical and tourist heritage.

The Grand Prix organizers wish to make the competition as clean as possible at the moment. With electricity, with combustion, with new fuels. They want to showcase new technologies, since that’s what this competition is also for.

According to the organizers, low carbon liquid fuels are fuels that are not impacting climate. They are neutral in carbon, but at the same can be used in existing cars and in existing infrastructure. They can be a good complement of the electric vehicles that may take some time to develop, some time to renew the fleet. It is possible to use the new fuels from today. In the case of internal combustion engines or heat engines, they may be complementary to the electric motor.

After the horses under the bonnet, let’s go back to the origins of the expression “Grand Prix”. In Pau, the horse is a passion that dates back to the 19th century with the creation of the national stud farm and a renowned racecourse, the Pont-long, as well as the second training centre in France, located close-by, in the domain of Sers.

On the domain of Sers, there are about twenty trainers and approximately 600 horses per year, which makes the Domaine de Sers the second largest training centre in France after Chantilly. A large number of horses come during the time of the event which takes place in December, January and February. There are around 150 to 200 horses who travel and come to use the facilities for about two or three months.

The main task to get the racehorses in good physical condition, through different types of exercise (walking, trotting and cantering), with varying degrees of support, to help them get stronger physically and mentally, so that they can perform their best in the afternoon races.

Between the sun and the fog of the Pyrenees, the Jurançon vineyard sings a hymn to the history of the Béarnaise region. This wine of the King, which is also the king of wines, made history at the baptism of Henri IV, when the lips of the future king were moistened with a few drops of the cru.

At an altitude of 400 meters above sea level and 35 kilometers from the foot of the Pyrenees, the vineyards have a very particular climatic and geological conditions there. Located south of Pau, they can be reached by car in ten minutes.

Jurançon is a very old name, and a small place with only a little over 1,000 hectares of vines. There are varieties of grapes which are indigenous and particularly well suited to produce high quality wine. One can find Gros Manseng, Petit Manseng, Courbu, Camarelet and Lauzet, 5 completely endemic grape varieties, which can only be found in these Pyrenean foothills.

Even if a third of the overall production of the Jurançon is devoted to dry wines, the one that remains the best known is the moelleux (sweet wine).

The Jurançon wine is sweet, but not too much. At this altitude it gets colder at night, which allows the grapes to ripen slowly. Because the weather is nice during the day and colder at night, grapes will retain this freshness, this slight acidity and this slightly tart side.

It is said that in the fridge of any good Béarnais there is a bottle of Jurançon waiting for the arrival of friends. The “saibé du cop” is the greeting here. People in Pau say hello and come for a drink. It’s automatic, it is the history of the region.