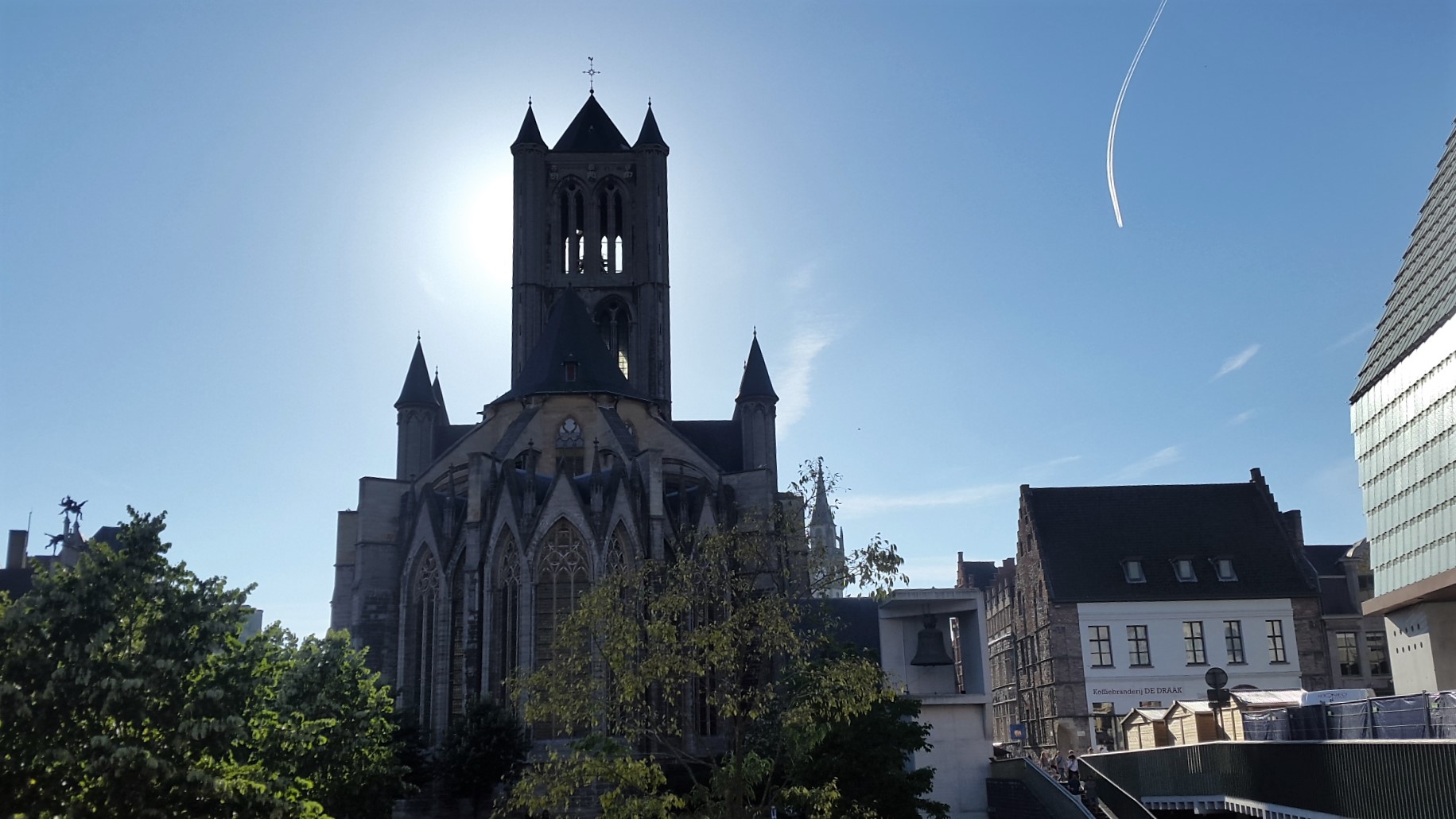 Ghent: A trip to the beautiful Flemish city

With the rain pattering on the windows in early October, I think back to a trip I made to Ghent back in 2017. What do I recall from it?

The train approaches St. Pieters station as if in slow motion, the long line of cars like tired nomads finally coming home. Behind the tinted window silenced images of empty tracks and grafittied walls appear, trains of different kinds, some older than others, then the train comes to a halt, the sound of the brakes almost a moan of exertion, the sigh of a pensioned mountaineer reaching the summit. I grab my bag and stand up; behind an old couple I shamble off toward the door. On the platform people stand with rucksacks slung over their shoulders, wearing sunglasses and colorful t-shirts, kids in Bermuda shorts lick melting ice creams, their hair gelled and shiny.

It feels like being in Madrid, maybe Naples, or rather like Stockholm or Helsinki in high summer; the temperature is about 26 degrees, no humidity, a soft breeze stroking the tops of the trees. Outside the station I catch tram number 1 toward the center and through the window I see people carrying shopping bags, groups of women dressed like nurses or aerobics instructors, men wearing super-hero or gangster outfits, all accompanying the man or woman who, on their last night out before getting married, spent an evening with close friends to bid farewell to a part of their lives, to welcome a new one.

At Duivelsteen I get off the tram and walk in the direction of the Belfort. A fountain is jetting water in the sunlight, its splashing sounds a soothing moment of peace; a few pigeons saunter around, turning their heads to one side, and then to the other, their red eyes observant, wary of the passersby, maybe more so of kids and dogs. Near the Belfort I see people lying on the grass, eating pieces of cheese and Doritos, drinking rosé wine and beer. Behind them, St. Nicholas Church rises against the clear sky, a plane flying high above, leaving white traces behind, a fine thread of cotton sewn on deep, icy blue.

Then I reach the canal, my first encounter with the silky surface that reflects the white bodies of boats, the yellowish warmth of old building facades at an angle. People are gathered on the terraces of restaurants, leaning against the railing or seated on plastic chairs facing the sun, their heads tipped back in delight.

After leaving my bag at the hotel I meet a friend for a drink; she’s kindly accepted my request to see a glimpse of the city through her eyes. At Romain Deconinck plein, a square named after the Belgian theater director, we sit down to have a drink. I ask the waiter for advice, then order a glass of Keiser Karel blond beer, which leaves somewhat of a bitter aftertaste, but in the warmth of the evening and the pleasant conversation it becomes less and less noticeable. Groups of young people, university students most likely, stop by and greet friends, others cycle past, one after the other, their hands not once touching the handlebars.

The next morning I wake up filled with excitement. Along the Ajuinlei, one of the banks of the canal, stalls with second hand books in several languages can be found. At the corner of Onderbergen and Jonkvrouw Mattestraat I pick up a coffee, then walk to the canal. There are books in Dutch, French and English, a few in Italian and German. Among the several ones that catch my attention, I find an old book in French that makes me think of Brussels; a different way to discover the city and its secrets.

The Kouter is a square where the flower market takes place on Sundays. In the middle of the square stands a beautiful 19th century cast-iron kiosk where a band plays classical music. After a handful of pieces they stop, begin to pack up their instruments. “It’s too hot,” a lady from one of the flower stands explains to me. “They are going home early today.”

Before I know it’s noon and the sun is intense; the heat starts to be overbearing. I’ve agreed to meet my friend in the late afternoon for a drink at S.M.A.K, the Municipal Museum of Contemporary Art. On my way there, I walk by the old Palace of Justice and see a plaque describing the life of Peter of Ghent, the Franciscan monk who traveled to Mexico in the XVI century to indoctrinate the indigenous people. He learned Nahuatl and later became known for having set up the first European school in Latin America.

Then I stop to take a look at St. Peter’s Church, the adjacent abbey that has now become a museum and exhibition center. The abbey has a large courtyard with a high gate at the back; some trees can be seen beyond the archway. I walk on the cobblestones with a hand on my brow, shielding my eyes from the sunlight, gazing at the imposing construction around me; later I find out that five Counts of Flanders are buried here. I cross the gate and find a garden, the terrain slightly sloped, vineyards growing at the far end of the yard. Some people are eating sandwiches, others lie on their bellies and read; a few nap under the shade of the trees.

At the S.M.A.K. museum I sit in the backyard with my friend and drink a coffee, a large bottle of water, too. No sound of cars or trams or buses can be heard. Only the rustle of leaves, the warm colors of the late afternoon already setting in.