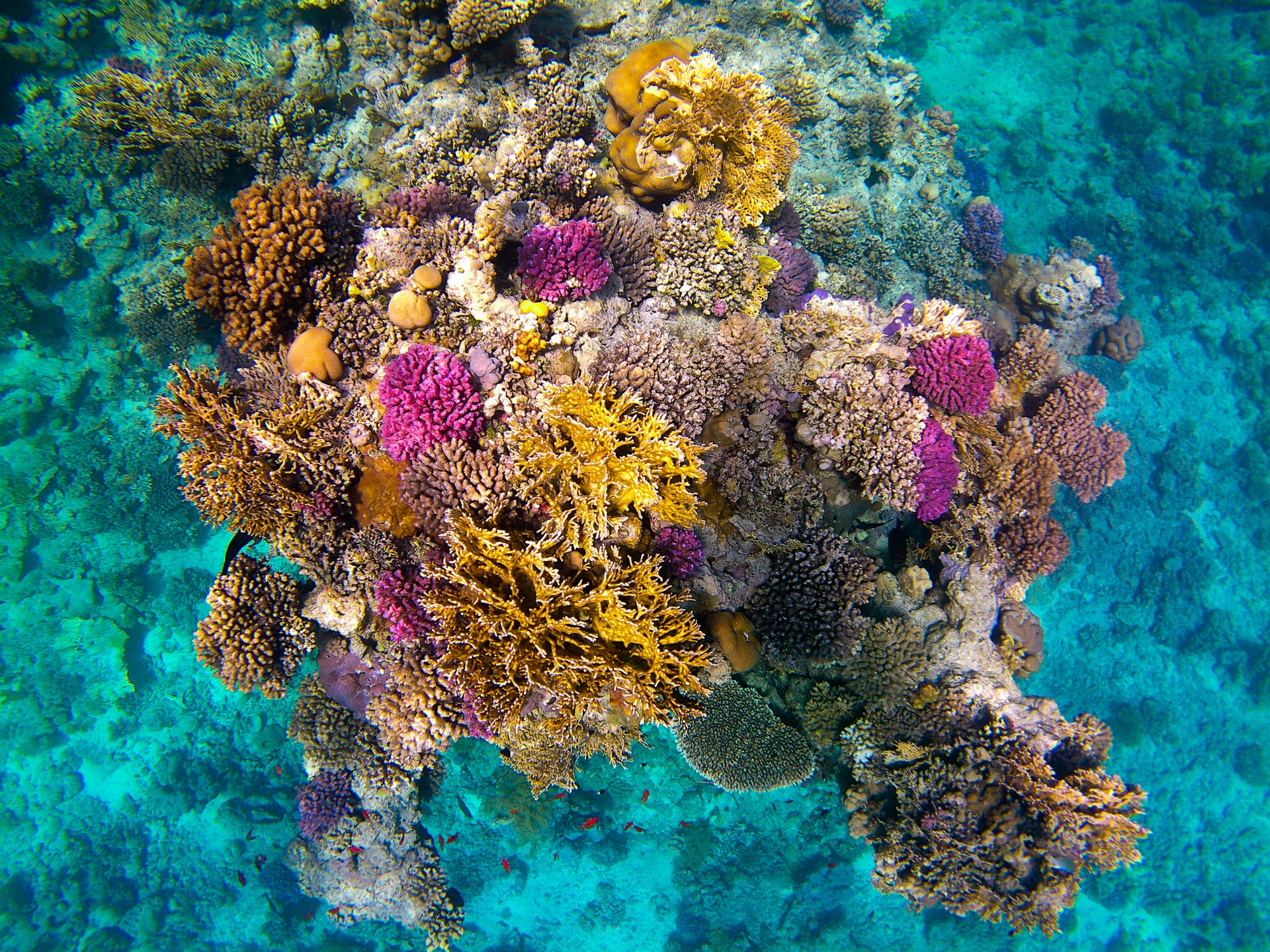 The waters of the Red Sea just off the Egyptian coast are home to some of the most productive and diverse coral reefs in the world, and they attract millions of snorkelers, divers, and other visitors to its coastal resorts. However its popularity with tourists contributes significantly to plastic pollution, and this is threatening the region’s marine life.

Tourism in the Red Sea region is particularly strong as, in addition to year-round sunshine, the area offers tourists a free ‘Sinai Stamp’, enabling tourists to bypass a tourist visa. Consequently, the tourism industry is one of the Egypt’s leading economic sectors and in 2018 generated around 389 billion Eqyptian pounds (20.9 billion Euros).

Pick any spot off the promenade in Dahab and you’ll find something captivating to see. The colorful corals and vibrant fish native to the region are truly a sight to behold. Have you snorkeled in Dahab before? #SameGreatFeelings #ExperienceEgypt #SafeTravels

Each year, as many as thirteen million metric tons of plastic are dumped into oceans around the world, according to research from Pew Charitable Trusts. When plastic ends up in the sea, it threatens fish, seabirds, sea turtles, and marine mammals, which can become entangled in or ingest the plastic debris and suffocate, starve, or drown.

On top of this, plastic rubbish also damages coral reefs as the material can colonise and spread bacteria that causes white band disease, which destroys coral tissue. Plastic debris also creates the perfect conditions on coral for another lethal infection called black band disease. In the Red Sea, plastic pollution threatens more than a thousand species of colourful fish and coral. About ten per cent of these are endemic to the Red Sea, which means they are not found anywhere else in the world, making their damage and loss that much worse.

In an effort to better protect marine life and preserve the country’s one-of-a-kind resort destinations, such as Hurghada and Sharm el-Sheikh, there has recently been a move toward zero plastic tourism in Egypt’s Red Sea region.

Egyptian conservationists launched a campaign to ban single-use plastics in the region last year, with the hopes of protecting the diverse marine life and preserving unique snorkel and dive sites for future generations. Soha El-Ramly, marketing director of Hurghada Environmental Protection and Conservation Association (HEPCA) said, ‘We conducted a study and confirmed that plastic is affecting marine life’.

How Are Humans Consuming Micro-plastics? One of the many ways humans consume micro-plastics is through Contaminated Seafood, Plastic pollution is rampant in oceans, seas, and water bodies. Through the natural environment, these plastics get broken down into smaller pieces. Eventually, they become micro-plastics. These plastic particles in the marine environment are eaten by plankton, which are then eaten by fish. The plastic particles continue to work their way up the food chain until they reach our dinner plates. Mussels are reported to be particularly susceptible to micro-plastic contamination. However, plastics can also be potentially found in almost any other animal that lives in the sea, or any other body of water for that matter. #SayNoToPlastic #HEPCA

The team then transformed their research into a proposal for a ban on the production and use of single-use plastics in the Red Sea Governorate in spring 2019. Following this, governor General Ahmed Abdullah made the proposal law in April and it came into effect the following June.

El-Ramly explained how although governor Abdullah’s support for the HEPCA’s proposal meant the legal aspect of the plastic ban was relatively simple, implementing it has proven to be more difficult. ‘People resisted it’ she says, ‘[they] were used to using plastic…in shops and at home’. Bringing change has been difficult because disposable plastic items like bottles, cutlery, food containers and coffee cups are valued for their convenience in Egypt, and many seaside snacks and even juices are regularly served in small plastic bags.

Following the ban, HEPCA launched a public awareness campaign to educate the public about the harmful effects of plastic pollution on both marine life and human health, to encourage people to change their habits and enable a move toward more sustainable alternatives. The campaign targeted restaurants, hotels, resorts, and other tourist hotspots. They also initiated a scheme to certify businesses that eliminate single-use plastics, which began last summer, and The Siva Grand Beach Hotel in Hurghada was the first to be granted this certification for its commitment to zero plastic tourism.

Although several resorts are starting to embrace the principles of sustainable tourism in the region, supermarkets and restaurants have been a major obstacle to the implementation of the single-use ban because of their reliance on plastic bags, which both shopkeepers and consumers have been hesitant to phase out. El-Ramly explains that, ‘Plastic bags are cheap for shops’, and that despite HEPCA’s campaign, ‘it was difficult to convince them to switch’. In fact Egyptians currently use roughly 12 billions of unrecyclable plastic bags each year.

Top 5 Alternative to Plastic Shopping Bags Paper Bags: If we compare single-use plastic shopping bags with paper bags it reveals that paper bags are 100% biodegradable, recyclable, and reusable. Canvas Bags: Canvas bags are actually made of cotton which is more durable and comes in the variety of sizes and shapes. To add one more specialty the canvas bags can be washed regularly and reused as many times as you want. Cotton Bags: Cotton bags are way more beneficial for the environment due to their reusability and biodegradability.. Although the cotton farming is costly due to the huge water requirement, pesticides, and chemical fertilizer but it makes up a good alternative to plastic bag. Jute Bags: Jute bags are a good old alternative to plastic bags. Jute or hessian bags have high strength and long life as compared to other bags. Like cotton, jute is also natural renewable source which is biodegradable and compostable. Jute plants also cleanse the air by consuming the greenhouse CO2. These inexpensive bags can degrade biologically in two years which doesn’t causes any harm to environment. Basket bags: Basket Bags might look rustic but that’s the reason they are still around. These are few things which can be carried in basket bag like eggs, flowers and Juice bottles. #SayNoToPlastic #HEPCA #RedSea

More than a year later, there has been great progress in that many businesses and consumers have now given up single-use plastics, however there are still those who fail to comply with the ban. These are subject to fines, but El-Ramly says that when HEPCA staff hear about violations, they prefer to take a more community-oriented approach to enforcement. ‘Whenever we find someone not complying, we talk to them’ El-Ramly says, ‘and we will not stop until we get the results we want’.

Owing to the work of HEPCA and other conservationists, the Red Sea Governorate is now leading the way towards sustainable, zero plastic tourism in Egypt. Several cities in South Sinai, including Sharm El-Sheik and Dahab, home to the notorious Blue Hole dive site, have also followed suit.

According to El-Ramly, the ban is a step in the right direction, but the conservation work never stops, and she hopes the single-use plastic ban will be implemented across the whole country one day. Although this is unlikely, it would certainly go a long way towards protecting the Red Sea and Egypt’s other incredible natural wonders, such as Mount Catherine, the nation’s tallest peak, and Siwa’s salt lakes, in Egypt’s western desert.