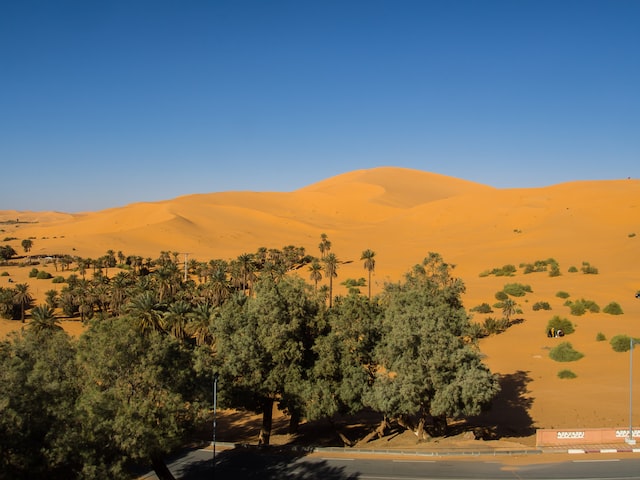 China has barely 12% arable land despite its vast area in square kilometers. For many years, scientists in the country have tried to find ways increase the size of this surface. In 2016, a team of scientists from Chongqing Jiaotong University claimed to have developed – after more than a decade of research – a new technology that could do just this: turn arid, dry desert land into arable land.

At the time, the researchers conducted their first experiment in China’s Ulan Buh desert, one of the most severely dry areas and one of the most difficult deserts to control in China, successfully turning sand into arable soil with functions similar to traditional farmland.

Scientists discovered that soil is in a rheological state when it is hydrated and in a solid state when it is dry, hence the two mechanical states can constantly alternate with each other. Rheology is the science dealing with the deformation and flow of matter.

If the soil’s self-healing properties are lost, two extreme forms of degradation can occur: soil compaction and soil desertification. Taking advantage of this knowledge, the prerequisite for this soil transformation was mechanical manipulation (changing the mechanical properties of the sand, allowing it to become rheological when wet and solid when dry).

Soil is a particulate material, it can convert between solid and rheological state and preserve water, nutrients and air.

The initial field test of cultivation in this desert (which consisted of planting 260 hectares with the hydrogel) resulted in plantations of peppers, watermelons, melons, corn, rice, radishes or potatoes, with a not meager production. According to the Chinese researchers, the plants grown in the sandy plot produced higher crop yields, using the same amount of water needed to grow crops in traditional soils.

In 2018, the test of transforming arid desert land into arable land was carried out in the desert of Inner Mongolia, Taklimakan desert in Xinjiang and desertified land in Zoige, Sichuan, with a total area of more than 650 hectares. In 2019 they again expanded the technology in the Sahara and Middle East deserts, desertified land in Tibet and beach sand in Xisha and Xiamen Islands, with an area of more than 1,300 hectares. All with identical results.

The technology is based on a paste made from plant cellulose, which can greatly improve the ability of desert sands to retain water, minerals, air, microbes and nutrients essential for plant growth.

What could be the impact of transforming desert and grasslands into arable land? It would clearly have large-scale repercussions on the Earth’s climate, biodiversity and overall ecological balance. Some experts have already drawn attention to the reduction of species biodiversity in the area and the spread of plant diseases due to monoculture in some areas.

Since the project began, the northern region of China has witnessed a growth in green cover from 5% to 13.5%, and some sections of the Gobi Desert are now flourishing with healthy vegetation, fertile soil and increased rainfall. After several years of development, many plants are growing healthy and strong in the test sites. Algae crusts are also forming on the “soil,” indicating that a new ecosystem different from the desert is being created.

If all deserts on Earth were to become fertile, it would have a number of consequences, both positive and negative for life on Earth. Among the negative ones, the absence of drylands would make many plants and animals unable to survive without these deserts. Their presence promotes the concentration and formation of minerals as necessary as potassium, nitrate or gypsum.

Countries such as the United Arab Emirates have requested cooperation with China to plant 10 square kilometers of arid zone in Abu Dhabi.