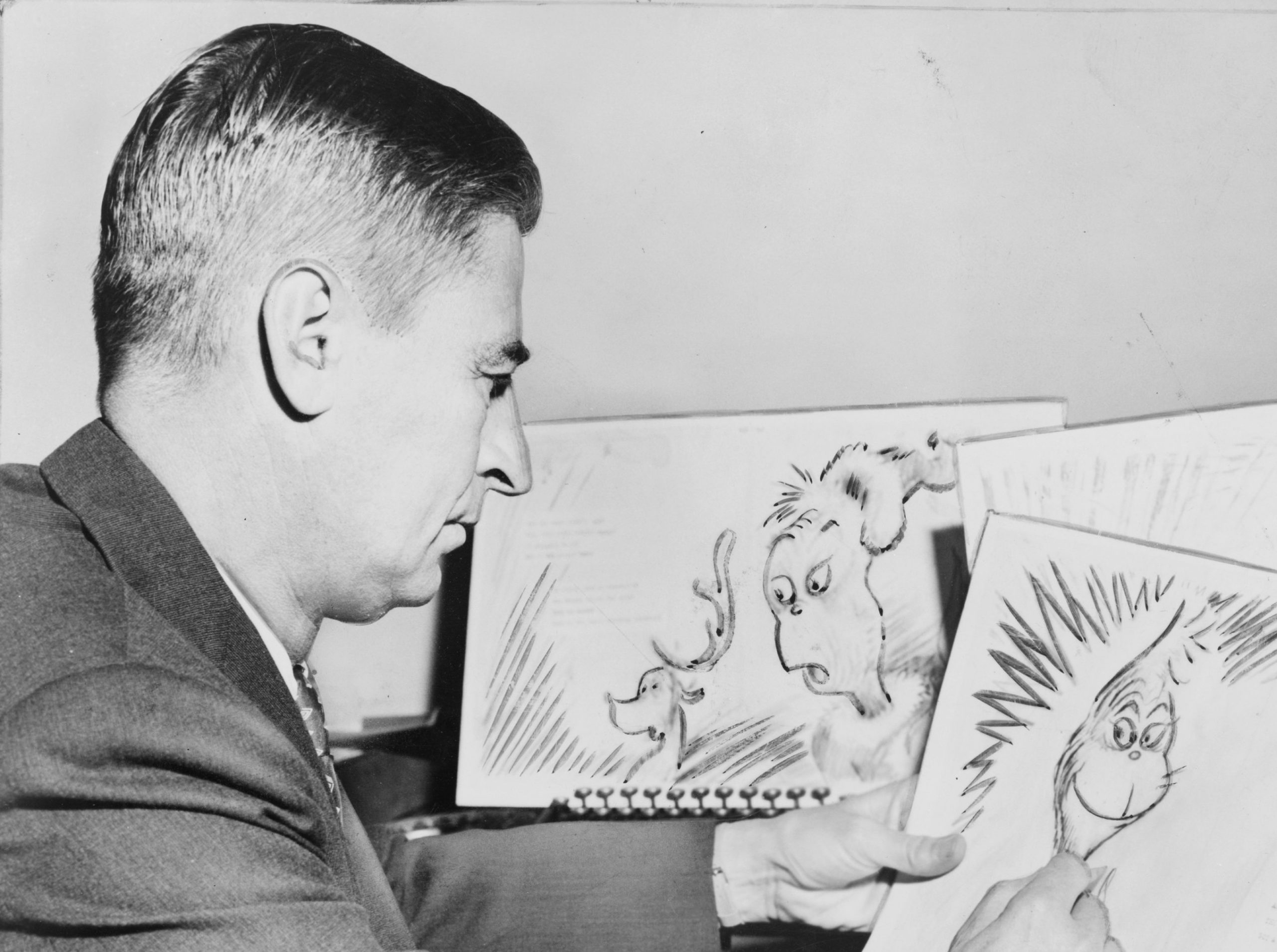 2 March 2021
▲
Geisel at work on a drawing of the Grinch for How the Grinch Stole Christmas! in 1957
CultureLiterature🌍 World

March 2nd marks the birthday of famous children’s author Dr. Seuss, a day to celebrate the crazy characters and unique world he created. Here we take a look at his life, and the contributions he made to the world of children’s literature.

Theodor Seuss Geisel was born on March 2nd, 1904, in Springfield, Massachusetts. The grandchild of German immigrants, he grew up around a wealthy extended family during World War I which is said to have helped shape his patriotism. After graduating high school in 1921, Seuss attended Dartmouth College where he joined a humour magazine called the Dartmouth Jack-O-Lantern. He eventually became editor-in-chief of the publication, however after being caught drinking he was forced to resign (this was during the Prohibition and there was a zero-tolerance policy).

During World War II Seuss drew over 400 political cartoons for the New York daily newspaper called “PM.” Many of them were politically charged against the dictators Hitler and Mussolini and supported civil rights for black and Jewish people, as well as showing his support of President Roosevelt’s policies and critiquing Congress. He also wrote films for the U.S. Air Force.

After the war, Seuss began writing children’s books and by the 1950s he lived in La Jolla, California, writing under the pen name by which we have come to know him, Dr. Seuss. These storied include some of his most well known creations, such as ‘The Cat in the Hat’, ‘How the Grinch Stole Christmas’ which has inspired various film versions, and ‘Green Eggs and Ham’.

Among the many cartoons Seuss drew during World War II were frequent negative depictions of Japanese and Japanese Americans. After the war, in 1953, Seuss visited Japan where he met and talked with people and witnessed the horrific aftermath of the bombing of Hiroshima. Following this, in an effort to atone for his offensive and anti-Japanese drawings, he wrote one of his most famous books, ‘Horton Hears a Who!’. Published in 1954, the book tells the story of an elephant who has to protect a speck of dust populated by tiny little people. The book’s hopeful refrain states, ‘A person is a person no matter how small’ and is dedicated to ‘My Great Friend, Mitsugi Nakamura of Kyoto, Japan’, seemingly in acknowledgement of his past mistakes.

4. A celebration of reading

Seuss continued to write until his death on September 24th 1991, and his legacy lives on as his beloved children’s books continue to sell in high numbers and inspire young people to read. In 1997, the National Education Association chose his birthday to celebrate reading and the first Read Across America Day was held in the USA the next year. Nowadays, his birthday is more than a celebration of his work, it is a celebration of reading and what this skill means to us, and the importance that children everywhere have the opportunity to learn.

5. The one who invented the word “nerd”

Dr. Seuss’ 1950 book titled ‘If I Ran the Zoo’, which books tells the story of a boy named Gerald McGrew who visits a zoo and wonders what it would be like if he ran it, was also the first documented use of the word ‘nerd’. Dr. Seuss is therefore seen as the inventor of the word and partly responsible for nerd culture.