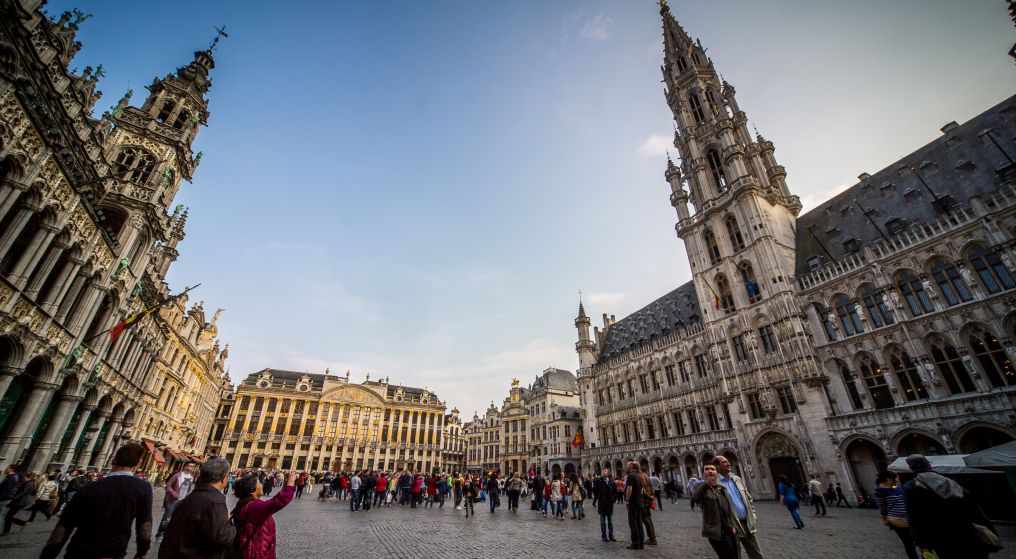 The Grand Place of Brussels in brief

The Grand Place – or Grote Markt in Dutch – is the main square of Brussels. The square includes the City Hall, the Maison du Roi, and many guild houses, encapsulating a mix of architectural styles from the Baroque, Gothic and Louis XIV period. Most of the buildings date back mainly to the late 17th century, although the earliest written references are from the 12th century. Back then, the square was a relevant political and commercial center. In 1998, thanks to its social and cultural importance, the square was inscribed in the UNESCO World Heritage List, increasing its popularity among international tourists.

With its highly aesthetic buildings and rich architecture, the Grand Place of Brussels is with no doubt one of the most beautiful squares in the world.

The magnificence of the square will leave you speechless. Anywhere you look, you will find historic buildings adorned with golden statues. The City Hall (Hôtel de Ville in French or Stadhuis in Dutch) is a jewel of gothic architecture with a tower and numerous statues. It was built in the early 15th century, but most of its ornamental features are due to the restoration campaigns conducted in the 19th century. Right in front of the town hall you’ll find the Maison du Roi (the King’s House), which hosts the City Museum. On both sides of these two monuments there are guild houses in Baroque style once occupied by powerful corporations.

Throughout the centuries, the Grand Place has been the venue of many historical events. In 1523, Hendrik Voes and Jan Van Essen, the first Protestant martyrs, were burned by the Inquisition there. In 1695, most of the buildings in the square were destroyed by French troops during the War of the League of Augsbourg, but they were quickly reconstructed.

Even today, the square hosts many festive and cultural events. The most extraordinary one is the Flower Carpet, which is organized every two years during the weekend of August 15th. During these days, the square is decorated with a 70m-long flower carpet made of more than 500,000 flowers (including begonias and dahlias). This breathtaking spectacle can be enjoyed by the balcony of the Town Hall, which offers a complete view of the carpet.

Even the Christmas tree installation is a must-see event in the Grand Place. The majestic tree is normally installed in the square in the end of November and is decorated in different ways, depending on the year. During Christmas time, the Grand Place becomes even more enchanting thanks to the sound and lights show that takes place every evening… A moving spectacle!

Around the Grand Place there are many restaurants, cafés and chocolates shops. If you want to try authentic Belgian specialties, they are absolutely worth a visit!