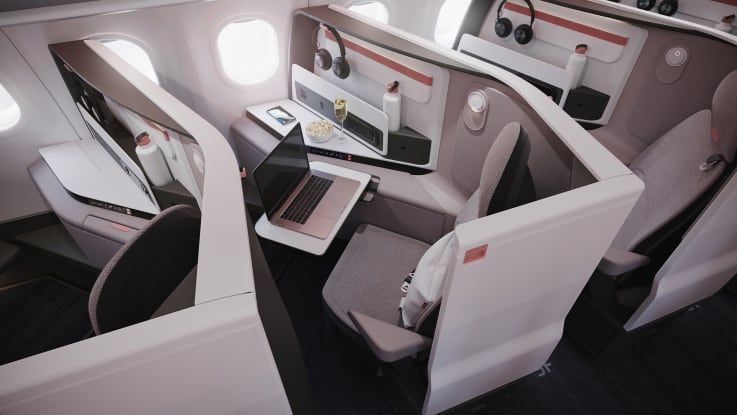 It’s not really a new idea but airlines offering business class services are considering the resurgence of doors to enhance passenger’s privacy.

Business class with doors debuted nearly 10 years ago aboard JetBlue’s Mint premium airplanes. Today, they are found on a dozen or so carriers including Delta, All Nippon Airways, British Airways and China Eastern, with more rolling out every year. One of the main reasons touted by aerospace players is the increased privacy that passengers enjoy. Another reason, which is mostly convenient, is that passengers seating on the aisle won’t be bothered with the occasional aisle bumps during flights.

There is undoubtedly a movement towards increased privacy on aircraft, flowing down from first class where the Emirates full height suite set a new standard, into business class.

Hamilton said that most business class seats have had privacy shells for a number of years now. “The addition of doors further enhances this sense of seclusion, closing you off the aisle, especially when lying flat in the bed position,” he added.

Air France has become the latest to introduce business class seats with sliding doors on some of its long-haul flights. Starting from September, the French airline will offer business-class travellers a sliding door on its new cabin aboard its B777-300s, initially on its Paris-New York service, to be followed by the rest of its B777-300 fleet.

An extra layer of privacy is just too expensive for some airlines to join the trend when considering a door — even if the added cost could bring more revenue, as passengers seem to like the idea.

“Doors have been out for a few years now, and year after year we have seen a constant rise of the share of airlines asking for doors in our surveys or in actual requests for quotations — up to a point where a large majority of airlines are now asking for it,” said Quentin Munier, executive vice president for strategy and innovation at Safran Seats. “The question is increasingly going to be less about whether or not to have a door but more about how to deliver in a smart and effective manner,” he added.

Chris Brady, an industry veteran and the founder of start-up seat maker Unum, said that airlines are divided on the issue. “I’m a bit conflicted,” Brady admited to CNN. “As a passenger I like a door. I find flying a wonderfully insular experience and revel in being alone, and a door helps. As a citizen I know they’re heavy,” which also means more carbon emissions.