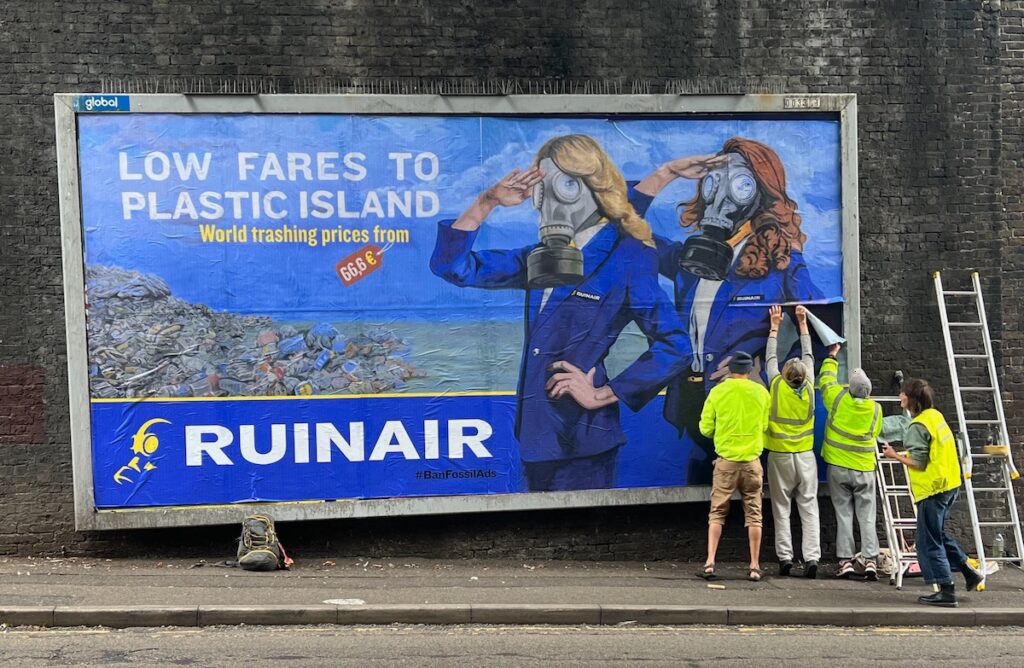 On 22 September, over 500 corporate advertising spaces across Europe were “hijacked” by members of the activist group Brandalism. The group, formed by anonymous artists, covered the ads with satirical artworks denouncing advertising for the aviation industry.

The works of Brandalism popped up in cities in the UK, Netherlands, Spain, Italy, Portugal, Belgium and France to draw attention to how advertising for aviation contributes to global warming.

The allure and glamour of high carbon lifestyles such as frequent flying has been purposefully crafted by the advertising industry and shows no signs of relenting – despite one of the hottest summers on record.

“I don’t think we can underestimate the power of ads to influence us in explicit or more subliminal ways and this project aims to underscore that and tear apart the normalisation of promoting products and services we know to be highly polluting and destructive”, said artist Lidsay Grime, who crested the Lufthansa billboard.

The group wants for a tobacco-style ban to be implemented on aviation advertising. Besides the direct impact, the group cites a Greenpeace report that estimated global airline advertising was responsible for 34 megatons of CO2 emissions in 2019, equivalent to the annual emissions of Denmark in 2017, or as much as burning 17 million tonnes of coal.

“Advertising agencies such as Ogilvy, VCCP, Dentsu, DDB Munchen need to consider their role in driving up emissions for airlines they work for such as British Airways, Easyjet, KLM and Lufthansa. We call on employees in those firms to refuse work for high carbon clients”, said Tona Merriam, from Brandalism.

“This project feels very timely because there’s still a total cognitive dissonance that comes from living in a capitalist world – yes, heatwaves and wildfires are now our reality but still, why don’t you jump on a plane and go on holiday? Advertising totally fuels this, selling an image of flying as desirable, easy, something to be done without thinking. The social acceptability is bought through a nice dollop of greenwashing with soothing imagery and mentions of “carbon offsetting” which is just a farcical PR exercise”, Grime added.