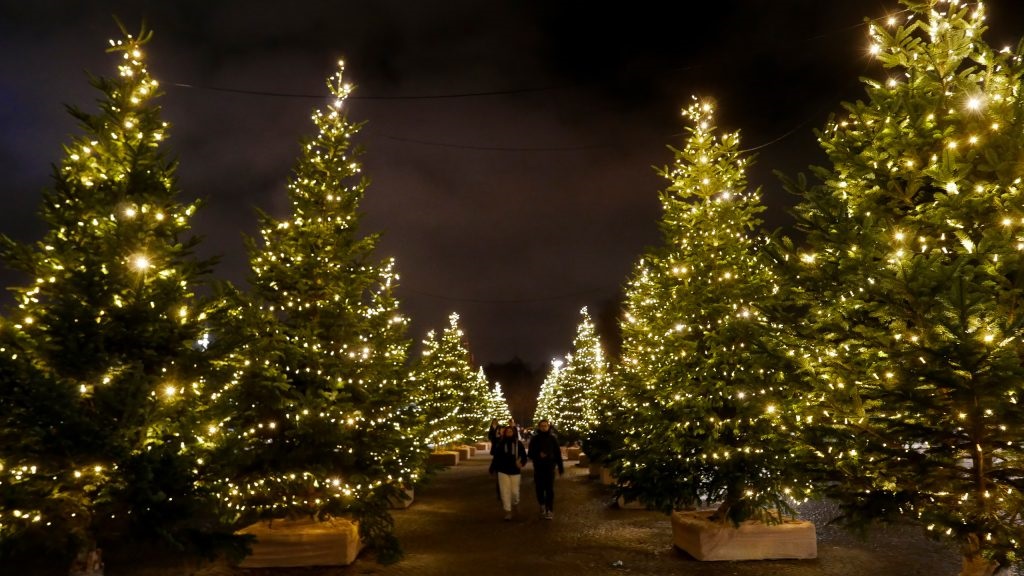 With its UNESCO-recognised ensemble of medieval buildings, colourful Dutch-gables and ancient bridges over intricate waterways, Bruges is an inspired choice for a weekend getaway at any time of year. Dutch-gable or Flemish gable is a gable whose sides have a shape made up of one or more curves. In our city we have mainly stepped gables. But in the dark winter months, when its squares are lined with twinkling fir trees and filled with thronging seasonal markets, the capital of West Flanders really shows its character. Belgian Christmas festivities start in November and go through the New Year into January, so it’s not too late to book. And this year for the fourth time the city has laid on ‘Winter Glow’ (Wintergloed), a newly mapped illuminations trail that visitors can follow to discover city landmarks and hidden corners in an extraordinary light.

You’ll find Bruges’s two Christmas markets within a stone’s throw of each other. One – the largest – is at the appropriately-named Grote Markt. Watched over by the city’s famously octagonal 83-metre-high belfry, the Markt was thronged with visitors when I visited on the opening weekend of the season. I loved the tempting cheese stalls, charming treen and decorations. The atmosphere was buzzing and friendly, scented with mulled spices and Christmassy street food. People were there to buy gifts and hang out, sampling beers and seasonal goodies for most of the day.

Nearby, a smaller market takes place on Stevinplein, a more intimate square surrounded by linden trees and named for the 16th-century physicist and mathematician who worked out the mathematical basis for fortifications. We sat at a table here warming our hands around a gluhwein and watching the world go by, while we planned our Winter Glow route.

Beyond the markets, Bruges offers a great range of high street and independent shopping. Make sure you check out Rombaux – a vinyl record and music store whose art deco interior is historically listed.

For culture, head to St John’s Hospital, where the 12th century hospital complex and apothecary are open to visitors. Face to Face with Death, the current exhibition includes a stunning portrait of tortured artist Hugo van der Goes, as well as illuminated manuscripts and fascinating footage of the restoration of a van de Goes masterpiece depicting the death of the Madonna.

In its fourth year, the city’s Winter Glow light experience trail invites visitors to explore Bruges in a new light, from the impressively stark lines of the Convention Center to the romance of the ‘lake of love’ ice-rink at Minnewater. Abbey courtyards fill with twinkling fireflies and tree-lined streets awaken on the way. So, how does it work?

As the evenings draw in, awakening-themed illuminations in different locations begin to shimmer and gleam. Projections create patterns in the sky and on beloved landmarks, and in some cases make this port town’s waterways seem to writhe and come alive. My favourite among the installations this year was the jaw-dropping work at the Old Waterhouse (Oud Waterhuis) – a medieval pumping station whose ancient brick structure is caressed and explored by lights accompanied by electronic music.

For refreshments, the outdoor Vorst Bar overlooking the ice rink at Minnewater is a great option on a sunny winter afternoon or evening. Wrap up warm.

Taking in Bruges’s sights with Winter Glow is a great way to discover this UNESCO gem of a city, while keeping yourself (and the kids) active this winter.

Bruges has a wide offer of hotels and guest houses, from modern chic, to historic hostelries and even castles. Gran Kaffee de Passage (see below) does rooms too, but I stayed in the 4* Hotel Portinari, which has long-stay parking on the doorstep and lies within walking distance of the historic centre. Spotless rooms are themed around Belgian painters and décor includes contemporary design pieces for a touch of style. Staff here were incredibly friendly, loaning out umbrellas and providing useful hints and tips about the city.

For breakfast, brunch and lunch, Blackbird Cafe on Jan van Eyckplein is delightful. The bagels looked to-die-for. Blackbird’s offering is vegan and with top-end coffee, home-made juices, an enormous plateful of scrambled ‘eggs’, avocado, tomato, humous, artisan bread, croissant and jam, I did not miss the meat one bit. I’d go as far as to say this is one of the best brunches I’ve had in Belgium.

The Grote Markt rubs shoulders with lively-terraced restaurants bedecked with twinkling Christmas lights. Beyond that there are addresses a-plenty to discover too. A flotilla of passionate local North Sea Chefs have clubbed together to share creative recipes and data on fish usually considered by-catch. Indeed Bruges’s food scene is experiencing a renaissance, with over 35 restaurants rated by Michelin, Bib Gourmand and Gault & Millau.

For the evening, we found ourselves at Gran Kaffee de Passage, just a few minutes on foot from the historic centre and absolutely rammed – not with tourists, but locals, who chatted amicably to us. The place has been around for about 8 years but has been cleverly decorated to give the appealing appearance of an old-style ‘Grand Café’ brasserie, with distressed walls, cosy lamplight and gleaming mirrors where curlicue handwriting declares the specials.

We started with a slice of salty slow-cooked pork belly to share, then I plumped for the haddock on a bed of mash and endives – a comforting combo – while my companion went for hangar steak and the obligatory chips. Delicious.