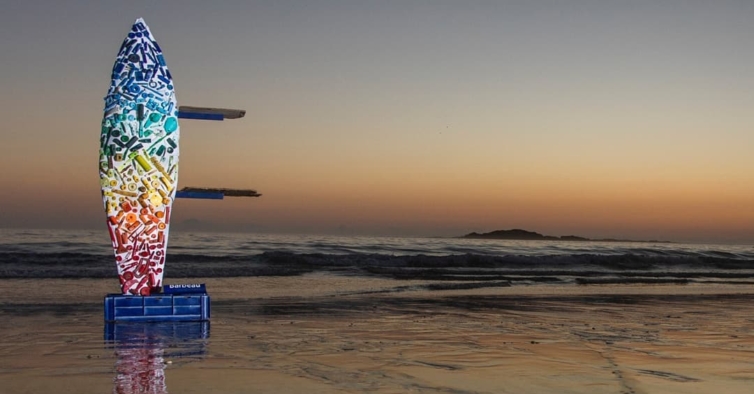 A Portuguese couple has embarked on a project that uses art to raise awareness on pollution at sea. The inspiration? The stories that fishermen and fisherwomen from Vila Chã, a parish in Vila do Conde, have told them. The couple has created works of art with garbage collected from the beach. Their creations have already been noticed and the invitations multiplied in 2021. Along the way, they published three books for children.

The adventure began in 2017 when Teresa, a sociologist by training, and Bruno, a photographer, started volunteering at a House-Museum in Vila do Conde, where they created activities for children. They repeated the experience in a partnership with the Fishermen’s Mutual, where they once again focused on local history with “Professions of the Sea”. Meanwhile, they were paying more and more attention to the pollution that accumulated on the sands and dunes.

Their first exhibition brings together many of the small objects they collected, arranged in a colorful sequence. Some are combined to recreate marine animals. The panels gave rise to the exhibition ‘Beach – Other Perspectives’. “We started to collect more trash and that’s when Bruno created the first pieces of art,” said Teresa to the Portuguese news outlet NiT.

The ’Biodiversity That Tells Us History’ exhibition, which has 12 elements of biodiversity from Vila Chã, tells the history and evolution of fishing. There were animals named after people, the same people who revealed the secrets of professions from former times, their difficulties and joys.

This was the case of the sardine Lourença, named after a local fisherwoman, of the octopus Ferreiro, which “symbolizes fishing by hand”, or of the shark Guilherme, a codfish fisherman who had to face sharks. Although it is not currently on display, Teresa and Bruno’s goal is to take the pieces to educational and cultural centers. One of Bruno’s most recent passions is the creation of figures made with plastic picked up on beaches.

For the couple it’s crucial to keep the focus on the place where everything begins and ends, on the area’s beaches, where it is necessary to collect all the garbage and raw material for the works, especially in winter, when a lot of trash washes ashore.

We collaborated with a project by a German biologist who ran along the Portuguese coast picking up trash. Then ‘Sea Life’ asked us if we were available to create pieces. We made a turtle for them, Oceana, and then Einstein’s face

One of the faces the couple created is that of marine explorer Jacques Cousteau – currently on display at Vila do Conde’s Centro de Ciência Viva -, but also Tio Rão, a local fisherman and iconic figure from Vila Chã, on display in the parish’s Largo dos Pescadores.

Bruno created a garbage sculpture to recreate the logo of Barbeau – a company that collects garbage in partnership with fishermen to later transform it into yarn that is used in towels – and wolf figures for a project in Gerês. Along the way came a third children’s book, ‘A Treasure on the Beach’.