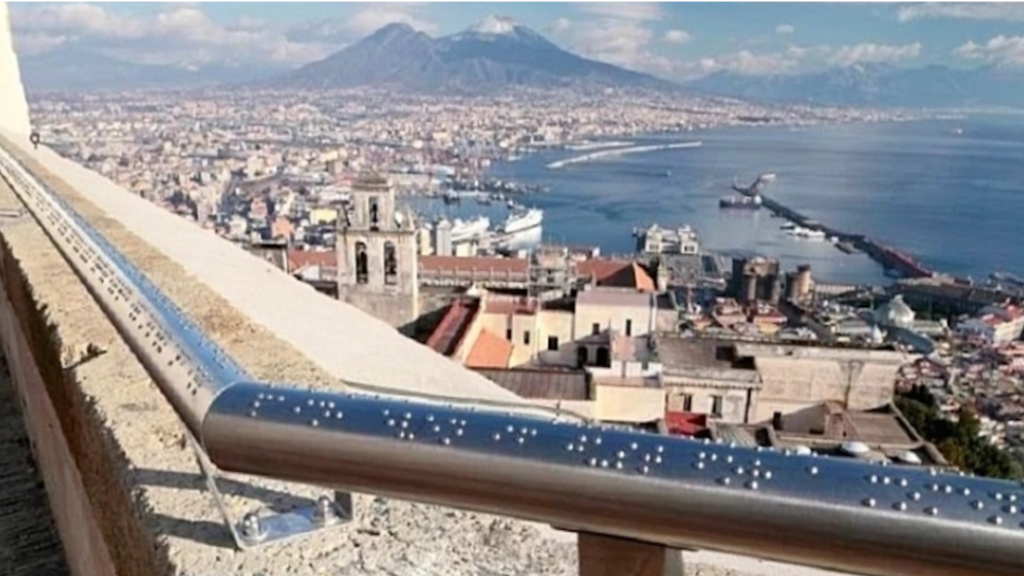 This Italian viewpoint has a railing with descriptions in Braille

A railing at a viewpoint in Naples has been getting a lot of attention on social media. Images have gone viral. Why? According to Euronews, it all started as these stories usually do: someone noticing the detail and sharing it, and for some reason – the theme of inclusion, the timing, whatever – the image instantly went viral on Twitter and Instagram.

The St. Elmo Castle railing has a description in Braille but for the first four years of its life, its existence had gone nearly unnoticed. Until August of this year 2021. Those who shared the image of the railing on social media asked for more such initiatives.

The Castle of Santo Elmo, in Naples saw the birth, in January 2017, of an inclusive work by a local artist, which consists of a huge metal handrail with Braille lettering that runs along all the paths and staircases of its Plaza de Armas.

“Follow the Shape” is the name of the work by Italian artist Paolo Puddu, a graduate of the Neapolitan Academy of Fine Arts. In this fortress from the Middle Ages where thousands of tourists usually pass by every year, the view from the top of the hill is 360 degrees for the whole city and enveloping, with the imposing Mount Vesuvius on the horizon.

Speculation from users on Twitter suggests that artist Paolo Puddu decided not to reveal the exact text quoted in Braille for those who cannot read it. The initiative, which won a contest called “A work for the castle”, whose theme was “Just a look – relationships and encounters”, allows all visually impaired people visiting Santo Elmo to understand the whole history and landscape, in a moment still pulling at poetry and imagination, through the experience of following the handrail with their fingers.

There are brief descriptions in Braille of the breathtaking views of the castle, as well as quotes from poets and authors in Italian and English, including phrases from the 1919 book “Earth and Man” by Neapolitan writer Giuseppe De Lorenzo. Braille readers are encouraged to “follow the shape” as they discover verses from the novel.

Dimitrios Buhalis, a professor at Bournemouth University, said to Euronews that, “People with disabilities have normally been discriminated against and excluded from many parts of society, especially from things that are not essential to life, such as leisure.” Buhalis is the author of several books on accessible tourism management. He believes that citizens need to change their attitude towards inclusion and that steps like these help.

Many people see it as black or white, accessible or not accessible. In reality, nothing is absolutely accessible to everyone

Small interventions like these are useful for people with disabilities, Buhalis explained. The handrail is an example of an initiative with a very low cost intervention but which actually makes a big difference for people who are blind or partially sighted.

The railing at the Castle of Santo Elmo is not the only initiative of this kind. Along with the National Archaeological Museum, Capodimonte and other Neapolitan museums, it is part of the “Naples in your hands” network, a project without major funding but which has had positive results.