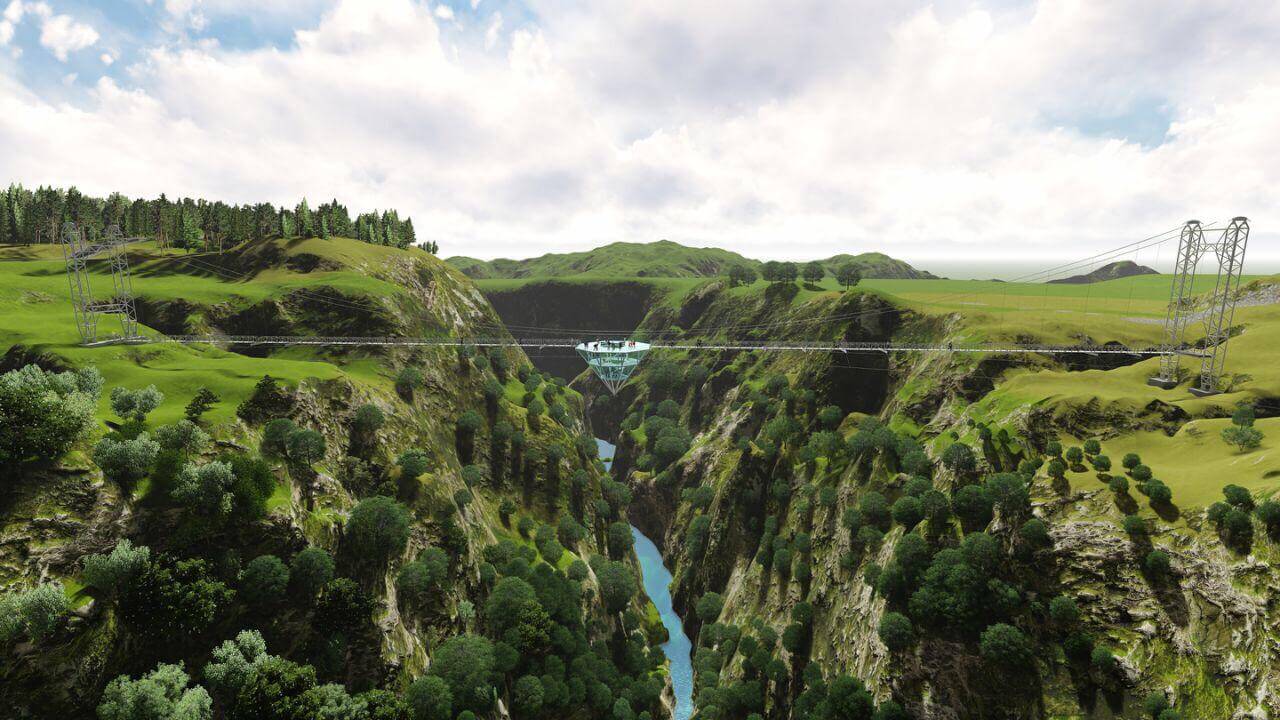 On June 14th, a 240-meter-long glass bridge with a diamond-shaped bar suspended in the center was inaugurated at Dashbashi Canyon, in Georgia, in the presence of Georgian Prime Minister Irakli Garibashvili. A two-hour drive from Tbilisi, Dashbashi is located in the stunning Tsalka nature reserve. Although it is a long and winding drive, the views and the final location are more than worth it.

Dashbashi canyon is located at an altitude of 1100-1500 meters above sea level and is 8 kilometers long. The canyon covers 669 hectares and is filled with spectacular waterfalls and caves along its lush green slopes.

The Diamond Bar was designed and planned by Tomer Mor Yosef, vice president of the Kass Group, and its construction took three years involving teams from the Netherlands, Belgium and Germany who had to build the steel and glass structure without damaging the canyon.

The transparent Diamond Bar is the largest and tallest hanging structure in the world and competes for a Guinness World Record. It weighs a total of 9 tons and can hold about 2,000 people at a time. Pnina Revah, CEO of Kass Group told The Jerusalem Post that they identified Georgia as a place with great potential, as tourism to the country is increasing every year.

It is a country with incredible views. There are not many places that can offer such beautiful landscapes and we took this reserve and built this wonderful project

According to Revah, Dashbashi Canyon was the perfect place for the bridge, which allows visitors to enjoy the views of the reserve. Designer Tomer Mor Yosef explained that the idea to build the Diamond came from how the canyon itself is shaped like a diamond, reaching some 800 meters at the top, while only 4 meters at the bottom.

“The aim was to create an extreme, exciting, and unforgettable moment that would arouse all five senses of the guests and will manage to stay imprinted in their memory,” Yosef said to the Georgian Journal.

According to CNN, authorities in Georgia hope that the bridge will attract more tourists to the site. The world’s longest glass-bottomed bridge, suspended 492 feet (150 meters) above ground and measuring 2,073 feet (681 meters) in length, opened in the region of Son La province in northwestern Vietnam in April.

The canyon, carved by the Ktsia River, was recognized as a natural monument of Georgia in 2016 and receives thousands of visitors each year. Kassland, an Israeli-Georgian venture, includes the glass suspension bridge, as well as a zip line for cycling across the canyon, a 40-meter “swing” on the cliff, a restaurant, and two-story villas that can accommodate 2-6 guests and overlook the reserve and are less than 50 meters from the bridge. While 20 suites are ready for guests, a total of 120 are scheduled to open next year, as well as a hotel that will include 100 rooms.

In addition to on-site attractions, visitors can enjoy jeep tours, hiking in the reserve, thermal pools and a 1.5 km trail from the site to the waterfalls below. The company is also building a campground, a water park, and a music festival space with a capacity for 100,000 people.

The investment in the project, as well as the development of the reserve, is estimated at US$25 million (23,734,250 euros). It has taken three years of planning and construction.