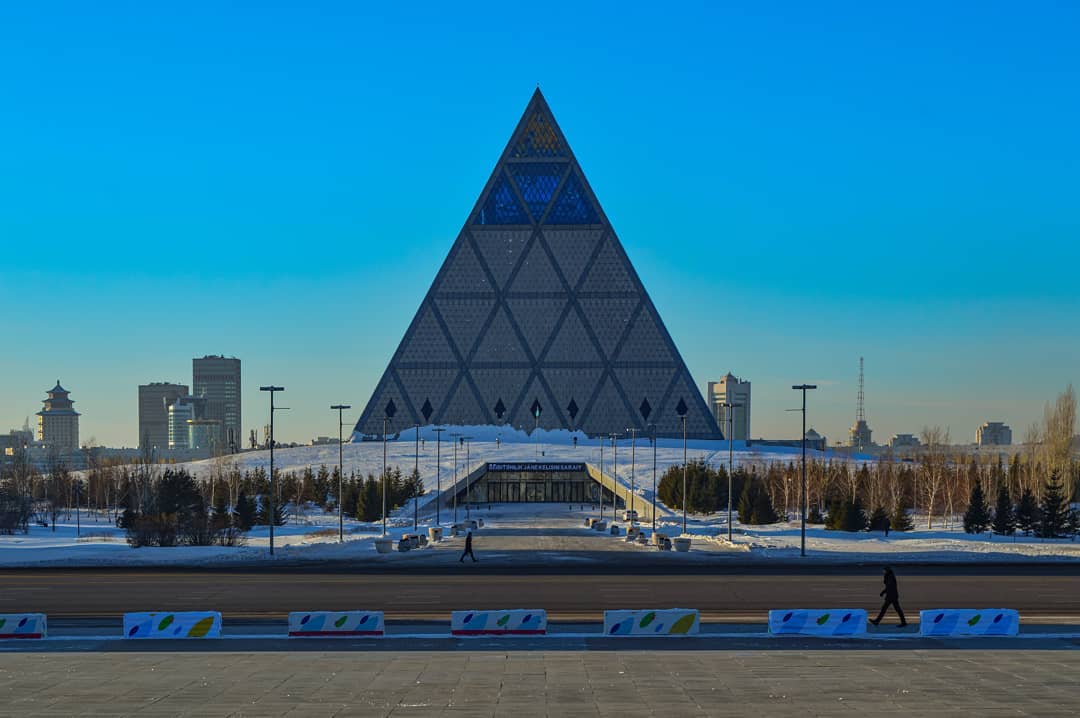 Any of our faithful readers will know that we’ve written quite a lot about Kazakhstan already. No wonder, as the country has a lot to offer: from rafting tours to (thermal) resorts, you can really have it all. Something we haven’t paid attention to yet, though, is Kazakhstan’s architectural scene. And quite frankly, that’s a shame. So it’s about time we set things straight and dive into the country’s architectural wonders.

As the title of this article indicates already, we’ll concentrate on the more futuristic side of things. It goes without saying though that this is not the only architectural style to be found in Kazakhstan. Admirers of the Soviet architecture will for example find what they’re looking for at the Kazakhstan Hotel in Almaty and if you want to know a bit more of the traditional Kazakh way of living, you should definitely try to have a look inside a yurt. However, if it’s futuristic you want, head to Nur-Sultan instead.

When wandering through the Kazakh steppe, you might at first not believe your own eyes when Nur-Sultan appears at the horizon. Some people have called it a mirage-like experience in the past and we definitely get why. Nur-Sultan (previously known as Astana) has been the country’s capital since 1997 and was built from scratch, meaning every road, every building was carefully planned beforehand. In that perspective, you could compare the city to Washington DC or Brasilia, although it definitely looks different. Let’s have a look.

This might just be one of the most impressive buildings you’ll come across during a trip to Kazakhstan. As you’ll have noticed, the design of Khan Shatyr looks a lot like an enormous tent and that’s no coincidence. Its name literally means “Khan of the tents” and it’s also the biggest tent-shaped structure in the world. Inside, there’s a shopping and entertainment center which is well worth your time but that’s not the biggest surprise of this building. Thanks to the innovative way in which it’s constructed, the Khan Shatyr actually houses its own micro-climate inside its walls. So no matter the temperature outside, here, it’s always cozy yet never too warm.

Yet another futuristic gem in Nur-Sultan. This building was designed by the Italian architect Manfredi Nicoletti and unveiled in 2009. Even though the shape of the Concert Hall is quite abstract, the design was actually inspired by flower petals. Inside this beautiful structure you will not only find three concert halls, but also multiple shops and restaurants, making it the perfect place to relax. Moreover, the building was developed in such a way that the space in the middle would act as a public square where people are welcome year round.

Wherever you go in Nur-Sultan, you’ll pretty much always be able to spot the Baiterek Tower. It towers over the other buildings in the city and has become a true symbol, meant to depict an egg suspended in a large tree. This image originates from a folktale about a magical tree of life and a bird of happiness, where the bird laid its egg between two branches of a poplar tree. According to local legend, the design was drawn on a cocktail napkin by President Nursultan Nazarbayev. Whether or not that’s true, we don’t know, yet it sure is an impressive sight. It’s also possible to actually go inside the tower and you could even enjoy a coffee on the top floor with a splendid view over the surroundings.

4. Palace of Peace and Reconciliation

When looking at this building, you can’t help but be reminded of the ancient Egyptian pyramids. And even though they more or less share the same shape, they’re separated by multiple millenniums. The Palace of Peace and Reconciliation was designed by the London-based architecture firm Foster and Partners, which you might know from the London City Hall and the Carré d’Art in Nîmes. It was constructed to house the triennial Congress of Leaders of World and Traditional Religions. If you want to visit it, go to the Museum of National History or the Library of Spiritual Religious Literature housed inside.

This might not be a building in the strictest of terms but Minima | Maxima definitely deserves a spot in this futuristic list. The installation was designed by MARC FORNES / THEVERYMANY, an art and architecture studio based in New York City. It was part of Expo 2017 and made out of ultra-thin aluminium. The designers push people to step inside the structure as according to them it feels like being “transported to a strange, future, science fiction world, removing visitors from themselves and finding within a sense of naive wonder.” So if you’ve got a minute to spare, don’t hesitate to unchain your inner child and wonder over this piece of art.