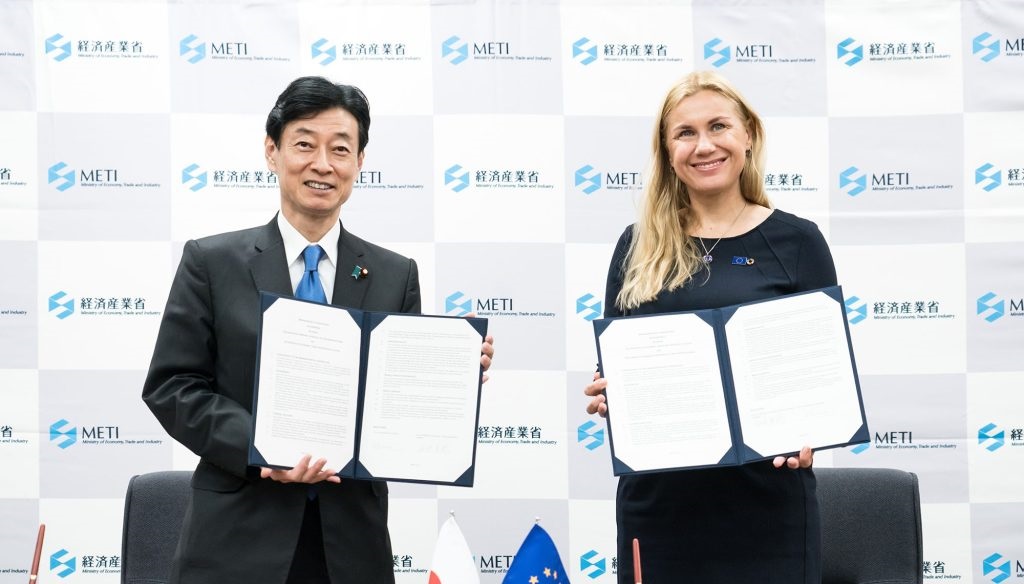 The EU and Japan have officially intensified their cooperation on hydrogen to spur innovation and develop an international hydrogen market. The new partnership follows the EU-Japan Summit in May 2021, when a Green Alliance was established and hydrogen was highlighted as a key area of future cooperation. Since Japan is set to be a net importer of hydrogen, establishing a full-scale international hydrogen supply chain is one of the country’s key targets.

As frontrunners in hydrogen technology, the EU and Japan have signed a Memorandum of Cooperation (MoC) , on December 2, to  work together for sustainable and affordable production, trade, transport, storage, distribution and use of renewable and low-carbon hydrogen. Both sides have set the long-term ambition of being climate-neutral by 2050, and closer cooperation on methane emissions is also under discussion.

The cooperation is intended to help establishing a rules-based and transparent global hydrogen market without distortions to trade and investment, as expressed by the signing parts in Tokyo, European Commissioner for Energy Kadri Simson and Japanese Minister of Economy, Trade and Industry, Yasutoshi Nishimura.

This Memorandum of Cooperation is an important milestone in deepening the EU’s energy cooperation with Japan, which is based on shared values and interests. Kadri Simson, European Commissioner for Energy

Historic day for #EU–#Japan energy partnership: we signed w/ Minister Nishimura a Memorandum of Cooperation on #hydrogen, to boost innovation & help create a🌍market for this fuel of the future.

🇪🇺 & 🇯🇵 are both trailblazers for H2 technology & together we can move even faster. pic.twitter.com/Fb7hYroS3d

“[Today’s] agreement confirms the commitment of the EU and Japan to work together on hydrogen, which is key for both our climate goals and energy security. This Memorandum of Cooperation is an important milestone in deepening the EU’s energy cooperation with Japan, which is based on shared values and interests,” stated Simson.

The MoC will provide a framework with detailed proposals for cooperation between the EU and Japan. However, a set of areas has been identified in which governments, industry, research institutions and local authorities in the EU and Japan will be encouraged to cooperate, including policies, regulations, research, project development as well as education and upskilling and reskilling for workforces.

In 2017, Japan became the first country to formulate a national hydrogen strategy as part of its ambition to become the world’s first “hydrogen society” by adopting the fuel across all sectors in a roadmap. Alongside government investment in hydrogen and fuel cell technologies – totalling around €649 million in 2020 – policymakers have set mobility targets of 800,000 fuel cell EVs and 900 hydrogen refuelling stations by 2030.

By October 2021, Japan published its “Strategic Energy Plan“, which placed climate change and decarbonisation at the top of the agenda and adopted  the core targets for hydrogen and ammonia under the Green Growth Strategy. The additional new targets include the introduction of co-firing — 30% hydrogen and 70% natural gas — in gas-fired power plants as well as the construction of pure hydrogen-fired power plants by 2030. Moreover, hydrogen and ammonia are to comprise 1% the country’s overall power generation mix by 2030.

Nonetheless, because the country lacks the natural resources needed to deploy sufficient levels of wind or solar to generate clean hydrogen at scale, Japan is developing long-term supply agreements to import hydrogen from overseas.

Tokyo is also building a hydrogen-powered city that will serve as a prototype for sustainable cities in the future. The project was developed to enable residents and researchers to test, in a small controlled environment, how the combination of the environment and technology related to autonomy, artificial intelligence and robotics would work.