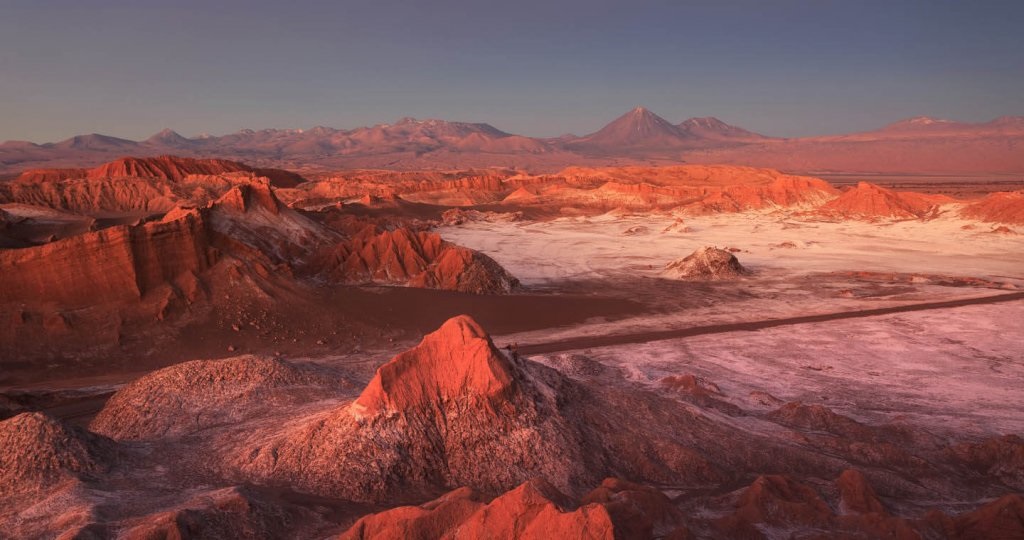 Chile is creating a national park in the driest desert in the world. The Atacama Desert is one of the sunniest places on Earth. On average, it receives just 15 mm of rainfall a year. Some parts get barely any rain. The desert is so dry it’s been used as a practice site for Mars expeditions. But every 3 to 5 years, downpours cause buried seeds to germinate turning this arid wasteland into a blooming carpet of flowers.

According to Reuters, almost 200 species of flowers have been found in the Atacama Desert. The Desierto Florido or Blooming Desert draws tourists and botanists from all over the world. Chilean President, Gabriel Boric, has announced the creation of the Desert Blooming National Park to protect the area and boost tourism. It will be Chile’s 44th national park.

The Journal of Asia-Pacific Biodiversity reports that national parks and protected areas are one of the best ways to safeguard biodiversity. Currently, more than 110 countries have protected areas within their borders.

On Sunday October 2nd, during his visit to the Atacama Region, President Gabriel Boric announced the creation of the Desierto Florido National Park in the first quarter of 2023. The Minister of Agriculture, Esteban Sepúlveda, added that there is a 1,200 million pesos project agreed between National Forest Corporation (Conaf) and the Regional Government.

Desierto Florido national parks aims to protect the fabulous ecosystems of the Atacama desert, focusing on the flora. Here, a beautiful desert bloom sometimes occurs between the months of September and November when rainfall is exceptionally high. The Atacama desert, the driest on Earth, usually receives less than 15mm of rain a year. But in winter, rain can happen in the south of the Atacama region. When it does, about 200 species of flowers bloom and the flowering desert becomes a popular tourist attraction.

There are more than 200 species of flowers and an exquisite fauna that must be protected.

Most of these flowers are endemic to the Atacama region. An increased level of protection will ensure the tourists’ behavior is responsible. In recent years, concerns have been raised by environmental organizations about the possible negative effects of large numbers of tourists visiting the flowering desert, the illegal trade of native flower species and the development of motorsport. Desierto Florido national park is the best solution to develop sustainable tourism in the area while learning more about these beautiful flowers.

The President, together with the Minister of Government, Camila Vallejo; his peer of National Assets, Javiera Toro; and the Minister of Agriculture, Esteban Valenzuela, toured the Desierto Florido with Conaf personnel. The Desierto Florido will be located in the sectors of Llanos and Chañarcillo, about 30 km south of Copiapó and 80 km north of Vallenar in southern Atacama region. It is far from the most famous places of the Atacama desert, about 850 kilometers away from San Pedro de Atacama. The location is about 800 kilometers (a 9-hour drive) north of Chile’s capital Santiago de Chile.

Marcos López, mayor of Copiapó, assured that the announcement not only represents an advance in the environment and preservation, but also an enormous incentive for the commune and the region. The antecedents to declare the Desierto Florido as a park must be presented to the Council of Ministers in order to be voted in the next session in November.

The Minister of Agriculture, Esteban Valenzuela, advanced that there is a project of 1.200 million pesos that was agreed between the portfolio he leads, Conaf and the Regional Government to make the signposting, the hut, improve the surveillance and the trails.

This will make it possible to convert the space “into a living museum of the diversity of the north forever”, stressed Valenzuela. The Minister of National Assets, Javiera Toro, explained that “the flowering desert is a heritage of biodiversity and an amazing natural spectacle that is put at risk every time someone cuts a flower, steps on or drives through this territory”.

More than 200 species of plants bloom here every 3 or 5 or 10 years, depending on climatic conditions, which at the same time allow the arrival of insects and fauna in search of food. Regarding the current stage of the process, Minister Toro explained that “we are currently working on defining the polygon, on determining the area that will be protected by the National Park”.

The Minister of the Environment, Maximiliano Proaño, explained that Chile is facing three important crises and one of them is the loss of biodiversity. “Protecting our ecosystems where a great diversity of flora and fauna species live is crucial to ensure a livable future for our children. This area has a high biological value and has many endemic species,” added Proaño.