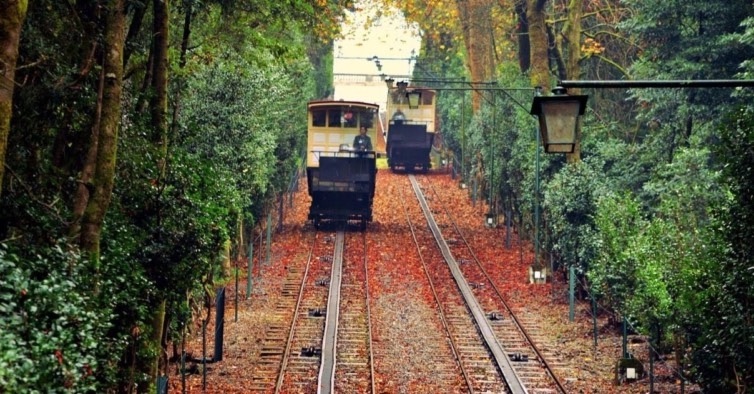 The Bom Jesus elevator in Braga celebrated 140 years of existence on March 25th. The elevator is the first of its kind on the Iberian Peninsula and the only one in the world in operation with a water counterweight system, which is to say that it uses the force of the water to make the cabins go up and down the long ramp to the Sanctuary of Bom Jesus do Monte. It is, since 2019, part of the World Heritage classification assigned by UNESCO to the shrine and also a monument of public interest.

To climb the Bom Jesus hill there are more than 500 step in total, and so the locals used their ingenuity to find a more practical alternative: thus was born the elevator. It offers a view to the city of Braga and there, the four fountains of the Evangelists Ground do stand out: Saint Matthew, Saint John, Saint Luke and Saint Mark.

A unique tranquility emanates from the forest and the gardens of Bom Jesus do Monte: with truly romantic corners, leafy trees and truly scenic bridges and lakes, wander around and be fascinated with the trails surrounded by such a pure and untouched nature.

On Friday, March 25th, the trips were free and there was a commemoration plan that included the inauguration of the exhibition “Estância Elevada”. In the following weeks there will also be guided tours of the elevator and even a photography contest. The celebrations run until September.

The man responsible for building the elevators was a 19th century businessman from Braga named Manuel Joaquim Gomes. From bread-making to many other businesses, he became one of the region’s magnates, who launched public transportation in the city, but who ran into the sanctuary’s gigantic staircase. Until then, access was by road or by the more than five hundred stairs.

It was on the banks of the elevation that Joaquim Gomes imagined the new transportation that would travel the steep 267 meters. The innovative elevator replaced the vehicles on rails, pulled by animal traction. The engineer was provided by a Swiss engineer, Nikolaus Riggenbach, supported on the ground by Raul Mesnier de Ponsard, a Portuguese engineer of French descent who was also involved in the construction of other elevators in Portugal, such as those at Lavra, Glória and Santa Justa.

The work took about two years to be completed, but the efficient system continues to work to this day. It is thanks to the underground water, captured by pipes, that at the moment of the ascent fills a reservoir controlled by the driver – which can hold more than five thousand liters. This is what happens to the cabin that is at the top and which, becoming heavier, goes down as the one at the bottom goes up the ramp.

It is an example of sustainability, since it does not use energy. It only uses the water from the underground, which is not part of the public network. A curious detail: the two pairs of rails rest on wooden beams used from the trees that were cut down to open the way to the top of the sanctuary.

Each cabin can transport more than 30 people, and each journey can take between two to four minutes.