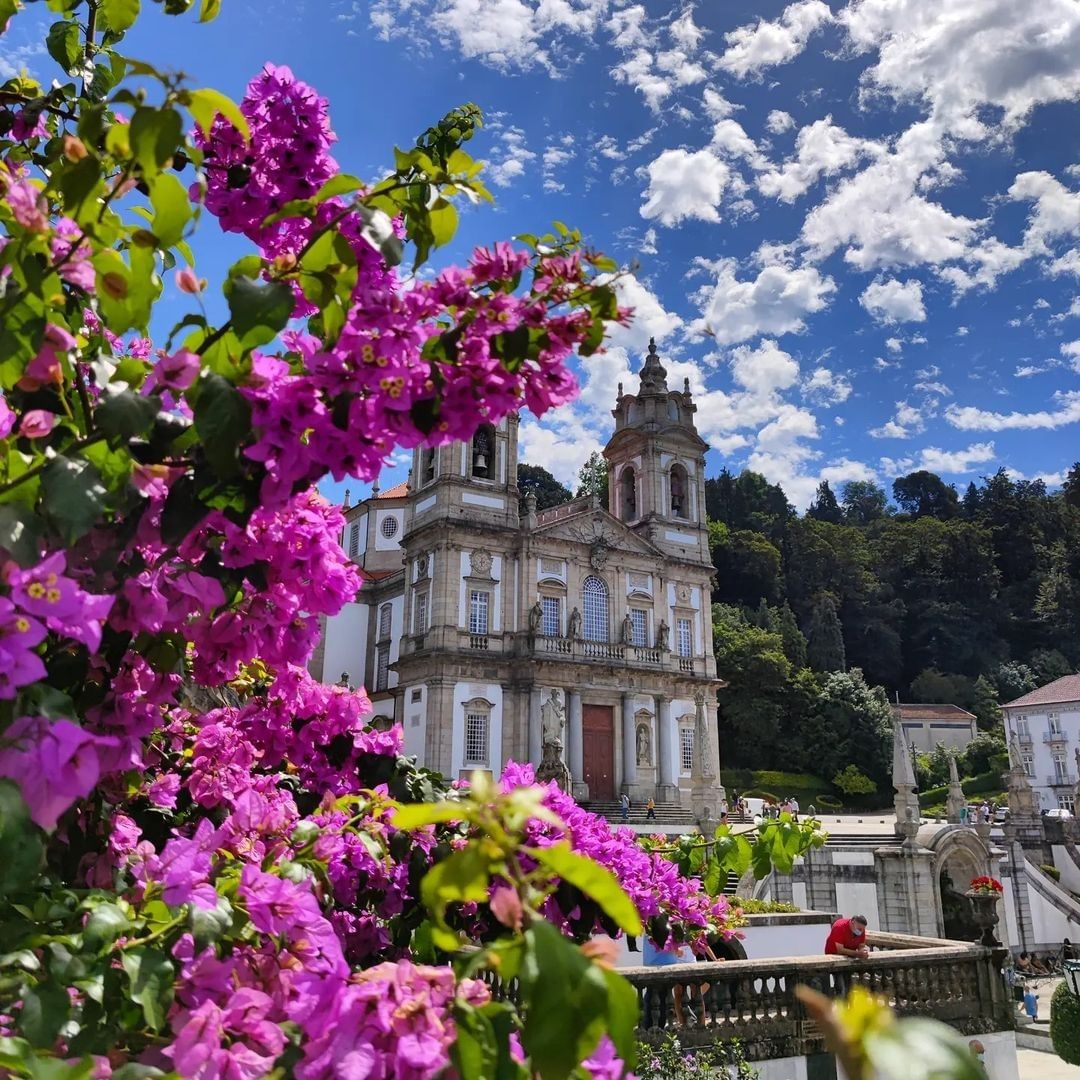 The Sanctuary of Bom Jesus do Monte, in Braga, Portugal, has over 500 steps, 20 fountains and 32 statues. It still features 19 chapels on the stairway to the Basilica and 5 more on the way to the Evangelists’ Ground, and over 1.2 million visit it every year. It is very sought after for weddings and baptisms.

The monument, recognized by UNESCO as a World Heritage Site, includes Staircase of the Portico (376 stairs), Staircase of the Five Senses (104 stairs), Staircase of Virtues (59 stairs) and one more staircase from Largo do Pelicano to the Churchyard with 34 stairs. Located in the north of Portugal, it offers a view to the city of Braga and there, the four fountains of the Evangelists Ground do stand out: Saint Matthew, Saint John, Saint Luke and Saint Mark.

It is an extraordinary example of a holy hill that so much represents the intense narrative of the Passion of Christ with traces of roman Catholicism. Dating to the fourteenth century, the Sanctuary has gained special religious and cultural meaning throughout the centuries, mainly since the early seventeenth century, when the Brotherhood of Bom Jesus do Monte was founded.

It is a hard path and, just like anything that is worth it, it demands sacrifice. Just to get to the top of Bom Jesus do Monte, a journey of 573 stairs will await you, but the magnificent staircase is divided in three main segments, just so you can stop at each one and appreciate the beauty of the monument and the gorgeous view to the city of Braga. Explore the inside of the basilica and admire its façade made from straight lines, adorned with friezes and classicist framings, the splendor of this impressive structure are well worth it.

1. An ingenious elevator: unique in the world

In case you do not want or are not physically capable of climbing it on foot, there is a very easy alternative to reach the top: the elevator. You will enjoy a comfortable ride of a 267-meter slope that is parallel to the staircases. Inaugurated in 182, it is unique in the Iberian Peninsula and the oldest in the world in service. Its functioning makes the work executed by the Portuguese engineer Raul Mesnier du Ponsard one of the unmatched examples of engineering of all Portugal.

The funicular has two cabins, both with water tanks, which really are the engine of this funicular so full of history and stories to tell. When at the top, the cabin’s tank is filled with water, which volume will depend on the number of passengers. When the brakeman releases the breaks, the difference of weights will make the cabin at the bottom of the slope, and it is thanks to this genius method that this elevator is moved.

2. The nature surrounding it

A holy tranquility emanates from the forest and the gardens of Bom Jesus do Monte: with truly romantic corners, leafy trees and truly scenic bridges and lakes, wander around and be fascinated with the trails surrounded by such a pure and untouched nature. Explore its secrets, contemplate the views over the cliffs and regain energies to continue walking.

It is fundamental to visit the caves with the magnificent stalactites. From these caves, the highlight is the grotto designed by José Martins Branco and inaugurated in 1903.

You will be walking along flower plots and bushes and can enjoy the great views from the belvedere. At the end of this cave you will find a small lagoon which will feel like an oasis in the middle of a desert.

The water that runs along the cave meets the lagoon, giving it an absolutely magical and brilliant effect.

4. Staircase of the Five Senses

The last three chapels of the Via Sacra representing the apparition of Jesus Christ to Mary Magdalene, the House of Emmaus and the Ascension are found here. The yard open in the eighteenth century has a fountain at the center as well as the statues of the four Evangelists – Matthew, Mark, Luke and John.

This monumento is special, because i tis located on a pedestal where before was the tower of the ancient church of Bom Jesus do Monte. Saint Longinus was one of the soldiers present at the Crucifixion of Jesus Christ who soon converted, later becoming a saint.

As for the so named Staircase of Virtues, it starts at a yard that was designed by Carlos Amarante at the same time as the Basilica. This is the reason why one can notice some differences between this neoclassic style staircase in contrast with the baroque style of the remaining ones. As for the fountains, they allude to Faith, Hope and Charity.

At we finish climbing the Staircase of Virtues, we arrive at Largo do Pelicano and, although we did not reach the Ground of the Basilica, it is already possible to see the imponent and magnificent baroque garden which visit is a must. The famous Basilica will lie ahead, precisely at the Basilica’s Ground, and this is the point that whoever climbs the 673 stairs of this deep journey of faith desires to reach. Here you can observe several statues representing biblical characters connected to the Passion of Christ: Annaz, Caiaphas, Herode, Pontius Pilate and the Centurion.