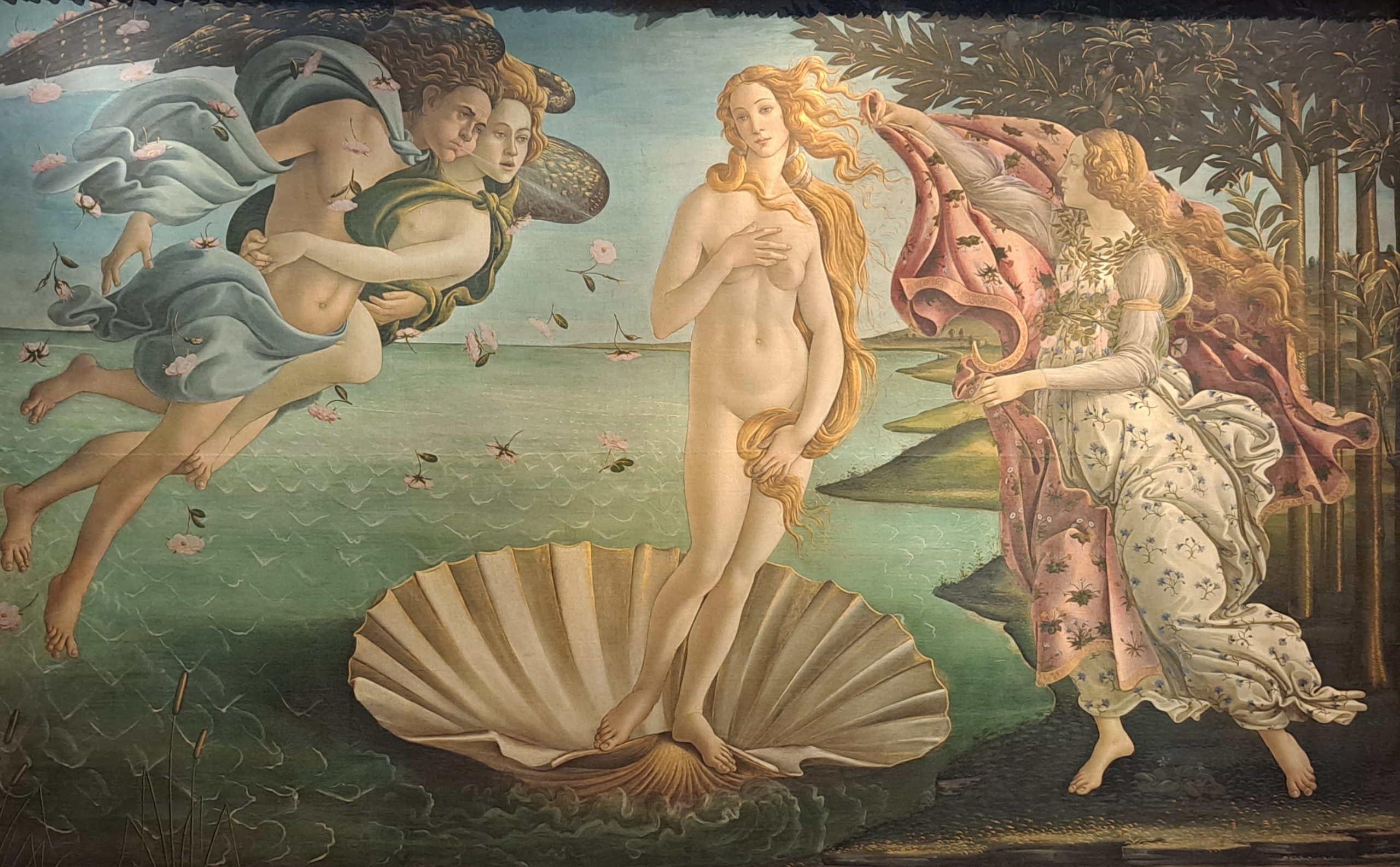 Going to Florence is always a good idea. Seeing the Uffizi Gallery with its renaissance masters is an essential part of any itinerary, housing; Sandro Botticelli (1445–1510), his teacher Fra Filippo Lippi (1406-1469), the younger contemporary genius Leonardo da Vinci (1452 – 1519) and next generation’s Michelangelo (1475–1564), to name but four.

As four is too much for one article, I will focus on one: Sandro Botticelli, born Alessandro di Mariano Filipepi. When younger, I, like so many others, loved Botticelli’s creations but never took sufficient time to really see or read them. A recent visit to the Uffizi Gallery granted me extra time to appreciate the sublime beauty of his paintings and to decipher his allegorical marvels.

Sandro Botticelli’s signature brushstroke is instantly recognisable. The “characters” in his paintings are generally wavey-haired beautiful women and men with perfect skin, flowing colourful robes, long straight noses that turn up slightly towards the end, and pointed and often dimpled chins. Equally recognisable is his rich use of symbolism that merits deciphering. Botticelli was a master storyteller, bringing to life the myths and tales of ancient Greece and making them powerfully relevant for the fifteenth century. His paintings are like poems that capture an instant yet resonate across the aeons. I was moved by three paintings in particular. The first two are the beautiful Birth of Venus (c. 1485) and Spring (c. 1480),which weave in the ancient Greek gods.The third is The Calumny of Apelles (c. 1495), which I found particularly interesting and relevant for our complex modern times. They each have lessons for us today.

The Birth of Venus (1485), inspired by Ovid’s Metamorphoses, written two millennia ago, is one of the most recognisable Renaissance paintings. The newly-born Venus, the goddess of love and beauty, stands on a giant scallop shell, naked, with her hands and hair protecting her modesty. The winds, Zephyr and Aura, blew her and the flying roses to the shore of Cyprus. The minor Greek goddess, Hora of Spring, holds out a cloak of flowers to welcome Venus, presumably to prepare her for and protect her from the world of man. The lush vegetation on the right made me think of the garden of Eden. The cloak I interpreted to be a statement of how mankind has fallen far from purity and that lives are driven by a fluctuating and often competing mix of material interests and higher values.

Presenting a nude woman as the central focus of the painting in the fifteenth century was a courageous and controversial break with tradition. It was also a nod to the perfection and appreciation of Greek classical sculpture. Plato argued over two millennia earlier that the contemplation of physical beauty helped viewers understand and appreciate spiritual beauty and lift their minds to the “realm of divine love”. Botticelli’s work is infused with Neo-Platonism, and The Birth of Venus an ode to Greek genius and appeals to the public to contemplate beauty and grow spiritually.

Spring (Primavera) is another allegory ripe with symbolism. Its narrative also builds on Greek mythology. In this “story in paint”, the two primary “characters” are Spring, in the flowery dress at the fore, and Venus, standing slightly back at the centre of the canvas.

On the right, Zephyrus, the blue-skinned god of the West Wind, breathes on the nymph Chloris, whom he loved, pursued and “caught”, and who looks at him in fear. She was transformed into Flora, the Greek goddess of Spring, who scatters flowers under the watchful eye of Venus. There is a balance between the forces of the material world of nature on the right (wind, nature) and the spirituality of the gods and graces on the left. The three Graces (Aglaea, Euphrosyne, and Thalia) dance on the left with Mercury, the messenger of the Greek gods. He dissipates the clouds with his staff to ensure the fruits of nature – oranges – are visible to all and that cupid can shoot his arrow of love.

The painting, much like Venus, is an ode to beauty and the richness of the world, marrying Neo-Platonism with spiritual Christianity. It arguably promotes the humanist ideal, echoing the culturally steeped worldview of the Medici family who ruled Florence at the time and supported Botticelli — of a positive humankind, confident in its abilities and sensitive to the needs of others. I find the painting and the questions it explores still relevant today: should society embrace this humanist philosophy more to help create the future we need? Should we revere nature as the source of life, inspired by the gods? It also warns of a darker side – the West Wind’s wrong type of divine love, given his conquest of Chloris.

The Calumny of Apellesis perhaps the most complex of the three paintings, communicating several stories. The one you immediately see is the ancient Greek story (by Apelles) being retold in renaissance paint. Reading it from right to left: King Midas, with donkey’s ears, is being advised by “Suspicion” (in green) and “Ignorance” (in light blue) in preparation for his kingly judgement. The innocent, barely clothed victim, feet crossed as if ready for crucifixion, is praying while being dragged by the hair by Calumny, representing Slander. Calumny, dressed in blue and white, carries a flaming torch to symbolise her passion and wrath.

King Midas needs to judge the man but looks down, refusing to see what is truly afoot. Fraud, Deception and Spite accompany Slander, as does Rancour (Envy), represented by the hooded man, who puts his hands in front of Midas’ face to block his vision. Repentance, in black, with hands crossed as if tied and hence helpless, looks at the naked truth on the left, who raises her eyes to heaven.

The message is clear – despite the naked truth being in the room, kings can be deaf and blind, both by others’ wiles or their own cowardice. With one focal point being the sword-bearing statue in the centre, Botticelli’s painting is arguably a declaration that words are at war: slander against truth. It is also a statement of how easy it is to heed untruths. How many of today’s leaders share Midas’ fate when deciding what is right?

This brings us to the second story –why Apelles originally painted a similar scene and why Botticelli and others recreated the narrative. Apelles had been slandered to Ptolemy around the second century BCE and was about to be executed. Fortunately, the truth finally came out, and Apelles was saved. The painting is a plea: ignore the lies, see the truth and take decisions wisely.

Botticelli is thought to have had several possible victims of slander that he wanted to defend in mind. One is the monk Girolamo Savonarola, a charismatic, polemical friar who preached against despotic rule and corruption, the excesses of richness and the exploitation of the poor. Savonarola called for the destruction of objects and art that were not sufficiently spiritual. Botticelli fell under his spell and carried some of his paintings to be burnt in public. The phrase “bonfire of vanities” stems from these fires of cultural destruction. How many of Botticelli’s pieces were lost under Savonarola’s influence is unclear. But the loss went beyond burnt creations. Botticelli’s art became more austere and religious, and his fame and favour dwindled. He died in poverty, eclipsed first by the younger Leonardo da Vinci and then forgotten as attention moved to the next generation’s Michelangelo. Only centuries later did admiration for Botticelli rekindle. As regards Savonarola, Botticelli’s painting didn’t save him from the wrath of the church that he criticised; the Dominican friar was hanged and burnt in Florence in 1498.

The message regarding the destruction of cultural heritage is timeless. Pressures from religious belief and politics have repeatedly driven cultural destruction to promote one self-interested vision of what is right over another, with the winner increasing their power and influence. History books and newspapers are full of evidence on the incessant destruction of cultural heritage across the ages and continents, driven by interests in accruing power and reflecting a fundamental disdain for others’ rights and realities (for the legacy of loss, see Noah Charney’s, The Museum of Lost Art).

The Calumny of Apelles itself is also a warning and reminder: that there are many actors using “untruths” – slander, suspicion, fraud, deception- pushing for wrong decisions, motivated by a passion for money and power, envy and spite. And decision-makers may decide to ignore the naked truth. Just think climate change, nature’s destruction, pollution and the many dimensions of social injustice.

Sandro Botticelli’s paintings are more than simply beautiful products of an astonishing talent and vision. They tell interesting and important stories, reminding us of the risks of our inner natures and the need to make an effort and invest in civilisation, balancing material interests and higher values. Go to the Uffizi Gallery and read the stories in paint. What will you take away from these and other paintings that reach out across history?