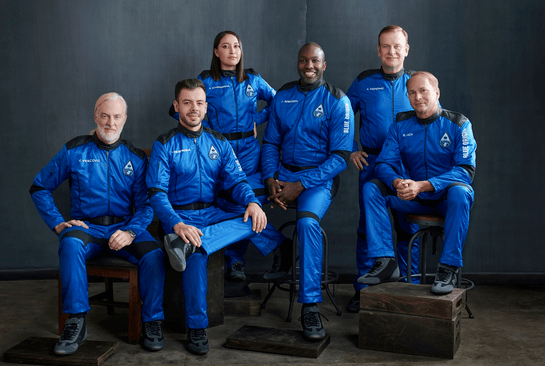 After a ten-minute flight, the capsule carrying the six passengers landed softly on a vast arid plain bathed in sunlight. Among the space tourists were also the second Brazilian to travel into space, Victor Correa Hespanha, as well as entrepreneurs Hamish Harding, Jaison Robinson, Victor Vescovo and Evan Dick. The latter had already participated in New Shepard’s third manned flight last December. The five are now the 623rd to 627th people to fly above the US-recognized altitude boundary of 50 miles (80 kilometers) separating Earth from space.

The flight included the first Mexican woman. Katya Echazarreta, born in Guadalajara, moved to the United States when she was seven years old. Echazarreta moved to the US at age seven, and was separated from her family for five years during the immigration process.

She won her sponsored seat through Space for Humanity’s Citizen Astronaut Program, a non-profit organization that seeks to expand access to space for all humanity among more than 7,000 candidates from more than 100 countries, with the intention of experiencing and sharing the “Perspective Effect”, that is, the moment when the shape of the Earth is observed firsthand while in orbit. At 26, she has also become the youngest American to go into space.

According to the magazine Space.com, all of Blue Origin’s passengers returned amazed by the experience of flying into space. “As soon as I looked at our planet, I had just a single tear running down my face and I didn’t even notice. I felt the wetness on my face and I touched it and I realized what was happening,” said Katya Echazarreta to Space.com.

I can assure you that nobody can truly imagine it until they experience it. Even now, just thinking back kind of makes my eyes teary

The capsule and its passengers were propelled by a launcher, which detached once its mission was accomplished and landed again on a runway, so that it could be used again. The capsule continued its trajectory until it passed the Karman line, at an altitude of 100 kilometers, which marks the boundary of space according to international convention.

Passengers were able to experience weightlessness for a few moments and see the curvature of the Earth through large portholes. The capsule then began a free fall back to Earth, slowed by three huge parachutes before gently touching the ground.

To see the complete curvature of the Earth and seeing the thin skin of the atmosphere of this beautiful, blue and brown planet that we have

The flight was originally scheduled for May 20th but was postponed after an anomaly was detected in the rocket. The company did not provide further details on this issue. Blue Origin’s own Jeff Bezos, Blue Origin’s principal shareholder, participated in New Shepard’s first manned flight in July 2021.

Since then, the craft has also carried the actor who played the iconic Captain Kirk from the Star Trek series, William Shatner, and Laura Shepard Churchley, daughter of the first American to go into space.

Blue Origin’s main competitor for this type of suborbital flight is Virgin Galactic, but since last July and the flight in which its founder, British Richard Branson, participated, this craft has remained on the ground for modifications.