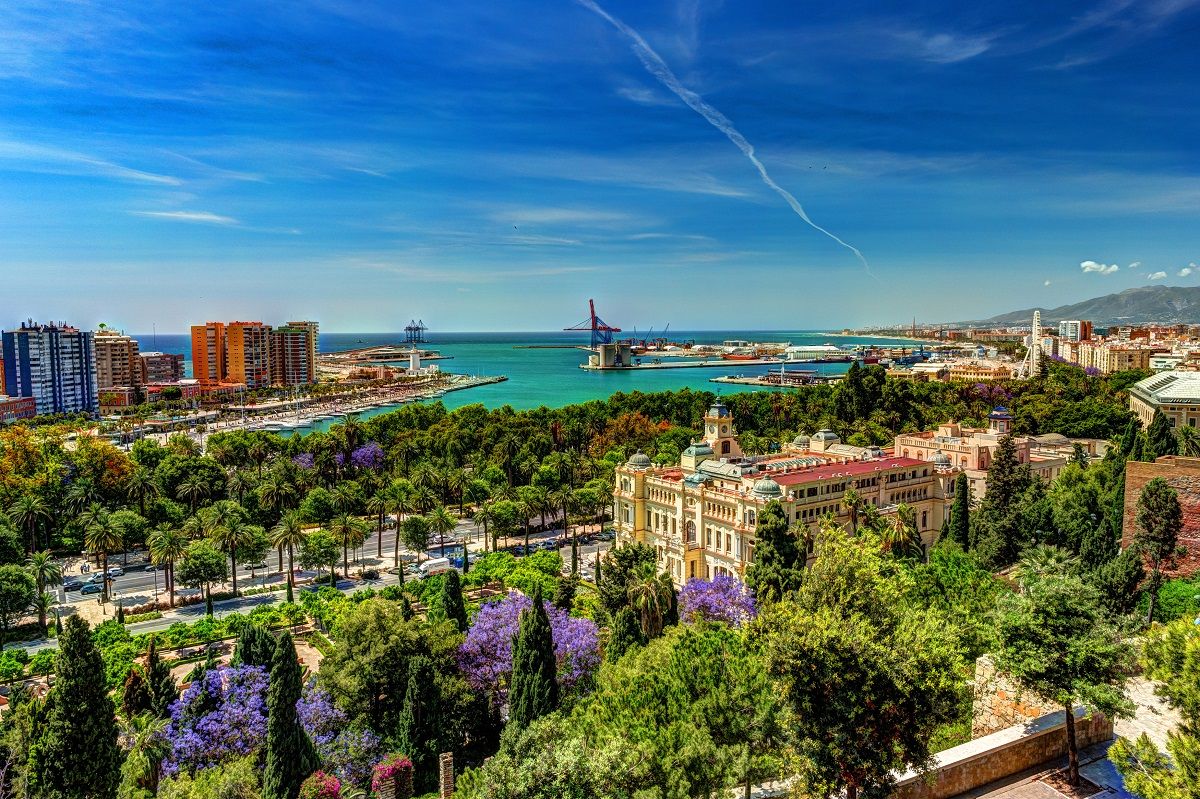 Once known as a sun, sea and sand destination, Málaga has made huge efforts in recent years to create a different type of tourism in the city. Named European Capital of Smart Tourism in 2020, this just goes to show how far the destination has come, and it is now an accessible, cultural and vibrant place. So here are some suggestions for how to spend 24 hours in this beautiful city.

In any city with a history, the Old Town is a great place to start. Spend some time exploring its combination of wide, grand streets and more narrow, classically beautiful ones. Sit with a café con leche and observe the bustling city, soaking up the atmosphere. Be sure to check out Plaza de la Constitución, Plaza de la Merced (the birthplace of Pablo Picasso way back in 1881) and the Catedral Nuestra Señora de la Encarnación by Plaza Obispo. There are also several monuments with centuries of history dotted throughout the city, so keep an eye out for these.

Be sure to visit the majestic Alcazaba fortress of the city. This Arab palace-fortress was built in the 11th century by King Badis of Granada and is perfectly adapted to the contours of the land. Located at the top of the hill, it is formed of two concentric spacee; the outer part on the lower level, and the palace in the inner part. This Castillo, built in the 14th century to house troops and protect the Alcazaba, is today one of the most visited monuments in the city. From its walls you can see spectacular views of the city and the Interpretation Centre explains the site’s history.

For another glimpse at Málaga’s history, visit its Roman Theatre, one of the remaining symbols of Roman Hispania in the city. There is also a modern interpretation centre which uses new technologies to present the life and customs of the time, and the it also now hosts performances after being returned to its original use.

Málaga has a great variety of restaurants and bars, ranging from a place to drink a beer and eat a quick tapa, to more sit-down restaurants such as El Pimpi, one of the city’s oldest and most-loved restaurants, which offers traditional Andalusian food with some added sophistication. Depending on your taste and your budget there are various options, but you are sure to find something that takes your fancy.

As the birthplace of Pablo Picasso, art plays a special role in the city and there are several galleries and art museums, however in recent years Málaga has reinvented itself as a cultural hub, adding museums for all tastes. So if art is not your thing, there are plenty of museums that cater for different interests. There’s the Pablo Picasso Museum, the Wine Museum, the Centre Pompidou, the Municipal Heritage Museum, the Centre of Interpretation of the Roman Theatre, the Holy Week Museum, the Málaga Football Club Museum…the list goes on, 37 museums in total. Additionally, Málaga’s Soho neighbourhood is home to street art from some of the world’s leading graffiti artists, so for something a bit different take a look around and spend some time discovering the amazing murals.

If you’re in need of a bit of a sit down, try one of Málaga’s many beautiful parks. Parque de Málaga is made up of three walkways and covers an area of 30,000 square metres. There is a rose garden and a variety of orange and cypress trees. The neighbouring gardens, Jardines de Puerta Oscura, are also lovely if you’re looking for a bit of refreshing greenery.

Málaga has 14 kilometres of beach, divided into 16 separate beaches. They are all easily reachable with plenty of facilities, so although there is plenty to do in the city, if you do just want to feel the sand between your toes, or sit and watch the soothing waves wash in and out along the shore, this is easy to do and there is a great variety of options to choose from.

A post shared by TRAVEL I MINDSET I INSPO (@essential.trips)

Málaga’s port is an exciting area, and although it has been in use since Phoenician times, it has been modernised recently. The stylish promenade is ideal for a stroll by the water, and the ‘Palm Garden of Surprises’ provides another lovely walking area. When you’re done admiring the port, head to nearby Paseo del Muelle Uno, a lively area filled with bars and restaurants on the way to the Málagueta beach. This is a nice spot for dinner and drinks, and you can look out over the water as night falls in Málaga.