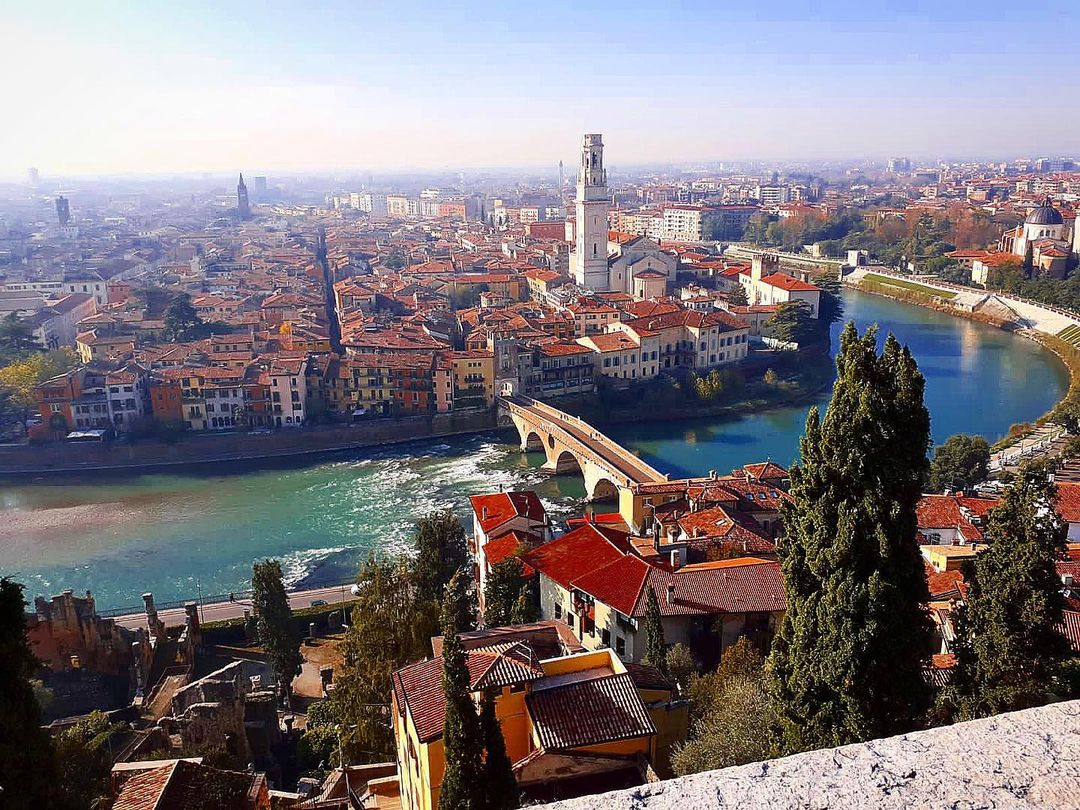 I am sure you’ve heard of Verona, the city of Romeo and Juliet! Located on the Adige River in Veneto, Italy, renowned for romance and the setting for two of William Shakespeare’s plays: The Two Gentlemen of Verona and of course Romeo and Juliet. The city is a declared UNESCO World Heritage Site because of its urban structure and architecture and it is a beautiful place to visit. So, here are 10 places to see and visit whilst you’re there.

Verona Arena was built in the first century and is reminiscent of the Colosseum in Rome. An impressive Roman amphitheater in Piazza Bra, it is still in use today and is a well-known international location for large-scale opera performances throughout duing the year. The arena’s capacity used to be nearly 30000 people but nowadays the available places are limited to a maximum of 15000. The building will be used for the closing ceremony of the 2026 Winter Olympics in Milan and Cortina d’Ampezzo.

Juliet House is one of the most visited places in Verona because of the love story of Romeo and Juliet. The house is supposedly the house where Juliet used to live and the balcony is where they declared their love to each other. Located at 23 Via Capello, the house is also featured in the 2010 movie Letters to Juliet, starringplayed by Amanda Seyfried and Vanessa Redgrave. A typical place to take a selfie with your loved one!

Piazza Bra is arguably the biggest and famous square in Verona. It is lined with numerous cafés and restaurants, along with several notable buildings and surrounded by beautiful buildings and architecture such as Verona Arena, The Gran Guardia, and The Palazzo Barbieri.People. Tourists like to gather here to enjoy their food and coffee after visiting the city.

Castelvecchio. meaning Old Castle in Italian, is one of the most prominent examples of Gothic architecture of the age, with imposing M-shaped merlons running along the castle and bridge walls. Today this castle is home to the Castelvecchio Museum and the local officer’s club which can be accessed through the left door on Corso Cavour. This is an ideal place to visit after your coffee break at Piazza Bra.

The Roman theater was built in the 1st century, and only a small portion of it remains today. Visitors can sit and enjoy the view of the city, whilst from the other side of the river you can admire the structure from a different angle. A must see if you’re interested in history or architecture.

The Torre dei Lamberti is an 84 m high tower in Verona. Built in 1172 the tower has two bells; the Marangona signals fires, work times, and the hours of the day, whilst the largest, Rengo, is used to call the population to arms or to invoke the city’s councils. You can go the top of the tower to see the impressive view of the city.

Giusti Palace and Garden are located in the east of Verona a short distance from Piazza Isolo and near the city center. The palace was built in the sixteenth century and the garden is considered to be one of the finest examples of an Italian sophisticated garden. Visitors can walk around enjoying both the garden and the beautiful view of the city. If you need to climb a short way to the top of the garden you’ll find the perfect spot to take some lovely photos.

An ancient fortress built atop the ruins of a viscount’s castle, this is certainly the place to visit in Verona and an amazing place in the city from which to enjoy the views. The best time is during the sunset when the city is really at its best against the sunset colors. Some of the buildings you will see from the San Pietro include Santa Sofia, San Leonardo, and the San Mattia Castles.  It is

This Romanesque basilica of San Zeno was constructed between 967-1398 AD and is one of the most important religious buildings in Verona, not just because of the architecture and the history but also because this place is known for being where Shakespeare’s Romeo and Juliet got married.

Piazza dei Signori is a square in Verona surrounded by many beautiful buildings, such as Palazzo Domus Nova, La Casa della Pietà, Loggia del Consiglio, Palazzo Cansignorio and plenty more. The square is dominated by the famous Clock Tower, and you can also find several restaurants and bars here.