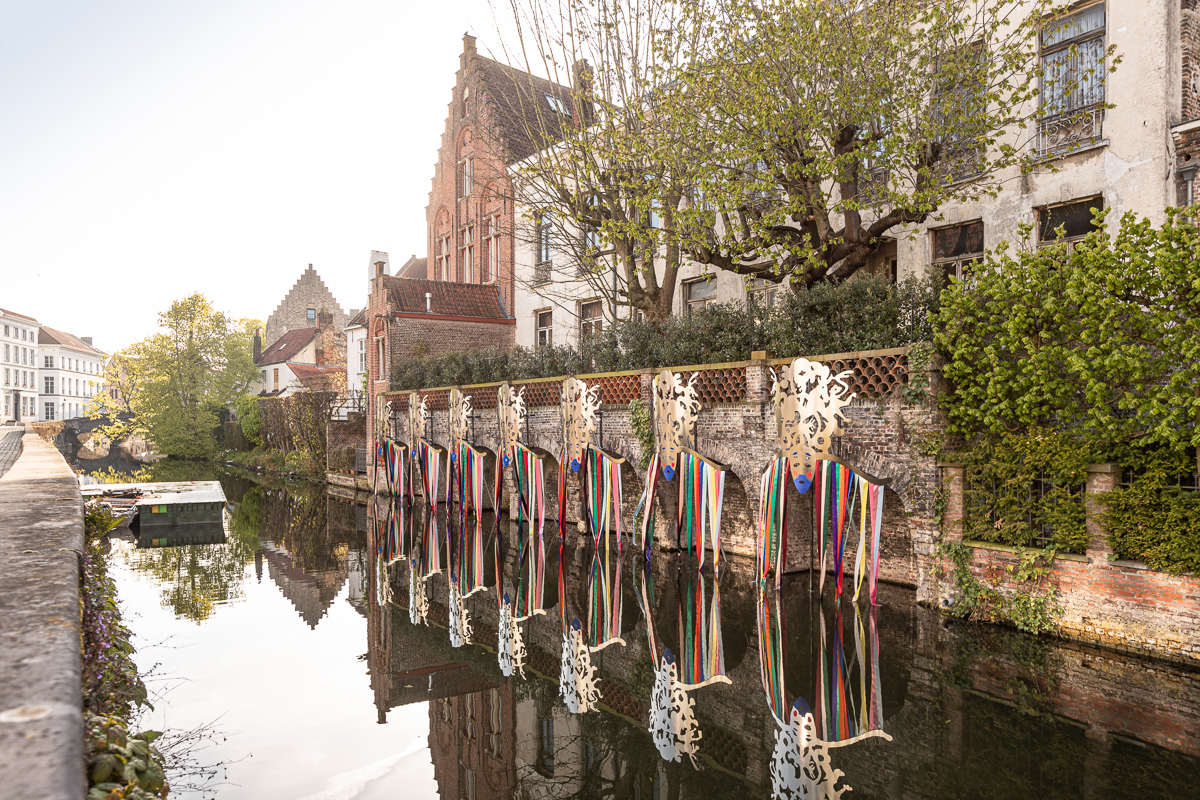 An international contemporary arts initiative in Bruges aims to provide a much-needed shot in the arm for the city’s tourist sector. Called “TraumA”, the event, which is free of charge, is being held in one of Belgium’s most historic cities but one which is only just recovering from the devastating impact of the pandemic.

The spectacle, much of it in the open, partly aims to showcase innovative art work by artists who have been largely unable to exhibit their work due to various restrictions caused by the crisis. The initiative specifically focuses on those areas of the city which are usually off the well beaten tourist trail. Organisers particularly hope that the art work produced by 13 national and international artists will show “another side” of the city to the traditional picture postcard one often portrayed in tourist guides. While the UNESCO-listed city is well known for its lace, chocolates and canals (it’s called the Venice of the North) tourists often don’t see those areas where much of the current artwork can be found.

The festival is the third and latest edition of Triennial Bruges, which is usually held every three years. The 2021 version offered 13 artists, mostly young, a free hand to come up with creations that would allow the city to offer something a bit different to the images usually seen on picture postcards. The art work is scattered around various public spaces in the city and can be visited free of charge. One example is a piece of art work produced by Gijs Van Vaerenbergh, one of three Belgian artists and architects taking part in the scheme. The Leuven-based artist has produced “Colonnade”, an installation composed of a series of inter-twining columns which create a maze-like space, and can be found in a small park on the outskirts of the city.

Closer to the ever-bustling city centre in Burg Square is art work by Nadia Kaabi-Linke, a Tunisian artist who lives and works in Berlin. She has created a circular installation of public benches that are rendered inaccessible by sharp pins on the surface. Another Belgian participant is Hans Op de Beeck, from Turnhout, who is exhibiting “Danse Macabre”, a 4metre-high full size merry-go-round whose features appear frozen in time. This can be found in Sint-Walburgakerk Church, said to be the most opulent and Baroque building in Bruges. Not to be outdone is one of Bruges’ own, Nadia Naveau who has placed her contribution to the event, gleaming masks bedecked with decorative patterns, along the waterfront of the Augustijnenrei. Like most of the locations hosting the various artworks, this too has its own tale to tell: it was dug out in the 12th century and its name alludes to the convent of St Augustine that stood here until the end of the 18h century.

Be warned: the artwork is not always in the most obvious of places – you will probably have to venture down quiet cobbled streets, along waterways or into places of worship to find it. The artists were selected by a team of curators, including Michel Dewilde from Ghent, who is the deputy curator of contemporary art at Musea Brugge. A good starting point to discover all the exhibits is the Poortersloge (Burgher’ Lodge) which dates to 1395 and where an exhibition, “A Porous City”, of 40 sculptures, photos and drawings is also being held. Ruth, based at Poortersloge, explained that, partly due to the impact of the pandemic, Triennial Bruges has been extended, from September 26 when it was due to end, until 24 October. It is hoped this will also enable it to benefit from people who visit the World Heritage city outside the current summer season.

We’ve had lots of visitors already, people from as far away as Brazil, the U.S and South Africa. One of the aims is to invite people to look at parts of Bruges that they might normally overlook. We also want people to look at the city in another way and to move off the main tourist trail and the window shopping. A lot of these artists could not show their works during the lockdowns so this is also a good opportunity for them.

She explained the meaning behind “TraumA”, the theme of this year’s event. The word is an amalgamation of “Traum”  which in German means dream, and “Raum”, meaning space. “The two words – dream and space – underpin what the 2021 event is all about,” she adds.

Triennial Bruges is a concept that was started back in 1968 when the city joined forces with the province of West Flanders to organise a summer event that would present an overview of contemporary Belgian art every three years. The idea then, and now, is to take art to the streets to reach as many people as possible. For a city that already attracts some five million people a year, it’s a great opportunity to “nuance and diversify the often overrated tourist image of Bruges,” says Philip Pierins, Alderman of tourism in Bruges.

We explicitly focus on the visitor who has and takes the time to discover the city. Anyone who makes the effort will not regret it because this art trail allows you to venture off the beaten track and discover places you never imagine existed.

Bruges Mayor Dirk De Fauw agrees, saying, “In a context of great uncertainty, Triennial Bruges 2021 is a first important step towards sustainable recovery (from the pandemic).” The various artistic installations are located in a “unique setting,” he said, adding, “Bruges and contemporary art are no longer taboo partly thanks to this initiative.”

As part of the event, 28 catering establishments, each located on or around the art trail, are taking part by offering specially selected dishes, often showcasing local products and producers. These include Niels Floreal, the 26-year-old owner of Den Dyver, a top class restaurant near the city centre. He says, “I fully endorse Triennial Brugge. It was so very sad to see Bruges during lockdown. It was like a ghost town. But now the horse drawn carriages and boats full of tourists are back which is great, not least for a Bruges born person like me.” Niels, designated a “Triennial Bruges Ambassador”, added, “My Triennial Brugge offering is cheese, all sourced locally. Belgium is not so well known for its cheeses but has some first class ones so I thought that an appropriate dish to promote.”

The art trail is best seen at leisure and, for anyone able to stay a night or two, an excellent spot to lay your head is Hotel Martin’s, ideally located just a stone’s throw from the city’s main square. A good way to get around this ever-busy city to see the various art exhibits is by bike and good value bike rental is available from Koffieboontje. On the way, stop off at Blackbird, a pleasant little café close to Poortersloge for a light lunch. While in this splendid city, it’s well worth paying a visit to other places of interest such as Sint-Janshospitaal, one of the oldest in Europe, dating to the 12th century, and Groeningemuseum which houses six centuries of Belgian visual arts.

Triennial Bruges is said to tread a “fine line” between dream and trauma (hence the theme) with works located at lesser known or less obvious locations. Even for those who may not normally consider themselves particular art lovers, this unique and innovative event is well worth checking out. And, with the festival now being extended well into the autumn, you still have plenty of time to experience it for yourself.