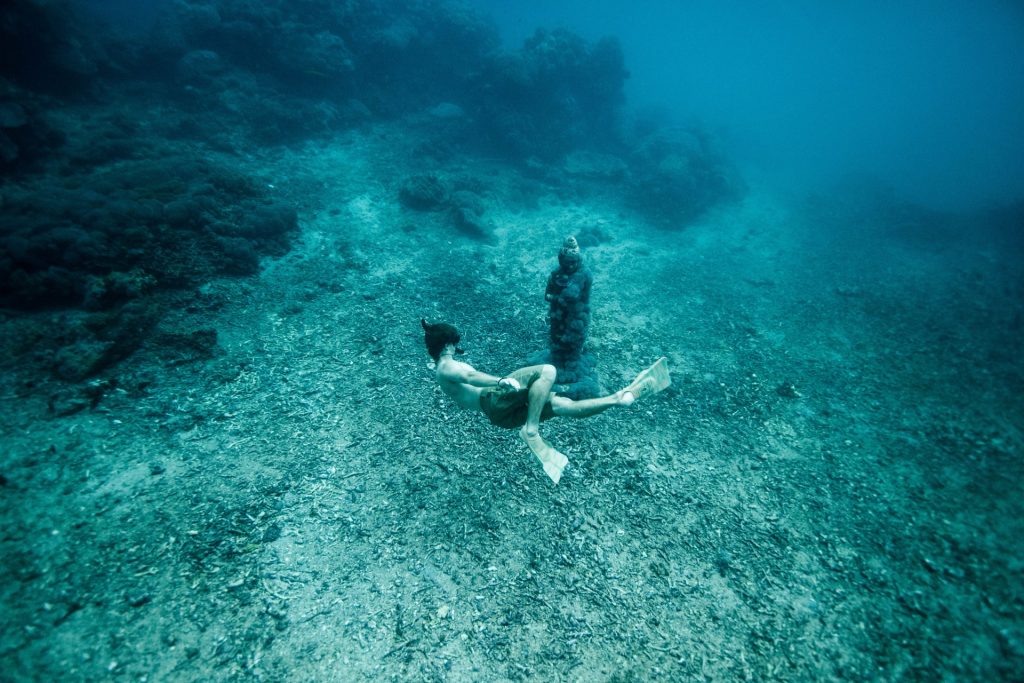 Explore archaeological ruins and contemporary art at these 5 amazing underwater museums dispersed around the World. Most of them do not require a diving certification!

The MUSA is an underwater contemporary art museum that hosts more than 500 permanent monumental sculpted figures based on real people. These statues are gathered 10 meters below the sea’s surface in the waters surrounding Cancun, Isla Mujeres, and Punta Nizuc.

The museum was founded in 2009 by Jaime González Cano, Director of the National Marine Park, Roberto Díaz Abraham, President of the Cancun Nautical Association, and by the English sculptor Jason deCaires Taylor.

The exposition aims to demonstrate the correlation between science and art and to promote coral life. On one side, the sculptures constitute a museum; on the other side, they form a reef structure that attracts marine life and encourage the growth of coral. All sculptures are made from specialized materials and are tethered to the seabed.

The underwater museum can be visited in different modalities: through glass-bottomed boats, by snorkeling or diving.  Excursions and tours are organized both during the day or during the night. The MUSA attracts every year more than 750,000 divers.

The Museo Atlántico opened in 2016 and was inspired by the Mexican MUSA. It is the first underwater contemporary art museum in Europe, hosting almost 300 different sculptures and covering an area of 2,500-square meters. The statues are all designed by British artist Jason de Caires Taylor and are situated 12 meters below the sea level in the waters near the south coast of Lanzarote, in the Bahía de Las Coloradas.

The goal of the exhibition is to raise awareness on environmental and climate change issues as well as to create a marine habitat for the Canary Islands. The museum can be visited with the help of dive instructors. Everyone can have the opportunity to visit this wonderful underwater museum, from professional divers to beginners without a diving license.

The Baia Underwater Park is located only a few kilometers north of Naples, near Pozzuoli.

The museum hosts the ruins of what was once an elegant and chic seaside resort for rich Romans… Even emperor Caligula used to go there! The city was abandoned in the 8th century and then submerged underwater. Today, it is still possible to admire amazing marble sculptures and touch the mosaic floors. The underwater archaeological park of Baia counts 5 main scuba diving sites: “Portus Julius”, “Secca delle fumose”, “Ninfeo di Claudio”, “Villa dei Pisoni” and “Villa a Protiro”.

“Ninfeo di Claudio” is surely the best site. There, it is possible to admire a 200-meter paved road, steam baths foundations and the beautiful statues of the nymphaeum.

Also “Villa a Protiro” is worth a dive! It is an ancient Roman villa with a courtyard with a large black and white geometrical mosaic floor. The original mosaic is still there underwater, perfectly preserved.

To see the ruins, visitors can book a tour with a glass-bottomed boat. There are also snorkeling excursions, and SCUBA diving experiences with the guidance of local instructors.

However, the statues are all copies as the original ones are protected in the archaeological museum of the Castle of Baia, located above the dive site.

In the past, Herod was a city that served as a trade port for the Roman Empire. It was once the largest port of the Roman Empire, inaugurated in 10 BCE. The port was named “Herod’s Harbor” because Caesarea was built by Herod on the ruins of a Phoenician town called Straton’s Tower.

Now Herod’s Harbor lies 20 feet below the sea level off the coast of Caesarea, Israel. The museum was opened on 2006 and hosts 36 different exhibits along 4 marked trails. In each of them it is possible to admire numerous artifacts, such as marble columns, anchors, pedestals, original foundations, and shipwrecks from Phoenician and Byzantine eras.

One trail is accessible to professional snorkelers, while the remaining three trails are all designed for beginning divers. Visitors are also given a water-proof map.

The Baiheliang (literally the “White Crane Ridge”) is an archaeological site located in Fuling, China, which opened in May 2009. The museum is submerged under 43 meters water of the Three Gorges Dam on the Yangtze River.

Baiheliang museum hosts some of the oldest hydrological inscriptions of the world. The natural stone ridge has a length of 1,600 meters and an average width of 15 meters. It records 1,200 years of changes in the water level of the Yangtze River, as well as positions and titles from the Tang Dynasty (618-907) onwards. The stone’s carvings include poems in calligraphic writing, three Bodhisattva carvings, 18 fishes and a crane.

Before the Three Gorges Dam was built, the rock ridge was submerged in summer and autumn. In winter, every 3/5 years, when the water level of the Yangtze dropped, the ridge and its carvings were exposed.

This museum is the only one of this list that can be visited by non-diving visitor. Indeed, there are two underwater channels with very long escalators that enable visitors to descend and view the illuminated inscriptions through double-glass protection windows.