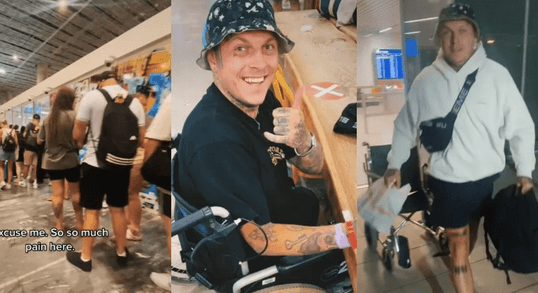 TikTok users with thousands of followers have recently sparked a huge controversy after uploading videos where they advise people to request a wheelchair at the airport to avoid the long waiting queues.

These days many international airports are overcrowded with tourists. They have reported an increase in passengers needing wheelchairs and priority passes prior to a trip. This put the TikTok influencers in the spotlight.

Heathrow (London airport) CEO John Holland-Kaye accused “tiktokers” of encouraging tourists to feign disabilities in order to quickly board or get off a plane, the UK’s Daily Mail reported. This practice has caused indignation, especially among passengers who really needed the priority.

According to the Daily Mail one user complained saying, “Imagine pretending to need a wheelchair. My son actually needs a wheelchair and it’s not something anybody should be pretending about.” Hair.By Shell wrote: ‘I’m all for a laugh but my terminally ill dad couldn’t get a wheelchair at the airport because of people doing this – not cool at all.’

I’ve personally seen people start to fake an injury and need a wheelchair just to get through the line because you have to go up to the very front.

Passengers who need assistance and priority are transported directly to their boarding gate through the Fast Track. Where the procedures are expedited and they arrive quickly through an electric buggy.

The Birmingham airport assured that there was a 20% increase in the number of people who needed assistance for their trips. In addition, they had to buy more wheelchairs and hire extra staff to push them.

One Tik tok influencer called Wolf Jenkins pretended to hurt his leg to get through security faster. In addition, he shared with the rest of his viewers the step-by-step of how he did it. He advised finding a wheelchair at the airport and asking the assistance staff to help him bypass the lines at check-in and security in front of the rest of the people. This would allow him to board the plane before the other passengers.

The Daily Mail reported that a flight attendant called Cierra Huffman, who uses the username Cierra_Mistt, told her millions of followers in a now deleted video, “Here’s how you avoid all lines not only in security but also in restaurant, bars and even on the jet bridge to get onto your flight.”

When arriving at the destination, he recommended doing the same to avoid the lines to get the luggage and get off the plane quickly. This practice went viral and was reproduced by different tourists who followed “the strategy” to board their trips, as confirmed by airport authorities. While many others qualified this attitude as disrespectful to those who really need to have wheelchairs or assistance.