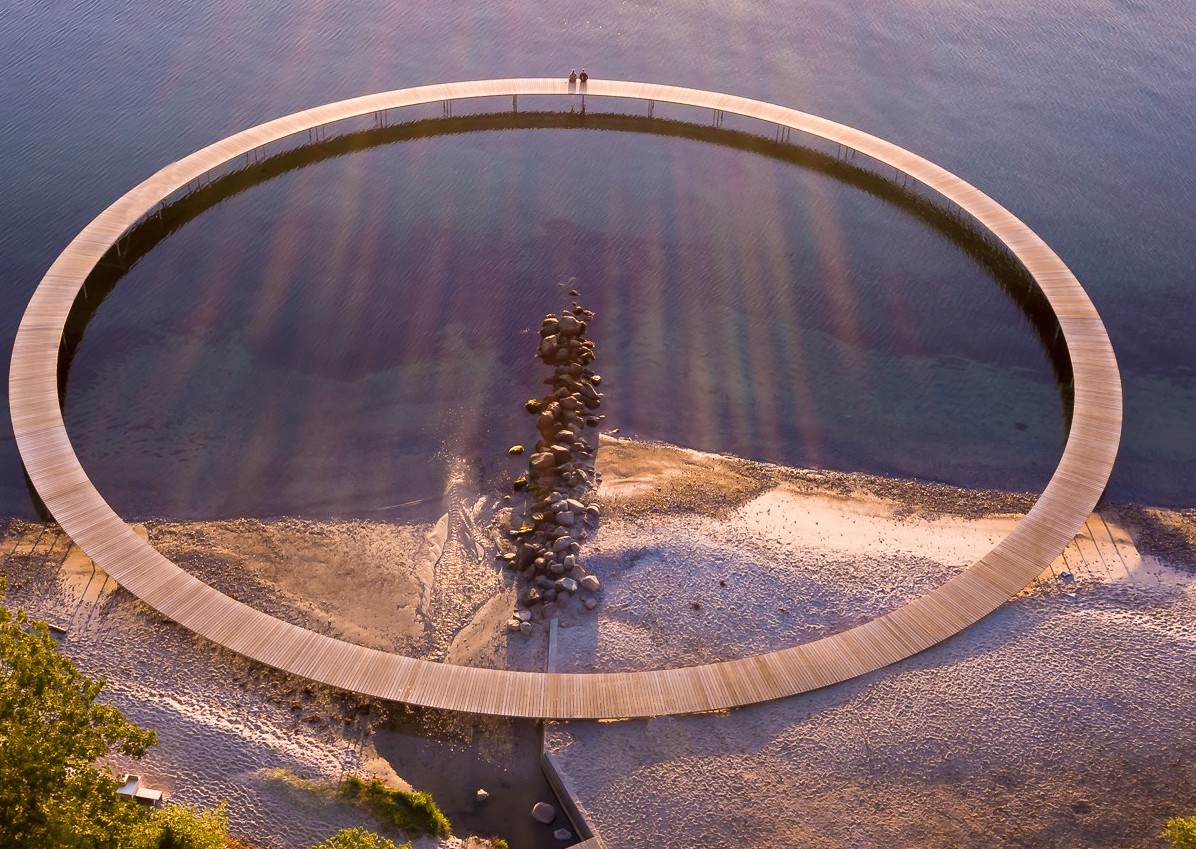 Bridges are not just structures to connect point A to point B. They are also art pieces with a unique design that enriches the surrounding landscape. And many of them have become popular tourist attractions thanks to their weird shape and design. Here are our top 5 unusual bridges in the world!

The Murinsel is an island and a bridge on the Mur river. The complex is located in the city of Graz, Austria. The Murinsel was designed by the American architect Vito Acconci, in occasion of the preparations for the appointment of Graz as European Capital of Culture in 2003. The complex can be considered both a bridge and an island. The bridge connects the two banks of the Mur river, but it includes also an artificial island with a particular twisted shape forming a sort of seashell. The island hosts a café, a kids’ playground, and an amphitheater. The Murinsel, which originally was intended as a temporary project, has become a popular landmark which attracts numerous tourists to Graz.

This knot-shaped bridge is actually formed by three different bridges woven together into a single structure, hence the name. The 185-meter-long pedestrian bridge crosses the Dragon King Harbour River in the Chinese city of Changsha. It was designed by NEXT architects, an international architecture firm based in Amsterdam. To design the Lucky Knote, the architects took inspiration from the principle of the Mobius ring and from the traditional Chinese art of knotting. The bridge includes three footpaths that connect two parks. From the bridge, it is possible to enjoy a stunning view of the surrounding landscape, which includes the river, the Meixi lake, the mountains and the huge city of Changsha. The bridge was completed in 2016.

The Dragon Bridge is a 666-meter-long bridge located in the city of Da Nang. The steel bridge over the river Han has the shape of a huge dragon, a symbol of power in Asia. But what is really astonishing is the fact that the dragon literally breathes fire and water from its mouth! The show takes place during the weekend and festivities at 9 p.m. The show is made even more amazing by the 2,500 LED lights which illuminate the entire bridge, creating a dazzling light show.

Unveiled in 2008, Henderson Waves is a pedestrian bridge which has become an iconic landmark of Singapore’s skyline. As the name suggests, it is characterized by an undulating shape of a wave curving and twisting. The structure has been built using steel and Balau wood, a hardwood which can only be found in Southeast Asia. The bridge is about 275 meters long and 36 meters above the ground, a height which makes it Singapore’s tallest pedestrian bridge. The huge bridge links Mount Faber Park with Telok Blangah Hill Park. Every night from 7 pm to 2 pm, the waves of the bridge are illuminated with LED lights.

The Infinite Bridge is a never-ending circular street that spans from the shore out to the sea. It was designed by the Danish architect Niels Povlsgaard and Johan Gjødes in occasion of the festival “Sculpture by the Sea 2015”, aiming to celebrate the coastal landscape of the city of Aarhus, Denmark. The circular wooden bridge has a diameter of around 60 meters. From this amazing architecture, it is possible to enjoy a 360-degree view of different landscapes, from the port city to the beach to the forest. The bridge is set up from April until October.