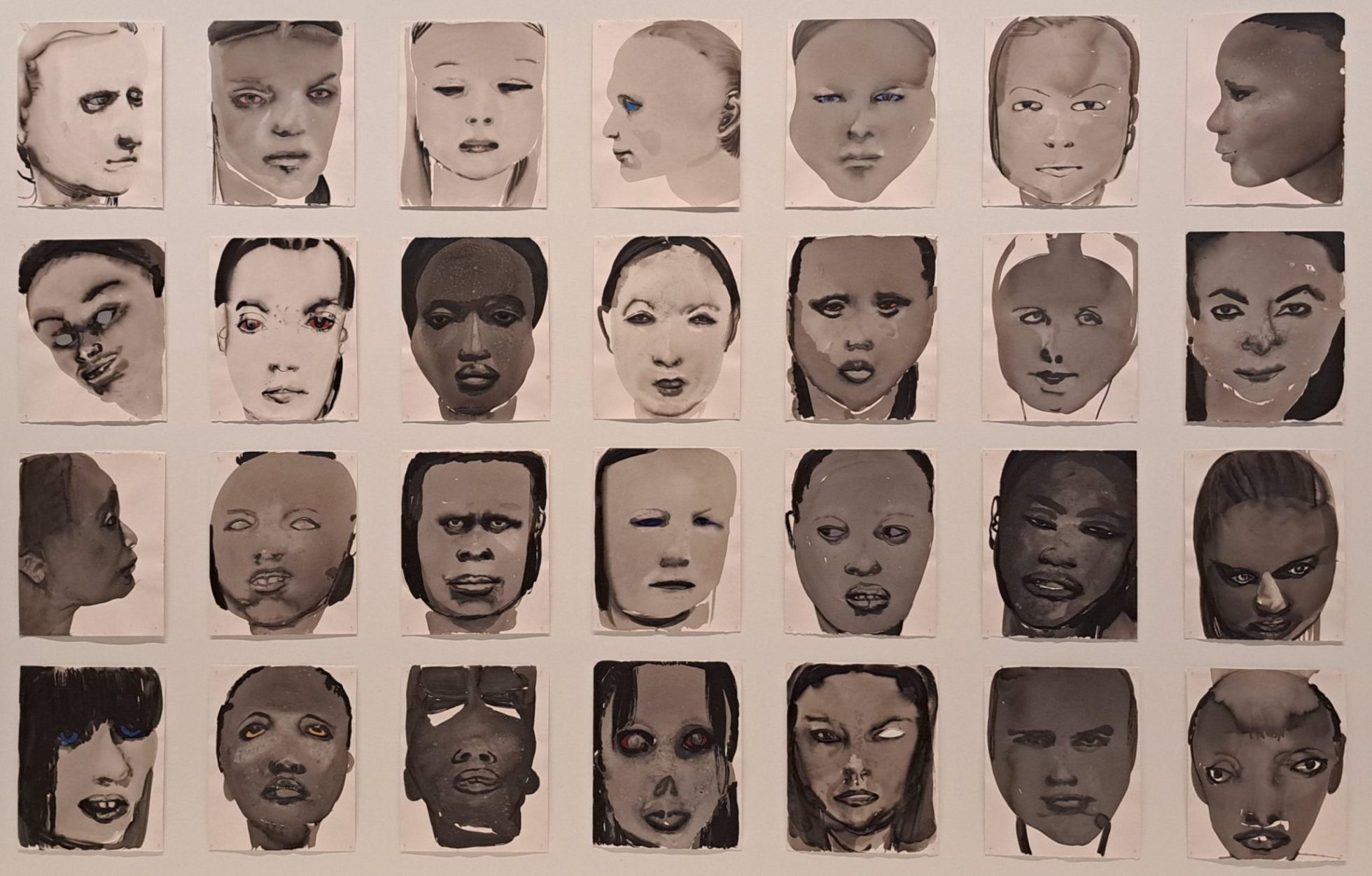 Marlene Dumas’ portraits at the Palazzo Grassi in Venice must be seen by anyone who dreams of capturing character on paper or canvas. They are a masterclass of magic – she gets paints and inks to flow and settle and express every emotion and somehow manifest characters in a way that makes them, well, them, in their contemplation, in their agony. The painting is light-touched, but the emotions are real, sometimes painfully raw.

We see the famous in a new light, cast in black and white ink. The portraits are far from picture-perfect,  air-brushed photos, and a pedantic academic portraitist could easily find physiological flaws. But they are perfect, not despite the “flaws”, but somehow because of them. They are powerful homages.

First, Alan Turing, the mathematical genius whose work deciphering the enigma machine was a glory for Britain and his death a soul-wrenching calamity of blind and woefully prejudiced “justice” casting a shadow over the country and those alien times. Yet we see neither of these extremes, just a contemplative soul who calmly stares out at us, keeping his secrets, with the slightest knowing smile. Then there is Marlin Brando’s sideways gaze, proud nose and fleshy lips, which capture the power of his youth and Hollywood. It is him, a momentary snapshot of an icon forever present. Next, Pedro Almodóvar, the Spanish film producer and creative giant, looks out at us with all-observing eyes.

Face after famous face stare out at us, a short factual statement describing one aspect of them. Their presence demands we look more into who they were, what they contributed to the world we live in.

Marlene Dumas does far more than capture the famous. She captures, over and over, a moment’s thought, a glance, an expression in her anonymous but symbolic palette of humanity. While the portraits of the famous were of men, these are mainly nameless women. Interestingly, the named men represent themselves while these women (and perhaps men) represent a greater part of the world, counting for more than the single momentary genius. By not crystallising around a name, manifesting an individual, they are universal, representing all of us somehow, ironically, more than the well-known.

The South African artist also paints in colour, evoking troubling  emotions that make us wonder who these people were, what they were thinking, and what past led to their faces expressing so much. Who was the blond woman with small blue unfocused eyes, stubbornly pursed lips and resolute chin? And the clear-eyed, flushed woman with the smeared and almost blood-stained lips who stares unflinchingly, focused, anchoring us to her gaze? Both are translucid as if fading from the present, ghosts of themselves. Perhaps this is Marlene Dumas’ modesty, or her subtle way of acknowledging that she was only capturing a glimpse of their souls.

She also paints political and social-reality paintings – of a child eclipsed by towering walls cutting societies in two, of the women’s harsh existence and impossible choices or lack of choices, of the power and imbalanced power game of sex, of racism and blind suffering, the latter as communicated by the harrowing painting below. This naturally evokes the apartheid and an ugly chapter of history that we should not forget. All who behold the paintings should use the outrage to fight against blind discrimination. A difficult hope in the current times of war and prejudice and pain.

Yes, her work can be brutal and honest, and some sexual paintings are not for all audiences. But her work can also be delicate and speak to all of us. It can have poetry in its light touch and also cry out starkly.

One painting haunts me – her SEE NO EVIL painting with the three girls in pink and yellow dresses, but black-lined, staring eyes, and the blackened upside down mirror of them, the colour seeped out of youth. Only darkness remains. I don’t know what Marlene Dumas wanted to invoke in us viewers, but I was left thinking that we live in a world where innocence is lost, and even the kids know it.

We really should see and recognise evil. It is tempting to conclude that we are running out of hope. Then I think of Marlene Dumas’ homage to the specific genius and her homage to the universal unnamed, each with their emotions and rich private realities. There is a contrast between the risks of dark times, the dreams and human potential, and those that manage amazing creation. Diamonds can be forged in our complicated reality and shine for all of us. Throughout history, great art has emerged during dark times, speaking honestly of the trials we face, but also bringing hope.

Marlene Dumas’ intriguing but disturbing open-end exhibition runs until the 8th of January 2023.