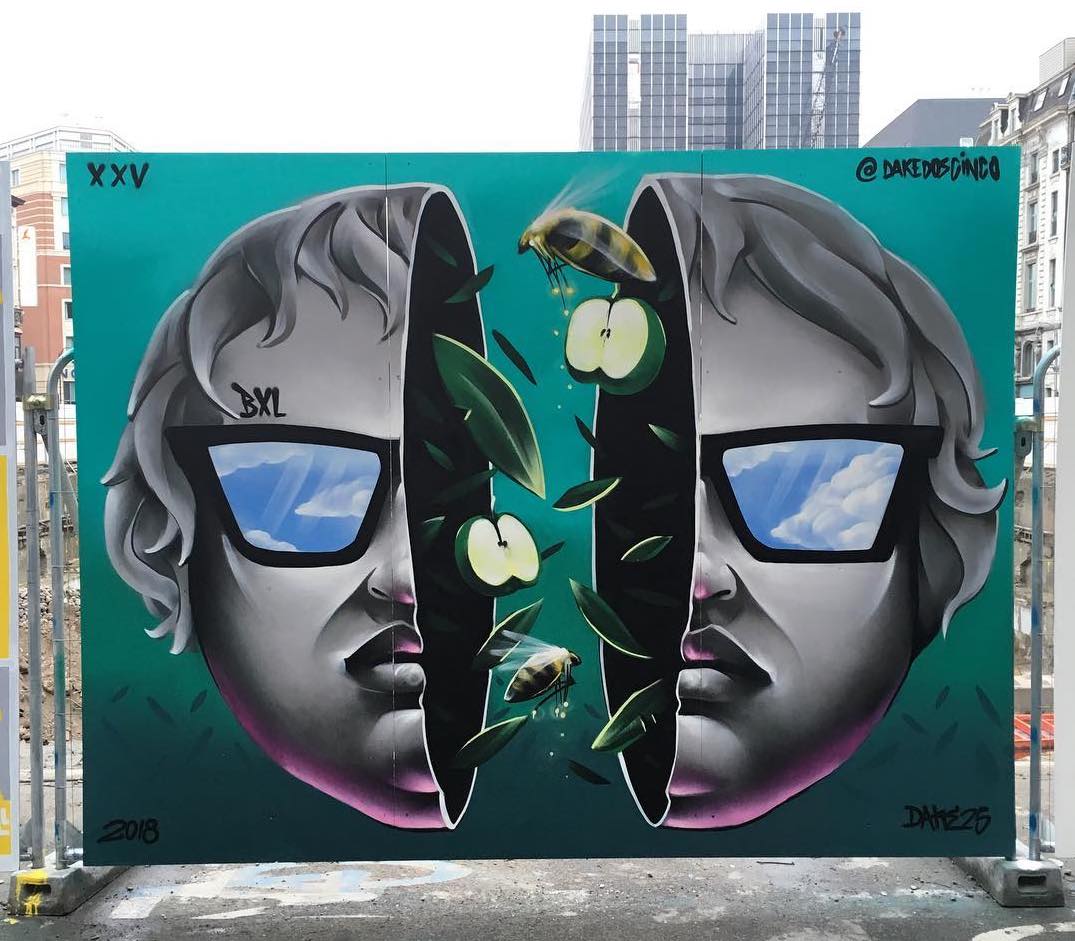 Brussels is a cosmopolitan and international city, where art can be found in the most unexpected places. With all its colorful murals, graffiti and frescos, Brussels is basically an open-air art gallery. The artworks cover walls, façades, shop fronts, lamp posts and benches all around the city. They are painted using different techniques and are centered on different themes. As there are hundreds of beautiful artworks, it is basically impossible to list all of them. Here we have listed for you our top 5 murals in the Capital of Europe.

The Manneken Peace is a representation of the famous peeing statue Manneken Pis dressed in a hip-hop outfit. The 12-meter-high artwork is placed right a few meters away from the actual Manneken Pis, on the façade of the former Maison du Folklore, a building that houses the wardrobe of the Manneken Pis since 2017.
The murals, colored with bright tones, represent two branches of art: hip hop and street art. The fresco was painted by the artist HMI, who is a member of the Brussels CNN group, a famous group of Belgian hip-hop artists.

This huge mural (400m²) shows 3 figures: a mother, her little baby and her daughter. To paint this piece of art, the artist worked for about 10 days and used more than 150 liters of paint. The fresco was created under the artistic direction of the non-profit organization “Une ville en couleur” (“A city in color”). The mother and daughter are wearing a crown of leaves and flowers and have their faces in the shadow. While the mother keeps her eyes on the baby, the girl is watching the viewer directly.

3. Manneken mural for the “9 visions of Brussels” project

This mural is one of the winners of the “9 visions” project. The project was launched in 2018 and focused on one theme: “BXL bouge pour vous, avec vous et grâce à vous”, menaing “BXL moves for you, with you and thanks to you.” The aim of the project was to showcase Brussels as a vibrant, creative, modern and smart city that is constantly evolving. The mural shows the head of the Manneken Pis cut in half and wearing modern sunglasses. In the middle of the mural, the artist painted Magritte’s apple cut in half and floating between green leaves and bees. The bees are a central theme in this urban artwork as the author wanted to draw attention to their disappearance.

This monumental urban artwork expands on three walls: it has a height of 24 m and a width of about 14 m. The mural was created to celebrate the Tour de France race, which was hosted in Brussels in July 2019 for two days. The artwork includes a plethora of elements, including the two famous cyclists Eddy Merckx – champion of the Tour de France – and Yvonne Reynders – a Belgian cyclist who won a dozen championships back in the 1960s. The background of the fresco features colorful (mostly yellow, orange, red and blue) dynamic lines evoking speed, curves and mountains.

These five murals are only a small sample of the numerous artworks that can be found around the city. To discover more about Brussels’ street art, visit the Parcours Street Art website.