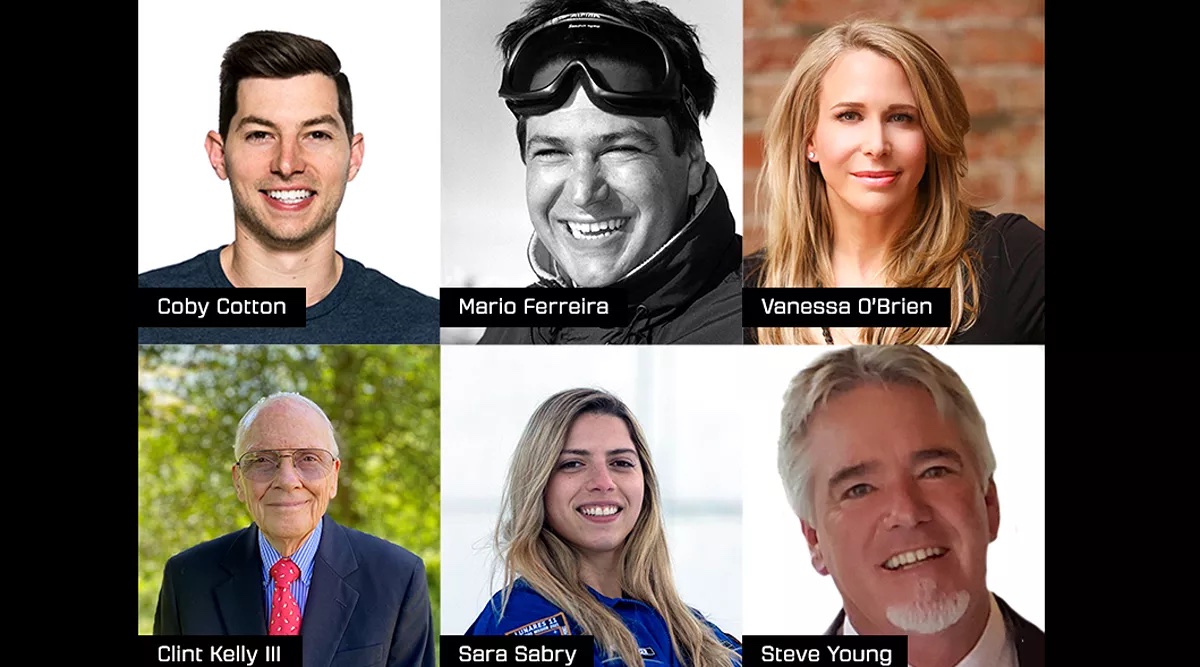 Each astronaut will carry a postcard to space on behalf of Blue Origin’s foundation, Club for the Future, whose Postcards to Space program gives students access to space on Blue Origin’s rockets. The Club’s mission is to inspire future generations to pursue careers in STEM (Science, technology, engineering and mathematics) for the benefit of Earth.

This mission will be the sixth human flight for the New Shepard program, the third flight this year, and the 22nd in its history. The flight date will be announced soon.

Coby is one of the five cofounders of the YouTube channel Dude Perfect, the most-subscribed sports channel on YouTube and one of the most popular in the world with more than 57 million followers. He co-founded the sports entertainment channel known for specializing in trick shots and comedy videos in 2009 with his college roommates Garrett Hilbert, Tyler Toney, Cody Jones, and his brother, Cory Cotton.

Coby’s seat is sponsored by MoonDAO, whose mission is to decentralize access to space exploration. MoonDAO members voted to have Coby represent them on this flight.

Mário is a Portuguese entrepreneur, investor and President of Pluris Investments Group, which includes more than 40 companies spanning tourism, media (TV and radio), real estate, insurance and renewable energy. A passionate adventurer, Mário raced the Dakar, the world’s most difficult car rally, in 2007, ran the London Marathon in 2010, and has been a scuba diver since he was 20. In 2003, Mário was decorated by the President of Portugal with the title of “Comendador”.

Vanessa is a British-American explorer. Following NS-22, Vanessa will become the first woman to reach extremes on land, sea and air, completing the Explorers’ Extreme Trifecta, a Guinness World Record. Vanessa will become the first woman to reach the Earth’s highest peak (Mt. Everest), its deepest (Challenger Deep) and cross the Kármán line, the internationally recognized boundary of space. She is an advocate for climate change and a champion for women’s equality and education, carrying the UN Women’s flag to the summit of K2.

Clint managed research and technology programs focused primarily on computer science and robotics while in government and in industry. In 1984, he started the Autonomous Land Vehicle project while at the Defense Advanced Research Projects Agency (DARPA) and is credited with starting the development of the technology base leading to today’s driverless cars. He and his wife have photographed wildlife on every continent from the High Arctic to Antarctica with an emphasis on big cats, polar bears and all 21 species of penguins.

Sara is an Egyptian mechanical and biomedical engineer and founder of Deep Space Initiative (DSI), a non-profit aiming to increase accessibility for space research. She became Egypt’s first female analogue astronaut in 2021 after completing a two-week Moon mission simulating the extreme conditions astronauts experience in orbital space. Sara earned her bachelor’s degree in mechanical engineering at the American University in Cairo and a master’s in biomedical engineering from the Politecnico di Milano. She is currently pursuing a PhD in aerospace sciences with a focus on space suit design. Sara is fluent in Arabic, French and English and currently resides in Berlin.

Sara’s seat is sponsored by Space for Humanity (S4H), a non-profit whose mission is to expand access to space for all of humanity. S4H also sponsored NS-21 astronaut Katya Echazarreta’s seat.

Steve is the former CEO of Young’s Communications LLC (Y-COM), the largest telecommunications contractor in the state of Florida under his leadership from 1992 to 2021. An avid fisherman, Steve serves as Governor of the Board at Eau Gallie Yacht Club and Committee Member of the Space Coast Coastal Conservation Association (CCA). He is also a large community contributor through Trinity Group, his giving foundation, and owns Pineapples, a new restaurant in Melbourne, Florida.