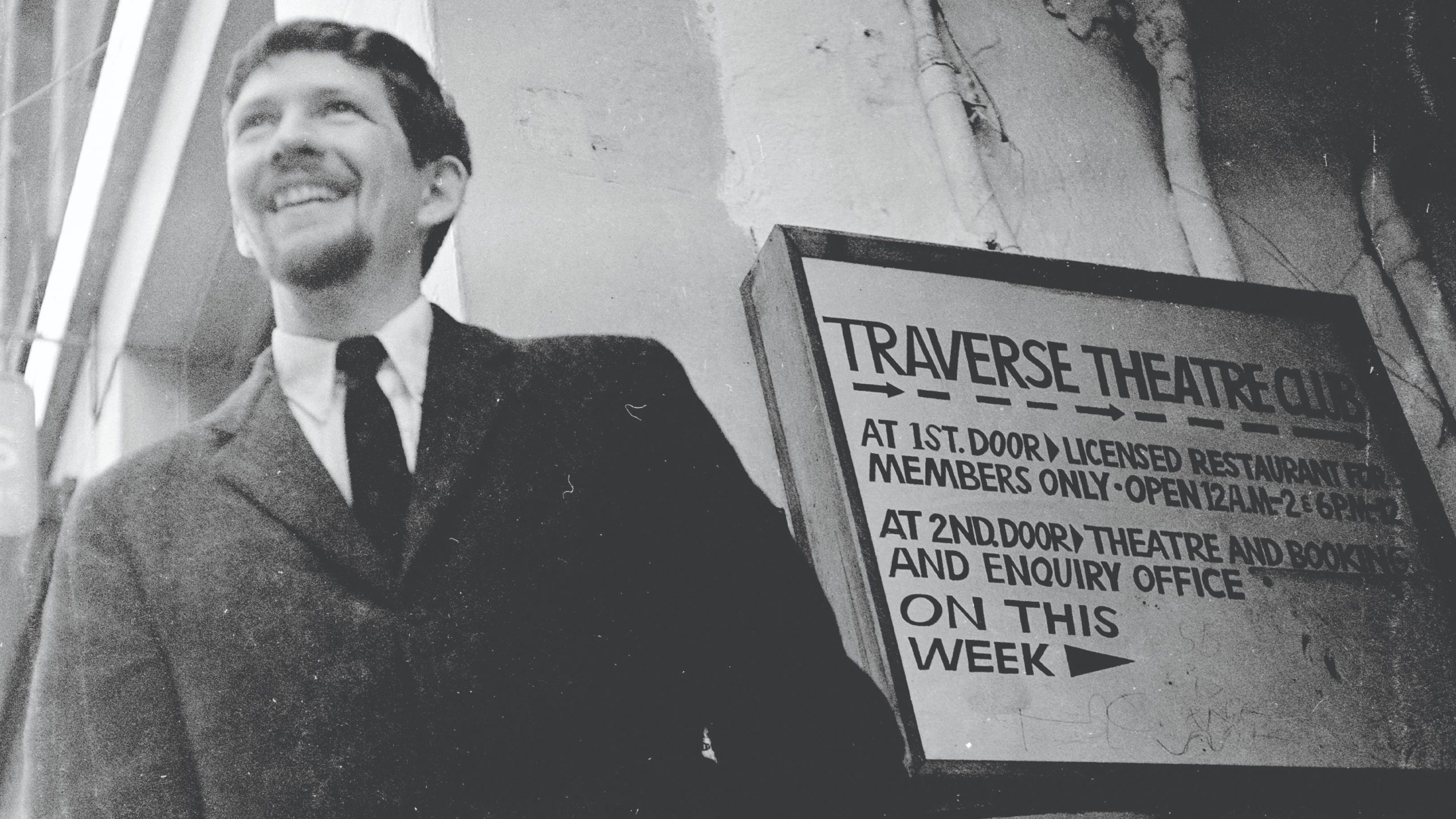 Around the year 2000, I was working as a gopher for a comedy and music club in Paris. Shows took place on the banks of Canal St Martin, later made famous by the film Amélie, under the round lightwell among red banquettes in the dark backroom of a legendary venue (and now trendy restaurant), the Hotel du Nord. I met some of the brightest and best English-speaking comedians in the world: Rich Hall, Ed Byrne, Dara O’Brien, Johnny Vegas. But little did I know, the real star was a regular who came to sit in the audience. He would shuffle up to the ticket desk, a twinkle in his eye, tufty moustache twitching and I’d let him in (access was something he had probably never been refused). Occasionally he’d hang around and chat, pineapple juice in hand, maybe telling stories of his favourite places in Havana.

I eventually learned that this humble gent was none other than Jim Haynes, counter-culture hero and icon of the Edinburgh, London and Paris scenes. I’d read about his open house Sunday supper club where anyone who could secure a word-of-mouth invitation was welcome, in return for a small donation to the kitty. I went along twice and, perched on the staircase in his mews atelier at 83 rue de la Tombe Issoire, ate spaghetti Bolognese or chilli – I don’t really remember, because the food was not the point. Gathered under Jim’s roof on any given Sunday afternoon were some of the most creative and eccentric people in Paris, and the world. Of course, I was too young and stupid to pay attention and realise whose company I was in, but that obliviousness was also thanks to Jim. Making people feel comfortable in any company was part of his magic. His love of the theatre was in part a love for democratic spaces where everyone has a voice.

Jim once said his ambition was ‘to have everyone in the world in his address book’ (if not his bed!), but this approach to life was more than accumulating contacts in a rolodex. That kind twinkle I’d noticed in his eye? It was not faked: he’d learned a lesson from his father early on: ‘When you do something nice for somebody, forget it immediately. When someone does something nice for you, never forget it.’ Perhaps it was this attitude that took Jim from being the Louisiana son of an oil worker to the founder of Edinburgh’s Traverse Theatre and London’s Arts Lab.

Haynes grew up in Shreveport, Louisiana, where, according to his memoirs, he spent quite some time alone, bird-watching and reading the poetry of Dorothy Parker and Langston Hughes, whom he credits with ensuring he would never be a racist. He stole a comic from his local store but felt too guilty to keep it and so took it back. By the time he was eleven he was editing his own private newspaper, The Treetop News. His father’s work then took the family to Venezuela – a three-day journey from Houston, via Mexico City, Guatemala City, Managua, Panama City, Baranquilla, Caracas, Barcelona, and finally San Tomé. In Venezuela, Jim won perhaps his first award when he was voted the Best Liked Boy in School. By fourteen he was driving around on his scooter, learning to dance with local prostitutes and drinking a lot of rum and coke (he would later swear off alcohol).

If this sounds the perfect apprenticeship for a counter-culture champion, then imagine what it was like for a boy like Jim at Georgia Military Academy, where he rose to top of the class academically but held the lowest military rank and was frequently punished, indeed almost expelled, for slipping out to drink and chase girls. He went on to complete two years at Louisiana State University, before dropping out to ‘explore options.’ He promptly received his military draft papers, but before he could be summoned for basic training, he enrolled in the US Air Force, where he learned Russian and eventually requested a posting in ‘Western Europe, in the smallest possible military base, near a major city and university.’

Haynes would be sent to Edinburgh, to a listening base, where in 1956 the US Air Force was eavesdropping on Soviet activity. Not one to let fate decide his destiny, Haynes requested permanent night duty (5pm to midnight) and authorisation to study at Edinburgh University – as well as clearance to live off-base, in the city, at his own expense. It just goes to show, if you don’t ask, you don’t get. Permission was granted.

Haynes’ knack for making friends and influencing people soon kicked in. At his first Edinburgh Festival he met the artist Ricky Demarco and struck up what would become a lifelong friendship.

In 1959, after securing an early release from the Air Force, Haynes passed by a junk shop in Edinburgh’s George Square. He asked if it was for sale and agreed to buy it for £300. It would go on to become the first paperback bookshop in the UK, famous for selling Lady Chatterley’s Lover while it was still banned for indecency. A woman came in to request a copy and went outside to burn it. Jim ensured the incident was caught on camera and increased sales. He is the one with the moustache in the photo below.

A bit like San Francisco’s City Lights (whose owner, Lawrence Ferlinghetti, credited Jim’s audio magazine The Cassette Gazette as the inspiration for publishing Charles Bukowski), Jim’s Paperback Bookshop was more than just a purveyor of books. Its basement was dug out to become a tapestry and pottery gallery, and a corner in the back of the shop was turned into a small theatre space. One of Haynes’ first theatrical forays was the First Dialogue by David Hume Concerning Natural Religion which became the unlikely hit of 1960’s Edinburgh Festival. What’s more, Jim was instrumental in the success of the first Writers’ Conference at the Festival in 1962, finding accommodation for the writers in the line-up who included Norman Mailer, Lawrence Durrell and William Burroughs.

You could argue that Jim’s entire livelihood and reputation was built around sex. He claimed that it was falling in love with the actress Jane Quigley that made him co-found The Traverse Theatre as he needed a way to make her come to Edinburgh. He rented a space in James Court from a friend and within three years this small theatre dedicated to new contemporary plays had put on 110 shows, including 28 British and 33 world premieres. Traverse Festival Productions premiered the first English-language production of the Bertolt Brecht/Kurt Weill musical, Happy End – another hit that would later transfer to the Royal Court Theatre in London.

Despite winning the Whitbread Prize for outstanding contributions to British theatre, Haynes eventually quit the Traverse, after squabbles over his desire to open a sister theatre in London and around the open homosexuality of Jack Henry Moore, whom Haynes had brought in as a director. In London, Haynes procured a flat from George Orwell’s wife, writer Sonia Orwell. Allegedly the price she demanded was that he serve cocktails at her parties. She introduced him to Frances Bacon and Stephen Spender, and most of London’s political and artistic movers and shakers.

In 1966, The London Traverse put on Joe Orton’s Loot which would go on to win Best Play of the Year. In addition, Yoko Ono produced her first ‘happening’ there. Haynes borrowed £500 capital and started the International Times. Soft Machine and Pink Floyd played at the launch. Jim would soon devote himself entirely to the I.T. and to finding a new performance space without the restrictions of a conventional theatre. At 182 Drury Lane, he found it: two linked warehouses that would eventually be a cinema, gallery space, theatre and restaurant – altogether the storied ‘Arts Lab’.

Jim’s policy was to never say ‘No.’ He lived in a small corner of the second floor of the Arts Lab, and all London would come at all hours of the day and night to hang out. The Arts Lab hosted Steven Berkoff’s first professional production, an adaption of Kafka’s In the Penal Colony. David Bowie rehearsed there. Haynes dined with Brian Epstein and The Beatles.

With an uncanny ability to meet everyone before they were anyone, and to be in the right place at the right time, Jim became increasingly linked to mainland Europe as he took productions there. He was in Paris at the time of the 1968 uprisings and was among the first dozen ‘revolutionaries’ to seize the venerable Odeon Theatre on the Left Bank. In the same spirit, after trying and failing to rent London’s Bell Hotel, an empty space next to Arts Lab, he simply moved in illegally to squat the place. He would be ejected by the authorities, but this is widely credited as the start of the squatting movement in the UK. Likewise, Arts Lab-type ventures were springing up all over the country.

Other boundaries were pushed too. Jim founded the Handshake Press, producing authors’ work on the basis of a handshake contract. The man’s energy was unstoppable. After a struggle to secure film rights for Jack Moore’s experimental tribute to Marlene Dietrich, Haynes spotted an opportunity when Dietrich died a couple of years later. He rushed to the Cannes festival with a copy. When the festival director Gilles Jacob refused to programme it, Jim hired equipment and arranged with the Majestic Café to screen it at midnight. Jim would later describe a crowd of around 200 people, standing outside the café ‘in the softly falling rain to watch and cheer the film.’

Meanwhile Haynes had started teaching at the Université de Paris VIII and continued to do so for 29 years. When you consider just how conservative and stitched up French academia still is, this was quite a coup for a non-French speaker, whose honorary PhD from Edinburgh would only be awarded in 2017, well after his forced retirement, aged 65.

I must have met Jim shortly after that ‘retirement’. His affable presence, whether ambling up to comedy gigs at the Hotel du Nord or handing out plates of spaghetti at his ivy-covered atelier, said nothing of the extraordinary career he’d had and continued to have, winning awards and attending free speech events across the world, festivals from Edinburgh to Cannes to Frankfurt, as well as retaining an interest in experimental publishing, art and theatre until the very end.

Jim Haynes died on January 6th 2021, perhaps fittingly – Epiphany. Over his lifetime, he is said to have had more than 130,000 people to dinner. If you’re one of them (and even if you’re not) next time you hear the Beatles, or Bowie, or see Steven Berkoff play a Hollywood baddie, or listen to Germaine Greer (whom Haynes described as ‘one of the most articulate people I’ve ever encountered’) – think of Jim, seek out some softly falling rain, and raise a glass of pineapple juice.