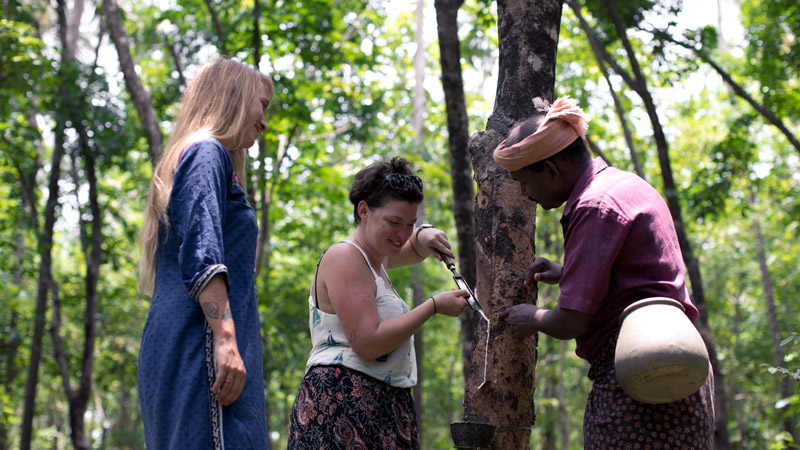 In Kerala, the state government working with the panchayats, village councils, focussed on creating additional livelihoods for communities, ensuring that they benefitted from the large numbers of tourists arriving in their midst, and reducing the litter resulting from tourism in the backwaters for which Kerala is famous. Following a series of experimental initiatives in four villages, only the one in Kumarakom was a great success, Kerala continued to develop ways of creating additional livelihoods through tourism. The Minister of Tourism challenged us to prove that we were befitting communities and we responded by undertaking a village census in Kumarakom in 2015 which demonstrated a major positive impact at the household level. The overwhelming majority of households were securing additional income from tourism and the community was now very positive about the benefits of tourism in their village.

In 2017 Kerala established a Responsible Tourism Mission which has rolled out the practices developed from Kumarakom across the state. At the core of its strategy are Village Life Experiences and producer groups which I wrote about here recently. Kerala won four Golds in the ICRT Awards presented at Bhopal in Madhya Pradesh last week. The RT Mission’s innovative project STREET (Sustainable, Tangible, Responsible, Experiential, Ethnic Tourism) is ensuring that tourism in community led through the panchayats and producing great experiences for visitors. Experiential tourism popular with domestic and international visitors alike.

“The Kerala Responsible Tourism Mission has demonstrated that tourism can protect water bodies with the strong involvement of the community, and if the community can find a livelihood from the water street they will protect the water body. At Maravanthuruthu, a 3 to 4 km stretch of 18 Canals, three rivers and a Backwater body were all rejuvenated. This initiative helped to recharge the ponds and wells of the area and now the water can be used for drinking and food processing. Future plans include country boat trips, rowing and mechanised shikkara trips, houseboats, floating restaurants, floating Kootthambalam (theatres). Floating markets, traditional and modern fishing experiences and lifesaving teams.”

It is fair to say that Kerala established Responsible Tourism in India. Madhya Pradesh has learnt from  Kerala and adapted the Responsible Tourism principles to deliver on local priories in communities across the state. The Responsible Tourism Mission there has based its work on six core values: community involvement, transparency, fair distribution of resources, equal opportunities for all, environment conservation and women’s empowerment. One of the highlights of my was participating the presenting their licensed and certificates for 12 women who are now qualified to drive with tourists in the protected areas.

One of Madhya Pradesh’s four gold awards was for creating safer spaces for women for an initiative which, in the words of the judges, “demonstrates what can be achieved when the Tourism Board, Ministry of Tourism, Ministry of Women and Child Development, UN Women will work together to provide a gender-sensitive tourism environment in the state. This is the first tourism project sanctioned by the Ministry of Women and Child Development, GOI, under the Nirbhaya Scheme. The objectives of the project are to provide a safe, secure women-friendly environment in and around tourist destinations; to enhance women’s confidence to visit destinations without any fear for their safety; to use spatial design to create women-friendly spaces;  to provide self-defence training for women and girls; and create job opportunities for women through employment and self-employment activities in tourist destinations.”

Yesterday with Manisha Pande of the ICRT India Foundation we met with the Maharashtra Tourism Development in Mumbai and it is evident that Responsible Tourism is taking root in this state too. Responsible Tourism is working well because governments at state and panchayat levels is working with communities and the private sector both to enrich the tourist experience and the local communities they comes to visit. Now in three states tourism is being made better, making better places to live in and better places to visit.

India has emerged as the world’s leading destination for Responsible Tourism demonstrating what can be achieved when communities, government and businesses work together to make tourism better for all stakeholders. In both Kerala and Madhya Pradesh the Responsible Tourism Missions are reporting in detail on both their efforts and their impacts. These are no longer projects, they are programmes supported and funded by government worktime with communities to deliver real change.

In 2021 India won four of the six Global Responsible Tourism Awards presented at WTM, London. In the ICRT Awards for India this year some very strong contenders have emerged and been recognised. We’ll see who wins the Global Awards this year on at WTM November 7th .