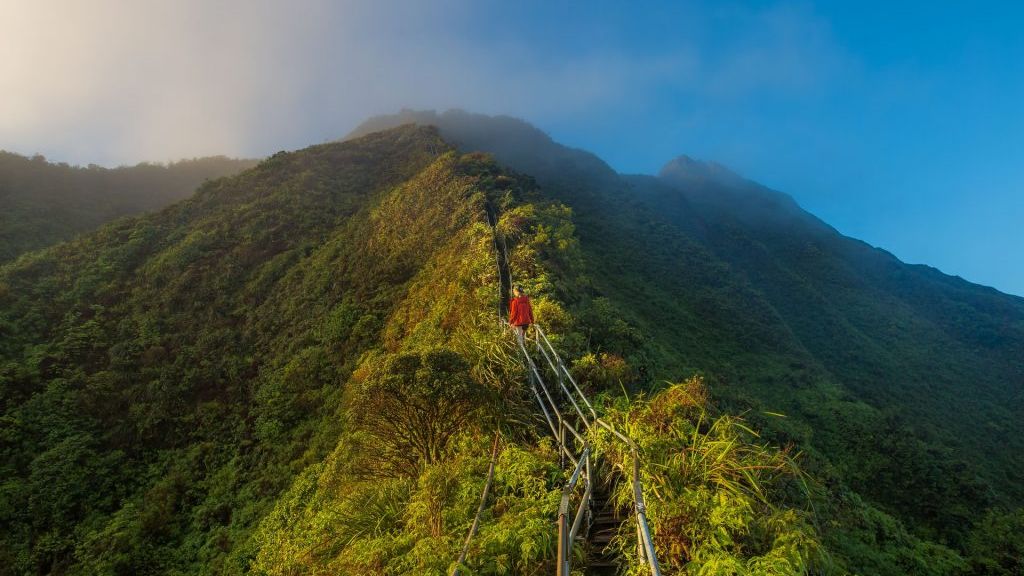 Hawaii’s famous “Stairway to Heaven” may be removed

“Slow Travel” is here to stay

Hawaii’s famous Haiku Stairs are likely to be removed next year, CNN reports, after a Honolulu City Council meeting to discuss ongoing issues with the site. Also known as the Stairway to Heaven, the Haiku Stairs were closed to the public in 1987 but hikers and influencers have not obeyed the rules and continued to enter the area.

The Stairway to Heaven is 3,922 steps high, on a hill of lush nature on the island of Oahu, in the Hawaiian archipelago. In 1943, a couple of years after the Japanese attack on Pearl Harbor, a top-secret antenna was installed.

With it, a high range radio was set up to transmit information to US ships. This path, which also had its own cable car, would later be transformed into the fascinating and extensive Haiku stairway.

After the war, in the 1950s, the facilities were used to create a second transmitter, this time of the “Omega” type, a system famous for being the first with a worldwide range. It was the prequel to the satellite systems.

At that time, the wooden steps and handrails were replaced by metal ones, as well as some ramped passages. Thus were born the 3,922 steps that can be seen today, in the middle of an absolutely imposing landscape where nature reigns. And centimeters from the sky.

At the end of the 1990s, a long waiting period began: the pass was closed, as was the radio station. While the Haiku stairways may seem like a remote and ignored corner of the Pacific, they carry a flower of history.

And the legend has continued to be written: even though Hawaiian authorities have never officially reopened the site, many hikers see the stairways and simply climb up. They take pictures and spread the word about this incredible landscape.

According to CNN, a 24-year-old hurt his knee and had to be airlifted out this spring. On September 8th, the Honolulu City Council voted in favor of removing Stairway to Heaven for good.

The measure was then sent to Honolulu Mayor Rick Blangiardi, who is expected to approve the removal of the Haiku Stairs. According to CNN, he’d have to allocate $1 million of the city’s budget to cover the expense. He has 60 days to make a final decision.

There is an Association of Friends of the Haiku Stairs, which pushes against all odds for the official reopening of the site and the refurbishment of the stairs, this time for tourist and sporting purposes.

They discourage more adventurers to take on the trail on their own. With its dense vegetation and the solitude that reigns in the environment, it is not a place where one would want to get off the path and get lost.

From time to time the association carries out voluntary maintenance work on the trail and invites those interested to join in, weeding and repairing areas that from time to time are devastated by storms and other inclement weather.