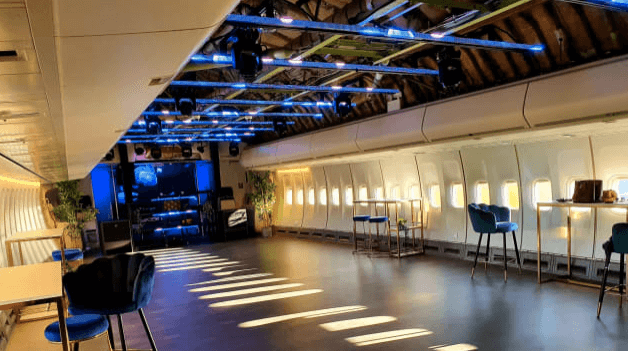 The pandemic has caused airlines to bring forward the retirement of different aircraft. British Airways, for instance, hastened the decomissioning of its Boeing 747s, even those that had been preserved in their retro livery. However, one of them was recovered and given a second life. The 747 with the classic Negus livery was purchased for £1 sterling and converted into a bar/event lounge.

This Boeing 747 was purchased after its retirement by Costwolds Airport for just £1 pound. Its new owners invested close to £500,000 to remodel it until they left this 747 as an amazing bar that can also be used as an event hall. Now this really is the “Queen of the party”. In fact, one couple has already booked to celebrate their wedding in this ex-British Airways Boeing 747.

I think it’s the most beautiful one they’ve ever produced.

The plane has retained its original design mainly allowing for public tours and even school tours. However, part of the 747’s Economy Class was removed to create the event lounge and the galley is now a bar. According to Costwolds Airport Director Suzannah Harvey, the aircraft arrived in October 2020 and since then they got to work on this Queen of the Skies.

“It took six weeks to do the negotiations for the contract,” Harvey told CNN. “We have a duty of care to maintain her until it is uneconomically viable with any deterioration. But hopefully, she’ll be with us for many years and generations to come.”

Harvey added that the dream of converting the 747 British Airways into an event space was achieved thanks to a number of supporters. As he told the Daily Mail they received support from a number of volunteers including engineers currently working with British Airways. So with all the support and half a million pounds later, the Boeing 747 Negus that flew for British Airways had its life turned around and is now a bar.

The refurbished Boeing 747, which is of the 400 variant, was delivered to British Airways on February 15, 1994 and had the registration G-CIVB. This Queen performed 13,398 flights and completed 118, 445 until April 2020 when she made her last flight; her farewell was with a flight between Miami International Airport (MIA) to London Heathrow (LHR).

According to CNN, several 747s have been decommissioned as airlines bring forward retirement dates for older aircraft due to the pandemic. KLM, Air France, Delta, United and British Airways have all retired their 747 fleets in the past two years.