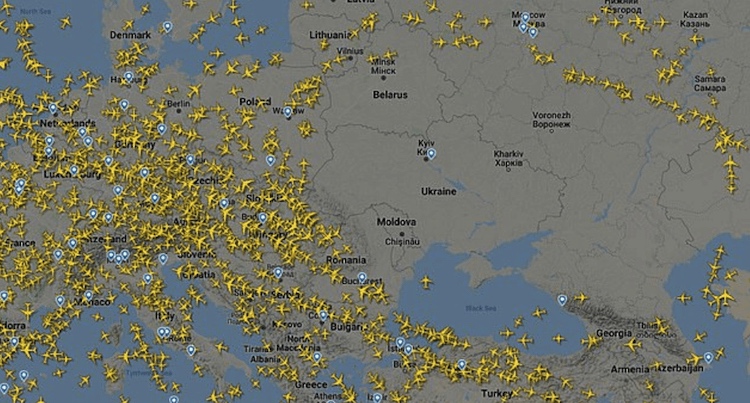 Delta Airlines accused of moving black woman to back of plane

Dozens of flights are being diverted around Ukraine after airspace was closed following Russia’s invasion, which started on Thursday February 24th. The Daily Mail reports that an area as large as 1,600 km wide is currently being avoided because of the conflict.

Since the battle started, the Flightradar24 website has taken on a new importance as it shows the routes flying over the border between the two. Images from the site show there are no civilian aircraft in Ukrainian airspace and very few over neighboring Moldova and Belarus, where many Russian troops are positioned.

According to the Daily Mail, the European Union Aviation Safety Agency (EASA) has announced that airspace in those two countries, within 100 nautical miles of their borders with Ukraine, could pose safety risks.

With flights compromised, many people are turning to the Flightradar24 service to follow the evolution of this war from another perspective. The number of users accessing the site is, however, becoming too high. Some people have to wait 25 minutes before the image of the map loads.

The website service allows users to see, in real time, the worldwide air map and even track the journey of a particular flight. It can be used via a browser, but there are also apps for Mac OS, iOS and Android.

The current situation not only compromises travel that would pass over Ukraine but rather the entire European airspace. The Daily Mail reports that an airplane from Israeli airline El Al flying from Tel Aviv to Toronto had to make a sudden U-turn out of Ukraine’s airspace around the time of its closure. A LOT Polish Airlines flight from Warsaw to Kiev also had to return to Warsaw around the same time.