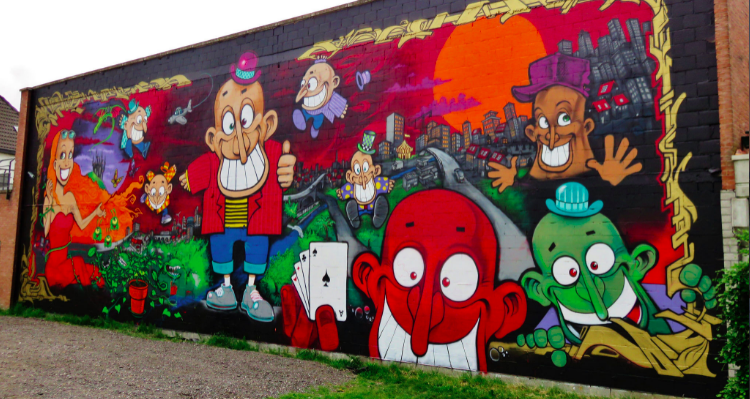 The city of Ghent in Flanders, Belgium, is a known tourist attraction for many reasons. However, beyond the stunning architecture, quaint streets and beautiful canals, the city offers something else which draws people in: street art. Demonstrating the city’s energy and vibrancy, the walls and buildings of Ghent are a canvas for artistic expression and cultural statements, inviting us in to explore and interpret as we wander.

A great way to experience the street art of Ghent is to follow the ‘Sorry, not sorry’ street art plan of the city, either by bike or on foot, which shows you the best of the city’s colourful graffiti and offers background information on the street artists and their incredible works. The street art map below shows just how much there is to see in the city and is downloadable here, or you can take one of several street art guided tours on offer from the guides’ associations which will take you past dozens of graffiti works.

For a smaller dose of the impressive street art on display around Ghent, take a wander down the city’s colourful and ever-changing graffiti alley. The car-free Werregarenstraatje is in the centre of Ghent and is a graffiti tolerance zone, meaning that although officially it is not permitted to paint pieces and tags here, the authorities turn a blind eye. The tolerance zone emerged during the Ghent Festivities in 1995 as a graffiti project with a limited number of works on the walls, and the Werregarenstraatje quickly earned the nickname “graffiti street”. There are also now three other zones in the city where people can practice their street art, as the graffiti street space for experimentation has been so well used. Nowadays, the street provides a public canvas for young street artists to experiment with and create their own artworks, leaving the alley filled with a cacophony of colours and patterns. The great thing about it is that it never looks the same from one week to the next, so a visit here will always be entirely unique!

The year 2020 saw Ghent’s campaign “OMG! Van Eyck was here”, during which for a whole year everything in the city became a nod to Van Eyck and his Mystic Lamb masterpiece, an icon of the city. Ghent welcomed several top national and international artists to brighten up the city center with works of art inspired by the Ghent Altarpiece.

The street artists involved came from all over the world and included Spanish artists Isaac Coral and Taquen, Argentinian artists Hyuro and Pastel, Belgian STROOK, Argentinian-born Francisco Bosoletti, French duo Monkey Bird Crew and Cee Pil and ROA from Ghent. You can take a look at more of the works created for the campaign here.

4. The beginning of street art in Ghent

Graffiti as an art form first emerged at the end of the 1970s in certain neighbourhoods around Brooklyn, USA, and in the mid-80s the trend spread to Europe where it quickly caught on in Ghent. At the end of the decade, graffiti artist Phase became well-known and gained a reputation as one of the first graffiti artists in Ghent, often even called the founder of the Ghent street art scene, and his colourful graffiti is still visible.

Following the success of the Werregarenstraatje Graffiti Street, around the 2000s Stad Gent started working with their three-track policy, in which tags were cleaned up but artistic graffiti was also sought out. They organised graffiti jams together with Graffiti vzw, and in the meantime, certain artists continued to grow. Dries Van Melkebeke from Cultuur Gent explains how the city was lucky with talents ROA and Bué the Warrior, and with the varying designs graffiti soon started to appeal to a broader public.

The early generation of graffiti artists didn’t just boost the popularity of the art form, but also influenced artists to come, as was true in the case of Keith Haring and David Neirings. Keith Haring was an American artist whose pop art emerged from the New York City graffiti subculture of the 1980s, and following his friendship with Ghent-born David Neirings, visited and exhibited in Belgium various times. In his youth, David Neirings an artist and sculptor from Ghent, was inspired by Haring’s work and wrote to tell him so. A friendship followed and Neirings was able to travel the world during his adolescence alongside one of the greatest American artists of his generation!

It is this inspiration and passing of knowledge between generations that enables the city’s street art scene to thrive, and Ghent encourages this further by being home to several art schools; Kask, Luca and HISK. These schools bring many young creative people to the city, boosting the city’s art scene and enabling young adults to reach their artistic potential. In years to come, it will likely be their work that covers the walls and buildings of Ghent, creating impressive attractions and making bold statements for all to see and admire.